Taxonomy: There are two subspecies recognized, brooksi of the Queen Charlotte Islands of western Canada, and acadicus, occupying the remainder of the species’ North American and northern Mexico range (Gill and Donsker 2017).

Resident: There is no unequivocal evidence that this species is a resident in Nebraska. Rasmussen et al (2020) suggested that males or pairs “probably maintain territories throughout the year”, but that further study was needed. Natal philopatry is very low. Data in Rasmussen et al (2020) from British Columbia and southwest Idaho showed that none of 83 nestlings and only six of 88 adults, including males and females, returned in subsequent years. In Nebraska in successive summers, however, 2014 and 2015, the same female was netted in the Wildcat Hills, Scotts Bluff Co; she successfully fledged four and six young in those years, suggestive of adequate prey availability that might have allowed overwintering (Mollhoff 2018). Throughout its range, it is generally resident, except at higher elevations and in the northern parts of its range, where it tends to be nomadic based on prey availability (Rasmussen et al 2020). It was considered a “permanent resident” in the Black Hills of South Dakota (Tallman et al 2002), but the authors left this term undefined and may simply mean that the species, but not necessarily the same individuals, can be found all year. Surveys in the Black Hills found this species to be “by far” the most common owl, detected on 93% of survey routes Mar-May (Drilling 2010). The Second South Dakota Breeding Bird Atlas (2008-2012) found this species for the first time in the South Dakota section of the Pine Ridge (Drilling et al 2018).

Departure of wintering birds presumably occurs in Apr, although Rasmussen et al (2020) stated that spring movement in the Great Lakes reagion ends in late May and early Jun.

Calling begins in late Feb when departure is imminent (Don Poggensee, personal communication). Calling is heard every year mid-Feb into Apr in the cedar canyons of southeast Lincoln Co where the species winters, although calling was heard as early as 26 Jan 2018, record early 12 Jan 2019, and on 30 Jan 2020 (Linda Deeds, personal communication). See also Winter, below. One in downtown Ponca, Dixon Co was calling 25 Feb 2018 at a location where it had been heard “at different times”, and calls were recorded in Douglas Co 27-29 Mar 2020.

Summer: Until recently, the only documented report of breeding in Nebraska was of a pair of adults with three fledged young at Valentine NWR, Cherry Co, 24 Jun 1978 (Mollhoff 2005). Prior to this, there had been no indication that summering birds occurred anywhere but on the Pine Ridge, where, although calling birds on territory had been heard 16 Apr-1 Jun from Chadron SP, Dawes Co westward (Rosche 1982; Johnsgard 1979), there was no documented evidence for nesting there (Ducey 1988).

This situation changed abruptly in spring 2008 when a series of survey transects in forest habitats in the Pine Bluffs area, Kimball Co, Wildcat Hills, Scotts Bluff and Banner Cos, and the Pine Ridge in Sioux and Dawes Cos, yielded a rather amazing estimate of 20-22 breeding pairs, based on triangulation of calling birds to estimate territories in Apr-early May (Bly 2008). No attempt was made to locate nests; preferred habitat was ponderosa pine woodland with high relief (Bly 2008).

Wayne Mollhoff erected several nest boxes in suitable habitat in the surveyed areas (Mollhoff 2018). On 17 Apr 2014, Mollhoff found five eggs in a box in the Wildcat Hills; there were four young on 10 May (Mollhoff 2014) and an apparently fledged juvenile at the nest box 25 May. This nest box was in use again in 2015; five of the six chicks were banded 14 May; the sixth chick had fledged. “Barks and screeching” were heard near Wildcat Hills NC 19 Sep 2015 and a two-year-old female was netted 20 and 27 Sep that had been banded in 2014. A different nest box there had six eggs on 17 May 2017; all hatched and were banded, but two were later cannibalized. In 2015-2017, nesting birds were found in three additional locations where nest boxes were erected, but no nesting was reported in 2018 and none of Wayne Mollhoff’s many nest boxes were used in 2019, considered by Mollhoff a four-year low in the population cycle. One nest box in the Wildcat Hills was occupied in 2020, and chicks were hatched rather late 5 May (Wayne Mollhoff, pers. comm.); calling was heard 5 Jun. Calling single birds were recorded in the Wildcat Hills 23-30 May 2021 and 20-21 May and 3 Jun 2022. Older reports from Scotts Bluff Co are of one at Riverside Park Jul 1985, one in a Scottsbluff yard 17 Aug 1985 (Cortelyou 1986), and one found near death in Gering late Aug 2000.

On 15 Feb 2015, an adult was incubating in a nest box in West Ash Canyon, Dawes Co; with first egg dates estimated at 5-6 Feb. This is approximately 6 weeks earlier than the 2014 Scotts Bluff Co nesting and reportedly record-early for the species by approximately two weeks (Mollhoff 2018). This nest produced five chicks that were banded 26 May. One was banded in East Ash Canyon, Dawes Co 1 Sep 2020. Breeding was also documented at another Dawes Co location when three fledged young were photographed two miles south of Chadron SP 18 May 2015 (Wayne Mollhoff, pers. comm.; Mollhoff 2018). One was heard near Chadron, Dawes Co 17 May 2022. Breeding was documented elsewhere on the Pine Ridge at Gilbert-Baker WMA, Sioux Co on 4 Jun 2020; calls were heard, and a photo taken by another camper the evening before was seen to be conclusive.  One was heard at Whiteclay, Sheridan Co 30 Mar 2022.

The Thomas Co breeding record as well as summer reports elsewhere suggest that breeding may occur over much of northern and western Nebraska (Mollhoff 2018). Because the last wintering birds leave by the end of Apr, territorial birds in May-Jun are of interest, as are reports Jul-Aug. The best evidence for likely breeding away from the Panhandle is from Lincoln, Antelope, and Knox Cos and the central Niobrara River Valley west to Cherry Co. Two or three were heard on a night survey of the cedar canyons in southeast Lincoln Co 16 May 2008, and calling birds were heard there 26 Apr 2014 and as late as 3 Jun 2015. A road-killed second-year bird was found near Grove Lake SRA, Antelope Co, 25 May 2002 (UNSM ZM18191, Brogie 2003), followed by the discovery of five calling birds in the upper Verdigre River and Merriman Creek watersheds in northern Antelope and southern Knox Cos 31 Mar-7 Apr 2004; birds were calling in the same areas 23 Mar 2012 and 3 Mar 2016. One was recorded at Niobrara SP, Knox Co 17 May 2022. Recordings were made in the Niobrara River Valley in Keya Paha Co 12 Jun 2019 and at Keller Park SRA, Brown Co 13 Jun 2019 (eBird.org). Suggestive of local nesting were four calling at Anderson Bridge WMA, Cherry Co 20 May 2018, and at the Mill Pond area at Valentine, Cherry Co calls were heard and recorded both north and south of the pond 10 Apr-12 May 2021 (eBird.org). It was reported in northeast Cherry Co 10 Jun 2017.

There are old reports of nesting in the Missouri Valley, none, however, since Carriker’s second-hand report of an alleged nesting, with no date, and only vague location listed (Nebraska City, Otoe County). We do not believe this nesting record is acceptably documented. It was originally reported by Carriker at the first NOU meeting in 1899, and later published in the Proceedings of the NOU (Carriker 1900). In the article, Carriker himself stated that he had never found a nest but was merely talking about a nest found by “2 other guys about 7 years ago.” (Wayne Mollhoff, pers. comm.; Silcock 1979, Ducey 1988). There was, however, a successful nesting in Doniphan Co, Kansas, in 1951 (Thompson et al 2011).

Arrival is in mid-Oct; earlier reports may be of birds that summered locally.

The Brenner and Jorgensen study (2021) compared well with data from Hitchcock Nature Center showing the first week of Nov to be the fall migration peak at this latitude. Jerry Toll (pers. comm.) has banded saw-whet owls 2009-2017 inclusive at Hitchcock Nature Center, Pottawattamie Co, Iowa, only a few miles east of the Missouri River from Washington Co, Nebraska; his study showed earliest arrivals 8, 10, and 10 Oct (average 15 Oct) and departures 26, 26, and 28 Nov (average 20 Nov); netting is ended when there have been three straight sessions of no captures, usually around Thanksgiving.

Winter: Winter visitors occur statewide, although most reports are from population centers; birds may be found in either coniferous or riparian woodland. Good numbers winter in the cedar canyons of southeastern Lincoln Co (Linda Deeds, pers. comm.); on 20 Feb 2020 13 were heard “calling along the road with 1-3 birds at each of our stops in areas of dense cedars. Eleven out of the thirteen were singing spontaneously with the other two responding to playback, and twelve out of the thirteen were along a 2.5 mile stretch of the road” (Sam Manning, eBird.org).

In nearby Ida County, Iowa, Don Poggensee has tracked wintering saw-whet owls for almost 30 years, and Jerry Toll has banded many of them. Interestingly, banding data show that all birds are HY individuals, which use the exact same roosting trees that were used by previous years’ HY birds. Perhaps related is the presence of porphyrins in the underwing coverts and flight feathers that are visible in UV light and are used to age these owls (http://www.birdfellow.com); deposits of porphyrins may be left on preferred winter roost trees that allow their subsequent re-discovery by a new group of HY birds (Shari Schwartz, pers. comm.). 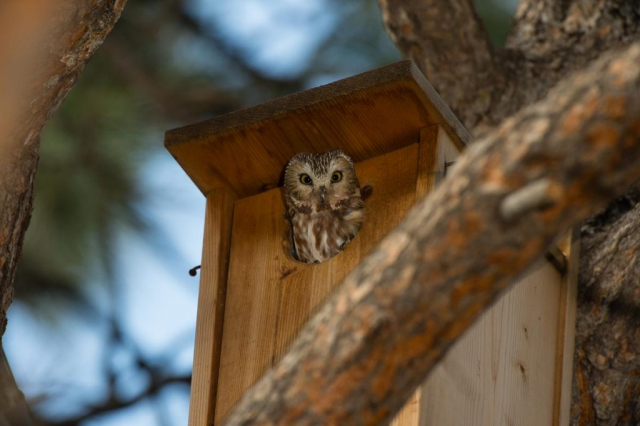 Carriker, M.A., Jr. 1900. Some notes on the nesting of the raptors of Otoe County. Proceedings of the Nebraska Ornithologists’ Union 1: 29-34.