Taxonomy: No subspecies are currently recognized (Pyle 1997, Whitaker and Eaton 2020).

Most reports with earlier dates are undocumented and are probably of misidentified Louisiana Waterthrushes.

Migrants arrive in late Aug and depart by late Sep.

There are about 36 reports away from the east in the period 18 Aug-24 Sep; slightly more than half of these reports are from the Panhandle.

Comments: There is an extraordinary report of a female with an active brood patch banded in Fontenelle Forest 15 Jun 1983 and still present 18 Jun (Green 1985). However, the information reported in Green (1985) is apparently incorrect; based on data archived at the Bird Banding Laboratory, this Northern Waterthrush was actually banded 31 May 1982 (Danny Bystrak, personal communication, 2016).

The identity of a well-described waterthrush at Fort Falls Trail, Fort Niobrara NWR, Cherry Co 10 Jul 2019 was, however, equivocal; it would be very early for a migrant Northern and far out of range for a breeding Louisiana. However, breeding Louisiana Waterthrushes were discovered there in 2021 (see that species).

There is no evidence that this species ever bred in Nebraska; Mollhoff (2022) presented a detailed discussion of the few purported reports. An often-cited report is that Northern Waterthrush has bred in Sioux Co (AOU 1983; Bent 1953), apparently due to a statement made by Ridgway (1902) when he described the western race notabilis and mentioned Sioux Co, Nebraska as part of the southeastern extent of the breeding range. It is not known upon what basis Ridgway made this statement, although Northern Waterthrush does breed as close as Medicine Bow National Forest in southeast Wyoming and rarely in north-central Colorado (Faulkner 2010, Andrews and Righter 1992, eBird, accessed 13 Nov 2016). 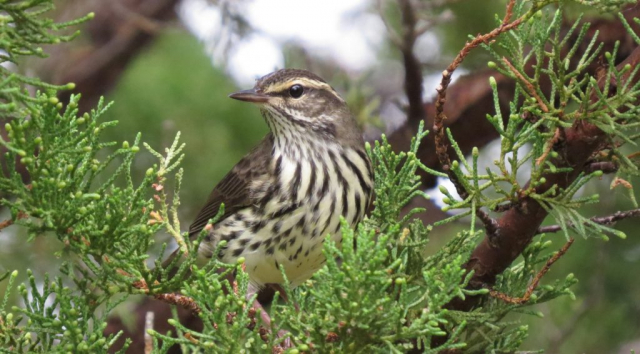