Taxonomy: Most authors recognize four subspecies world-wide; two of these occur in North America: carolinensis in the United States and Canada, and ridgwayi of Cuba, Belize, and the Bahamas (Bierregaard et al 2020).

Ospreys in Australasia, subspecies P. h. cristatus, have been raised to species status as Eastern Osprey based on genetic and morphological differences (Gill and Donsker 2017, Christidis and Boles 2008); this change would not affect North American taxonomy unless the proposal by Wink et al (2004) to raise all four subspecies to species level is adopted. AOS has not adopted the change; we follow AOS.

Changes Since 2000: Osprey expanded into Nebraska as a breeder beginning in 2008; there are several nest sites in Scotts Bluff Co, with more establishing both in the west and east. This pattern is part of a general increase observed in many areas of the United States in recent years; since 1990, breeding numbers have increased 50-100% in many areas of the United States, likely in response to increased habitat (e.g., reservoirs and other impoundments), availability of nesting platforms and other artificial nesting sites, ability of this species to habituate to human activity, and its broad diet (Bierregaard et al 2020).

Late dates above are away from known breeding locations.

Summer: According to Bruner et al (1904), Osprey formerly bred at least once along the Missouri River near Rockport on the Washington-Douglas Cos boundary (Ducey 1988), but no further details are available. Despite successful hacking programs in Iowa since 1997 by the Iowa Department of Natural Resources and since 2003 by the South Dakota Game, Fish, and Parks Department, there were no known nesting attempts for Osprey in Nebraska until 2008. No Osprey hacking programs have been initiated in Nebraska.

The first modern nesting attempt was at Winters Creek Lake, Scotts Bluff Co in 2008 and resulted from natural expansion into the state from Wyoming along the North Platte River into Scotts Bluff Co. The initial nesting attempt and another at the same site in 2009 and several additional attempts at other nest sites in Scotts Bluff County were all unsuccessful through 2014. The primary cause of failure was destruction from severe storms. In addition, nesting Ospreys present a challenge since they have a propensity for constructing nests on power poles, which can create electrical shorts often resulting in power disruptions and even fires. A pair building a nest on a power pole at the Riverview (formerly Riverside) site a mile west of Scottsbluff 15 Apr 2011 apparently was electrocuted before 1 May; the local power company then proceeded to install a 65-foot-high pole and platform which has resulted in successful nesting since. Such installations by power companies have likely promoted Osprey range expansion in Nebraska.

Finally, in 2015, breeding success was achieved in Nebraska at four sites, all of which had had several years of failure, three in Scotts Bluff Co and one in Keith Co. Since 2015, sites in Scotts Bluff Co have continued successfully, with as many as eight nests reported in the county in 2021 (Kathy DeLara, pers. comm.). The Keith Co site at Keystone is also continuing successfully.  Nesting status by year since 2015 is summarized at Osprey nesting by year.

Weather events continue to be major factors affecting nesting success in the west. The Shannon-Berggren nest (Fig 1, below) was unsuccessful in 2016 due to high winds and a nest platform was installed nearby by the power company. In 2019, all six Scotts Bluff Co sites were active, although two, Riverside and Sugar Factory (Fig 1, below), were destroyed by hailstorms (Kathy DeLara, Dan and Jamalee Clark, pers. comm.). In Keith Co a pair was building a nest on a platform erected by Midwest Electric on Nebraska Public Power District land near Keystone, Keith Co 21 Apr-1 May 2011; this attempt and one the following year were unsuccessful, however. A new nest not far from the Keystone nest was established in 2020 on a power pole and had three eggs by early Jun but was abandoned by the end of the period; power company personnel erected a nest pole there to attract the birds away from power equipment.

In the northeast, there had been indications of Ospreys hacked in South Dakota making nesting attempts, although none were successful until 2017, when a pair was nesting 21 Jun on a tower at Omaha Public Power District’s (OPPD) Fort Calhoun station, Washington Co. Apparently, nesting had occurred there four years earlier based on information provided by OPPD. This nest has continued successfully, and a new nest site in the east in 2021 was on a cell tower at Liquid Trucking in Cass Co; see Osprey nesting by year. This Cass Co nest was tended by a pair of adults seen nestbuilding 15 Apr 2022 for the second season.

At Summit Lake, Burt Co, a single bird was nest-building on a tall cell phone tower 6 Jun 2013; it was carrying a band indicating it was a bird hacked in South Dakota in 2008. Three birds were at this site 2 May 2014, one with a blue marker indicative of one of the 2013 birds returning to the site. It appears nesting attempts at this site have ceased. An individual was building a nest on a power pole at Powder Creek Reservoir, Dixon Co 13 May 2006, but the outcome, or whether indeed two birds were present, is unknown. A bird hacked from the South Dakota side of Lewis and Clark Lake, Knox Co was in southwest Sarpy Co 22-28 Jul 2009, indicative of wandering by a presumed immature non-breeder.

There are about 26 reports in the period 10 Jun-19 Jul away from known breeding locations, distributed statewide. Most are from large reservoirs and probably represent unpaired birds prospecting for mates and nest sites. Juvenile Ospreys do not leave their wintering areas until their second spring and many stay on until their third spring (Bierregaard et al 2020).

Numbers begin to increase above those of wandering summer birds in late Jul; early dates above are away from known breeding locations.

One counted on the Grand Island CBC 18 Dec 2004 was an injured bird found near Doniphan in Hall Co; it was recovered and taken to a rehabilitator but died a few weeks later.

There are scattered additional reports late Dec through Feb, but none are documented and some, if not all, are likely the result of identification errors. 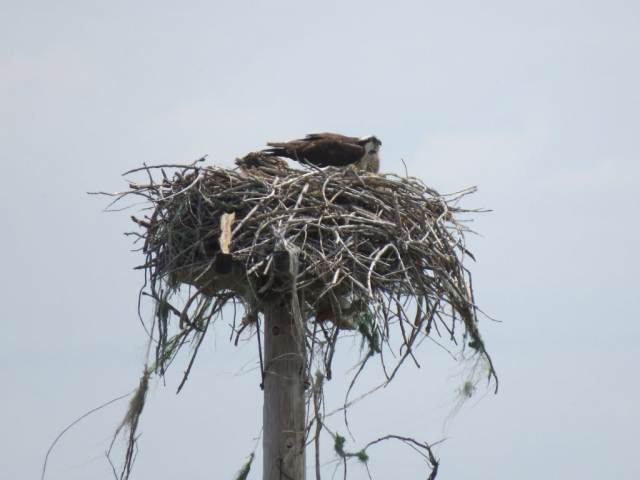 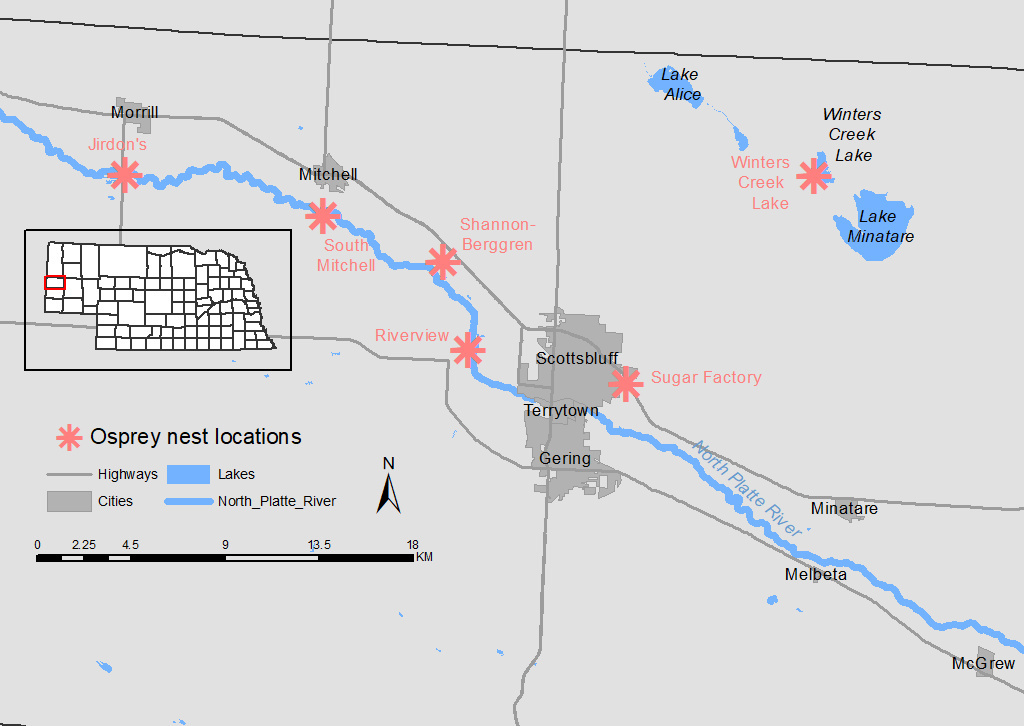