Taxonomy: Three subspecies are recognized (Pyle 1997): cinereus, breeding in the Rocky Mountains from southern Alberta to Colorado and Nebraska, aurocapilla, breeding from eastern British Columbia to Nova Scotia and Georgia, and furvior, breeding on Newfoundland.

Subspecies cinereus breeds in the Panhandle, and as far east as “central Nebraska (Camp Sheridan)” (AOU 1957). This locality is in extreme northwest Sheridan Co, some 19 kilometers (12 miles) south of the White River. Tordoff collected a singing male in Sioux Co on 19 Jul 1957, a specimen determined to be cinereus (Ford 1959).

Last dates above are from non-breeding locations.

Migration is from late Apr through late May.

Summer: This species breeds in upland forests such as mature oak-hickory woodlands associated with bluffs of the Missouri and Niobrara River Valleys and in deciduous woodlands in the canyons of the Pine Ridge. It is also found in appropriate oak-hickory habitat associated with the lower Elkhorn River and the Platte River in Douglas and Sarpy Cos. Recent evidence suggests that breeding may be occurring at NNF Bessey, Thomas Co.

Westward along the eastern Niobrara River Valley, Brogie and Mossman (1983) found numerous singing males and territorial birds in the Niobrara Valley Preserve in 1982 and considered the species a “probable nester.” There are several summer reports for these counties as well as Holt and Cherry Cos. Mollhoff (2001) showed breeding reports west to central Cherry Co; by 2016 (Mollhoff 2016), the range limit was unchanged although there were more westerly reports. Recent additional reports from that area are of four at Anderson Bridge WMA 19 Jun 2014 and one at the Road 16F river crossing 14 Jun 2016. The only report shown by Mollhoff (2016) between central Cherry Co and the Pine Ridge along the Niobrara River Valley was a single “Possible” report along the Niobrara River in eastern Sheridan Co. Presumably, due to its location, this report is assignable to eastern aurocapilla.

On the Pine Ridge, Mollhoff (2001) showed breeding reports only in Sioux and Dawes Cos, but by 2016 (Mollhoff 2016), breeding was confirmed in northwest Sheridan Co, suggesting eastward expansion of the Pine Ridge range. Rosche (1982) described Ovenbird as a “fairly common summer resident,” breeding in Sioux and Dawes Cos. Although it is usually accepted that Ovenbird requires rather extensive woodland for breeding, the western race cinereus, breeding on the Pine Ridge, may be adapted to woodlands of sharply limited extent. Andrews and Righter (1992) noted that in Colorado it breeds in “foothill riparian thickets.” One summered in such habitat at Wind Springs Ranch, southern Sioux Co, in 2010, although no evidence of breeding was noted.

Early dates above are away from known breeding areas. Earlier dates of probable migrants are 26 Jul 2012 Lincoln Co, and 29 Jul 2010 Lincoln Co.

A few reports in mid-Jul (see Summer) from areas where breeding is not known may be of early-departing adults, mostly males. According to Porneluzi et al (2020), “In Michigan, adults leave the breeding area as soon as the young can care for themselves. Immature birds remain on the breeding grounds until late September”. Time from egg laying to independence in Michigan indicates that adults would begin leaving around 20 Jul (Porneluzi et al 2020).

Migration peaks in late Aug and early Sep, and ends by early Oct. 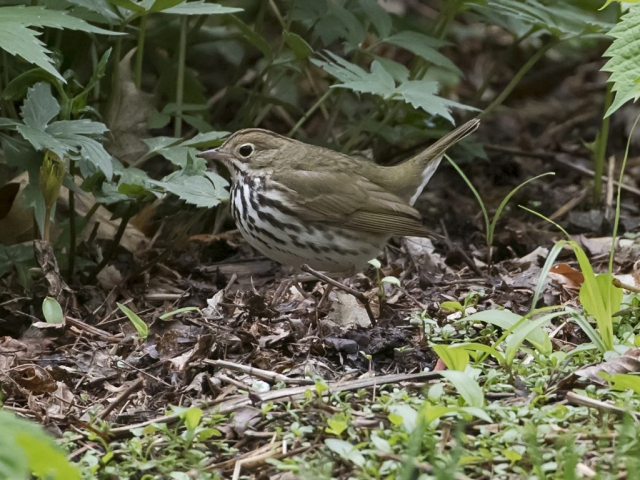