Taxonomy: No subspecies are recognized (AOU 1957).

Records: The Nebraska specimen cited above is on display at the Hastings Municipal Museum. The specimen was recovered “from an old case of birds found in a barn in Johnson County, Nebraska. It was taken in the vicinity of the town of Cook, in the eighties, and mounted by an amateur taxidermist…” (Brooking 1942, Bray et al 1986). The display includes an egg (HMM 26308) without documentation of provenance (Mollhoff 2022).

There is very little Nebraska information published regarding Passenger Pigeon. It was apparently a common although probably irregular migrant and summer resident in the eastern parts of Nebraska (Bruner et al 1904; Rapp et al 1958), which would have been at the western edge of its range (AOU 1998). It is generally considered to have been nomadic rather than migratory (Blockstein 2020). Coues (1974) stated “the birds reach across Nebraska, probably following the Platte River into Wyoming”.

Ducey (1988) cited a report by Maximilian near the mouth of the Niobrara River in May 1833, and Coues (1874) mentioned a possible nesting “near Sioux City” prior to 1874. In notes from I.S. Trostler to Bruner relating to Bruner’s 1896 list of Nebraska birds (Wayne Mollhoff, pers. comm.), Trostler (1896) noted two sightings: “one killed out of a flock of 15 or 20 by Hon. Edgar Howard of Papillion in woods 5 miles southeast of Papillion, Sarpy County, 9 Nov [18]95.”, and “Geo. W. Sabine saw flock of 15 Passenger Pigeons flying over his house in Omaha, morning of Nov 28, 1895.” Wright (2013) discussed provenance of a specimen in the World Museum, Liverpool, that was collected by F.V. Hayden at “mouth of the Big Sioux”, and so might have been collected in modern Nebraska. A rather fanciful article dated 28 October 1882, cited and republished online by Ducey (2013) and originally published in the National Police Gazette, describes a passenger train besieged by pigeons “myriad in numbers” about 20 miles west of Omaha. It is very likely that these were Passenger Pigeons. In 1893, Omaha sportsmen were still using them as targets for shooting tournaments, and in Nebraska they were still listed as a game bird in 1905 (James Ducey, pers. comm.). There are records for 1891 at Omaha and 1897 at Falls City (James Ducey, pers. comm.).

Comments: In Kansas it nested occasionally, only in small groups, unlike the huge nesting concentrations recorded in the Great Lakes states (Thompson et al 2011). It was more common in South Dakota, where it was “a fairly common to common migrant in woodlands in the east and along the Missouri River and its tributaries, but was less common as a breeding bird” (Tallman et al 2002). It was presumably exterminated from the [eastern USA] first, owing to clearing of forests and disturbance of nesting colonies; the last nesting colonies were in the western part of the range (Blockstein 2020). The species apparently declined throughout its range in the 1800s, catastrophically in 1870s and 1880s, and probably declined beyond point of recovery by the late 1880s (Blockstein 2020). The last wild birds of the species were taken in Ohio in 1900 and the last individual died in the Cincinnati Zoo 1 Sep 1914 (Blockstein 2020; AOU 1998; Bent 1932).

There is a small diorama including four adults and a nest with one egg at HMM; three of the adult specimens (HMM 36840 and 36841) were purchased in 1982 for display and the other, a male (HMM 26490) in 1947 from General Biology Supply for $75. None were collected in Nebraska (HMM accession records). 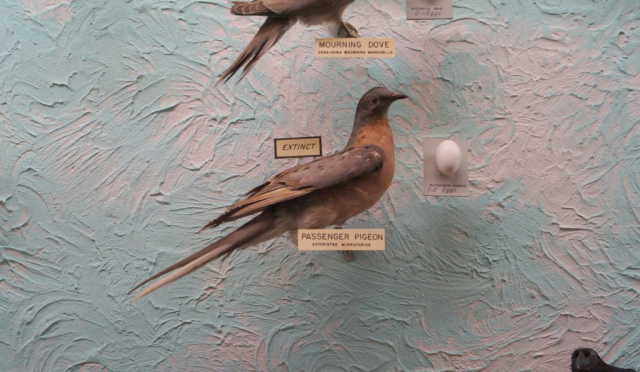 Photograph (top) by Joel Jorgensen of a Passenger Pigeon specimen, collected in the 1880s near Cook, Johnson Co. The specimen is housed and maintained at the Hastings Municipal Museum and was legally salvaged or collected. We thank Teresa Kreutzer-Hodson for facilitating the photographing of this specimen for the Birds of Nebraska – Online.

Coues, E. 1874. Birds of the Northwest: A handbook of the ornithology of the region drained by the Missouri River and its tributaries. Government Printing Office, Washington, DC, USA.