Some later Jun records are of injured birds, such as an adult at Harlan Co Reservoir, Harlan Co 20 Jun 2004. One of the late dates above is a specimen, UNSM ZM12663, collected in Lancaster Co 12 Jun 1910.

Arrival is in early Apr and peak numbers occur from the last week of Apr through the first two weeks of May. Large flocks are unusual.

Pectoral Sandpiper is increasingly rare westward; there are only about 40 reports west of Phelps Co, five of these in 2022. Rosche (1994) considered the species casual in spring and listed only two records from the Lake McConaughy region. Brown and Brown (2001) noted “a few records” 22 Apr-30 May in the Keith Co area.

Average stopover period in Nebraska during spring was 14.2 days (Farmer and Wiens 1999).

Adults, unusually in shorebirds, led by males, arrive in Jul, with peak numbers in late Jul, and juveniles peak in mid- to late Aug. There is a gradual decrease in numbers during Sep and Oct, but only about 10 reports for Nov. There are considerably more reports from the west during fall than in spring. 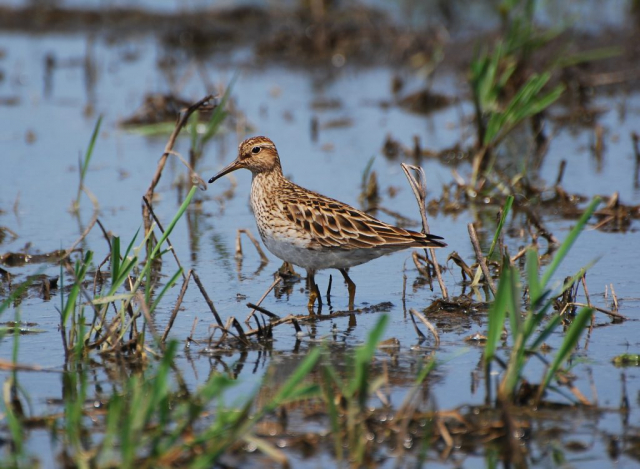