Taxonomy: There are 16-19 subspecies recognized world-wide, three of which occur in North America: tundrius, breeding from Alaska to Greenland, pealei from the Aleutians to southern Alaska and southwest Canada, and anatum, in North America south of the tundra to northern Mexico (Gill and Donsker 2017).

Although earlier published information (Bruner et al 1904, Rapp et al 1958) suggested that only the widespread subspecies anatum has been found in Nebraska, the paler northern subspecies tundrius occurs also. There are three specimens of tundrius in the UNSM collection. An immature tundrius was in Phelps Co 2 Sep 2002, an emaciated tundrius was picked up and photographed in Buffalo Co 22 Jun 2013, and in the Rainwater Basin tundrius is predominant in migration, with only a small number of observations of anatum (Jorgensen 2012). Tundrius would be expected to occur in migration in Nebraska (Palmer 1988); it is the commonest of the subspecies occurring in Missouri during migration (Robbins 2018).

The genetic heritage of captive stock used in introductions and now-established populations in Omaha, Douglas Co and Lincoln, Lancaster Co since the 1980s and 1990s respectively is uncertain, although wild birds which paired with reintroduced birds are thought to be of the subspecies anatum. Wheeler (2003) stated that introduced birds came from captive-raised anatum from the western US. The presence of an immature resembling the dark, heavily streaked west coast subspecies pealei in Dakota Co 15 Aug 2014 was thought by the observer to result from the reintroduction efforts in eastern North America.

Resident: Resident birds in Nebraska descend from birds reintroduced to the Midwest, including from hacking efforts in Omaha during the 1980s. As of 2021, there are four known breeding locations, three in Omaha and one in Lincoln (see Nebraska-Peregrine-Falcon-pairs-and-productivity-by-year for more information). Most winters, at least one adult is observed in the vicinity of the nest sites.

Efforts to establish breeding birds in Omaha began in 1988 when six young birds were hacked at the WoodmenLife Tower, 18th and Farnam (Cortelyou 1988). Two died, and the others departed in fall, the last bird in early Oct. The first modern Nebraska nesting was at the Woodmen Life Tower in 1992, when a male from the 1988 release returned with a female which had been released in Des Moines, Iowa in 1991 (Morris 1992). This pair fledged three young that hatched 11-13 Jun. Nesting has taken place at the WoodmenLife Tower each year since, involving at least two successful pairings of a bird fledged in Omaha with birds released from other locations) for example, see Winter).

The Mutual of Omaha building at 33rd and Farnam was also used as a hack site in the late 1980s, but there had been no subsequent nesting activity there until 2017. The male, Orozco, was hatched at the Nebraska State Capitol in 2015 and the female, Chayton, was hatched in Kansas City, Missouri, in 2014. The pair laid two eggs, which hatched, but the eyases died. However, in 2018 Chayton departed and paired with Mintaka at the Woodmen Tower in Omaha. Nesting was successful in 2019-2021 with four young fledged each year with parents Orozco and Sierra.

In 2015, nesting was confirmed at the Omaha Public Power District’s North Omaha Power Station where a nest box had been placed on a smokestack several years before. The female of this pair, Clark, hatched at the Nebraska State Capitol in 2012, but had been assumed to be a male due to a banding glitch. The male was unidentified. Nesting also occurred at this location in 2016, copulation was observed 17 Feb 2017, and one was there 12 Apr 2018 but had been “hard to find this spring” (Jerry Toll, personal communication); nesting was successful in 2019 with three young fledged, although Clark was not the female in this pair (Jerry Toll, pers. comm.). Leading into the 2020 season, a new pair attempted to occupy the site, each with auxiliary bands that are colored black over blue (Jerry Toll, pers. comm.); the female’s alphanumeric code indicated she was banded 26 May 2016 at the Kansas City Power and Lite IATAN generating station smokestack and named Sierra (Jerry Toll, pers. comm.). Clark arrived soon after, however, and took over the box from Sierra 21 Feb and paired with Cheveyo, another Kansas City bird, but he was soon deposed on 2 Mar by another male whose bands show he is the 2012 nest mate of Clark appropriately named Lewis. Lewis and Clark have settled down, copulated twice, and as of 21 Mar appear ready to settle in (Jerry Toll, pers. comm.). Three eggs were laid around 30 Mar 2020, and the first of three chicks hatched 3 May. Four young were fledged. In 2021, Lewis and Clark had four chicks that were banded in late May (Jerry Toll, pers. comm.). Eggs hatched 11 May 2022.

As Midwest Peregrine Falcon populations increased due to hacking efforts, birds eventually colonized the Nebraska State Capitol in Lincoln. A banded male that had been released in Omaha in 1989 frequented the area in the summer of 1990; pairs were present most years through 2002, and in 2003 a pair of young birds began nesting in Apr. The female, only a yearling, fledged in Minneapolis in 2002 and the male, 19/K, in Des Moines in 2001. Two eggs were present 21 May, but they did not hatch. In 2005, a pair which included the same male, 19/K, and a female, Ally, hatched in Winnipeg, Manitoba in 2004, successfully fledged one bird. From 2005-2018, this same pair has nested each year and has fledged 26 young during this period despite varying success, with age possibly being a factor in their unsuccessful nestings in 2015, 2017, 2018, 2019, and 2020 (NGPC, unpublished data). Neither adult returned in 2021, the male 19K probably dying and the female Ally was found with a broken leg near Valparaiso, Lancaster Co and rehabilitated but will not be released.

Away from Omaha and Lincoln, two birds were apparently defending a cell tower in Norfolk, Madison Co against a Turkey Vulture 29 Apr 2016 and were still present there and at a similar nearby tower 11 May. No additional observations have been made to suggest nesting is occurring at this site (Scott Buss, pers. comm.).

A nest box in Topeka, Kansas was occupied in spring 2011 by a pair of Nebraska State Capitol products, the first recorded away from Lincoln. The pair included Boreas, a male fledged in 2007, and Nemaha, a female fledged in 2009.

Early and late dates above do not include reports from Douglas and Sarpy Cos since 1992 and Lancaster Co since 2003, when breeding birds became established and are resident. Earlier dates away from counties where the species is resident may be of wintering birds, although some are likely misidentifications of Prairie Falcon (see Winter).

Summer: Until introduction efforts in Omaha and Lincoln established breeding pairs in 1992 and 2003 respectively, there was only a single report indicative of nesting; Bruner et al (1904) noted that young and old birds were seen 5-19 Aug 1903 around cliffs 8 miles west of Fort Robinson SHP in Sioux Co in and out of a “recess that may have been the nesting site.” However, Mollhoff (2022) did not rule out the possibility these birds may have been migrants based on the date and that young peregrines leave the nest in Jun.

Early and late dates above do not include reports from Douglas and Sarpy Cos since 1992 and Lancaster Co since 2003, when breeding birds became established and are resident.

An adult at Crescent Lake NWR, Garden Co 16 Jun 2022 was at the same general location and using the same perches as a juvenile 10 Aug 2019 and an adult 5 Aug 2021 (Steve Mlodinow, pers. comm.). These sightings may be of the same individual, 3 years old in 2022) dispersing from the Rocky Mountains breeding population (subspecies anatum). Most Peregrine Falcons do not breed until 3-4 years of age.

The winter foraging range of the species is unknown, although Palmer (1988) stated that resident birds loosely defend a hunting range that may consist of up to 40 square miles. A circular territory this size implies a foraging radius of 3-4 miles or a maximum distance of 6-8 miles from a nest site.

A banding and trapping study by Beingolea and Arcilla (2020) showed that nearctic Peregrine Falcons, both tundrius and anatum, winter together in Peru; one of the birds recovered in Peru was named Sky King, hatched at the WoodmenLife Tower in Omaha, banded there as a chick 26 Jul 1989, and recovered at Ica, Peru 1 Feb 1995. Sky King nested successfully at the WoodmenLife Tower 1994 and 1995, paired with Kay Cee and fledging one young bird each year.

Comments: This species underwent a severe population decline in North America due to pesticides beginning in the 1940s. By 1964 the population was much reduced, but after restrictions on the pesticide DDT in 1972 the population has recovered (White et al 2020). Reintroduction efforts have also assisted in increasing the population, particularly in mid-latitudes; most Nebraska reports are since 1980. 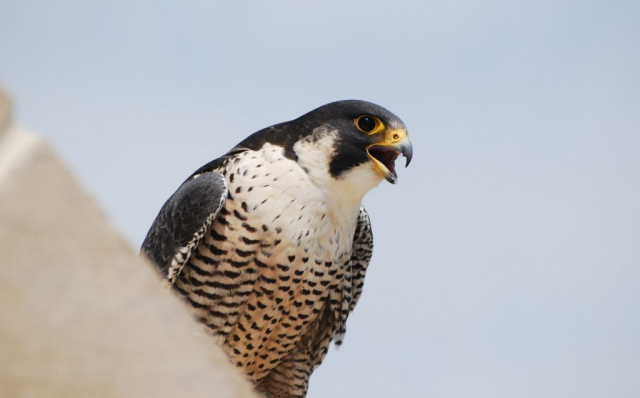