Taxonomy: No subspecies are recognized by Clements et al (2017) or Gill and Donsker (2017), although Pyle (1997) accepted three weakly-differentiated subspecies: cassini from Oregon to Idaho and south to Nevada and New Mexico, rostratus, of southeast California, and cyanocephalus from Montana to North Dakota, south to northern Colorado, including the South Dakota Black Hills.

Phillips (1986) indicated that birds reaching northern and northwestern Nebraska after breeding were of the eastern Rocky Mountain subspecies cyanocephalus, which breeds in the South Dakota Black Hills and the Rocky Mountains to the west of Nebraska.

Resident: Important in understanding movements of this species is its propensity to form permanent flocks that consist primarily of related individuals (Balda and Bateman 1972; Johnson and Balda 2020). According to Balda, fledglings tend to stay with the natal flock for their lifetimes. During the breeding season, breeders separate from the main flock and form a nesting colony nearby. After young are fledged the breeding group re-joins the main group, which then becomes nomadic until the next breeding season, when it returns to the breeding site used in previous years (Johnson and Balda 2020).

Wayne Mollhoff (pers. comm.) described the nesting behavior in Nebraska of a Bighorn Escarpment flock: “The Pinyon Jay flocks/colonies each maintain a discrete territory. Somewhere in each territory they have a nesting territory. The Redington flock nested each year in a side canyon about 300 meters wide and 1000 meters long. It took me 3 years of searching their territory to find where they nested. They pick a new site, maybe 20 x 40 meters, to place their nests each year. Each year the flock builds their nests in a cluster and never uses them again. The next year they moved to another site within the canyon and did the same. And again. So it was the same flock/colony involved. The landowner I worked with told me the approximate flock territory (which as I recall covered a good part of a township), and then told me how far it was to the next flock’s territory (10-15 miles). When I asked how he knew that, he told me that he trapped coyotes all over that area for about 30 years.”

The breeding status of this species in Nebraska was discussed by Mollhoff (2000), who suggested that the range may have contracted in modern times. During the first BBA the species was found in 10 survey blocks, but during the second BBA period Pinyon Jays were found in only 6 of those blocks, despite a 30% increase in effort (Mollhoff 2016). Pinyon Jay is a species of significant conservation concern that has declined by as much as 84% since the 1970s (Rosenburg et al 2016). BBS trend analysis shows notable annual declines ranging from 3-6% for Colorado, Wyoming and South Dakota (Sauer et al. 2017); trend analyses are not available for Nebraska due to small sample sizes. Pinyon Jay would seem vulnerable to extirpation in Nebraska given range wide and regional declines in numbers and since Nebraska’s populations are small and disjunct. In addition, it has been pointed out by Mollhoff (personal communication) that Nebraska residents survive on an atypical diet for the species, ponderosa pine seeds, which are much smaller than the species’ typical diet of pinyon nuts; this difference may alter the reproductive biology and movements of the species in Nebraska.

The only recent breeding season reports are from the Pine Ridge and the Bighorn Escarpment in Morrill Co; breeding has not been detected since 1989 in the Wildcat Hills.

Breeding had never been confirmed in Nebraska until Mollhoff (2001a) reported adults feeding young 22 May in Scotts Bluff Co and 29 Apr-9 Jun in Sioux Co in the period 1984-89. A nest with eggs and newly hatched young was located 11 Jun 1999 in ponderosa pine woodland in East Monroe Canyon, Sioux Co; the young were well grown on 25 Jun and absent on 13 Aug (Mollhoff 2000, 2001b). A nest with eggs was near Redington, Morrill Co 1 Jun 2001 (Mollhoff 2001b), and in 2006 Mollhoff found four nests with eggs near Redington 17 Apr (Mollhoff 2006). In 2010, 2-3 were located along Corkscrew Road in Sioux Co 16 May in an area they occupied in 2008; these birds were building a nest, which may have been a second attempt at that date. A family group in Smiley Canyon, Sioux Co 14 Jun 2003, another group of 12 there 4-7 Jun 2020, and 12 there 26 Jun 2021 may not have nested in the immediate area. Mollhoff (pers. comm.) mentioned a pair building a nest on the upper White River near Glen, Sioux Co but was unable to check it later, and in West Ash Canyon, Dawes Co adults with fledged young were found but searches did not locate nests. A single was at West Ash Creek, Dawes Co 4 Jul 2021.

Rosche (1994) noted that the species “reaches eastern limits” in the Bighorn Escarpment, presumably the area near Redington mentioned by Mollhoff (1999). This site has a consistent history of breeding season sightings. About 10 birds were there Apr and May 1987 (Williams 1987) and flocks of 5-75 birds, including fledged young, were seen with young of the year 16 May 1998 (Mollhoff 1999). Mollhoff (1999) also found two nests that he believed were unlikely to be of Pinyon Jay, noting that that particular flock’s nesting site was still unknown. Nine empty nests located seven miles southwest of Redington, Morrill Co 14 Apr 2001 were thought to be the remains of a nesting colony there in 1999 or 2000, but the active 2001 colony with 10 nests under construction was found in the same general area 29 Apr (Mollhoff 2004); this same site was occupied by four nests with 4-5 eggs each 17 Apr 2006 (Mollhoff 2006). A feeder regularly used by this species in the Bighorn Escarpment in Morrill Co hosted some 20 birds during the summer of 2014, perhaps representatives of the local breeding flock.

Reports are fewer in summer than at other seasons (Rosche 1982). Around 1900 it was thought to have bred on the Pine Ridge east into Sheridan Co almost to the South Dakota border (Bates 1900, Bruner et al 1904), but the only nesting season report from Sheridan Co since then is a listing as “Permanent Resident” in 1992 without details.

Winter: This species is highly gregarious most of the year, and flocks may cover considerable distances in search of food outside of the breeding season (Bent 1946). Large numbers are sometimes seen at feeders in towns, such as the “invasion” in Chadron, Dawes Co in Sep 1985 (Williams 1986), and in Scotts Bluff Co, where 350 were counted on the 18 Dec 1971 Scottsbluff CBC. High CBC counts of 170 were also made at Crawford in 1977 and 1978. Rosche (1982) stated that numbers are higher in fall, winter, and spring than in summer, and suggested that local populations may be augmented by birds from “presumably further west” (see also Phillips 1986), although there are no banding data to support this. A remarkable report with a photo of at least 84 Pinyon Jays was taken 17 Feb 2014 in a yard northwest of Dalton in Morrill Co; 80 were there 1 Nov 2014. The same yard hosted at least 28 from 21 Sep 2020 through 13 Jan 2021.

Pinyon Jays occur irregularly east of the breeding range, mostly in the Platte River Valley, but rarely east of Lincoln Co, where Tout (1947) considered it an irregular winter visitor 16 Sep-5 May, and Logan Co, where Glandon and Glandon (1934) noted that “a small flock appeared almost every winter.” A small flock of five was seen in southeast Lincoln Co 30 Oct 2016. A group of 11 which appeared at Wind Springs Ranch in southern Sioux Co 28 Jul 2006 may have dispersed from the Pine Ridge or elsewhere in response to extensive fires there. A “small flock of seven or eight” was near Hastings, Adams Co 16 Oct 1934 (Swenk 1935), it was reported near Kenesaw, Adams Co fall 1937 (Brooking 1938), and 8-10 were near Osceola, Polk Co Nov 1930 (Jorgensen 2012). Such reports in recent years are few, but a localized irruption was noted in the Ogallala area, Keith Co 2002-2003, when one was five miles northeast of Lake McConaughy at a feeder in early Dec 2002, a group of five were in an Ogallala neighborhood from about 1 Dec 2002 through at least 16 May 2003, and one was photographed in Chase Co 3 Dec 2002 (Brogie 2003). A group of seven was in Ogallala 6 Nov 2012, the first there “for several years”.

Comments: Based on serious declines in populations in certain parts of the Pinyon Jay range, likely due in part to loss and degradation of its obligate piñon-juniper habitat, a petition to list the species under the Endangered Species Act was filed in 2022 (Defenders of Wildlife 2022). As pointed out by Mollhoff (see Summer, above), Pinyon Jays in Nebraska utilize an atypical habitat and diet for the species, Ponderosa Pine seeds. It is unknown whether this difference has an effect on population sustainability in Nebraska. 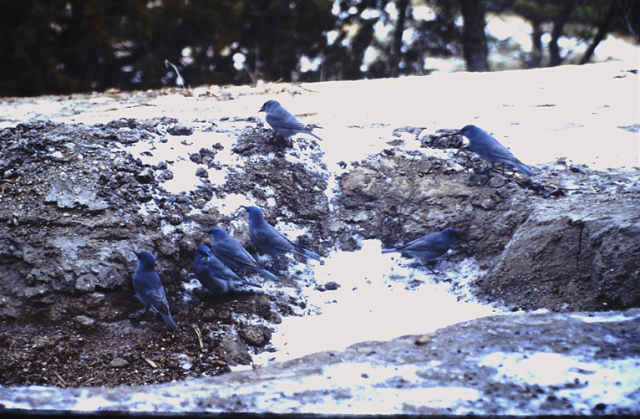