Migrants are first seen in mid- Apr, peaking in numbers during the latter half of Apr and early May. There is an earlier date, 6 Apr 2016 at Conestoga Lake, Lancaster Co. Single birds in Jun are likely one-year-old non-breeders.

Summer: Regular nesting in Nebraska is restricted to the Missouri, Platte, Elkhorn, Lower Loup, and Lower Niobrara River systems. Suitable habitat, consisting of expanses of sparsely or un-vegetated sand adjacent to water, including sandbars, beaches, and off-river sites such as sand and gravel mines, dredging operations, and lakeshore housing developments (Brown et al 2011) is determined by water levels in rivers, lakes, or reservoirs. Variable numbers of birds occurring in response to fluctuating amounts of available habitat, as well as exchange (i.e., emigration- immigration) between nesting areas, makes it difficult to determine whether breeding numbers are increasing or decreasing in Nebraska. Piping Plovers are monitored annually or nearly so by an array of entities because of their protected status. Beginning in 1991, and at five-year intervals since, a statewide survey has been conducted under the auspices of the International Piping Plover Census (IPPC; Haig and Plissner 1992). Nebraska totals included in the IPPC, not including the Missouri River, which is included with the South Dakota portion of the IPPC, were 398 in 1991 (Haig and Plissner 1992), 366 in 1996 (Plissner and Haig 1997), 308 in 2001 (Ferland and Haig 2002), 718 in 2006 (Elliott-Smith and Haig 2009), 348 in 2011 (Elliott-Smith et al 2015), and 343 in 2016 (Jorgensen 2016).

In the Missouri River Valley, nesting occurs from Gavin’s Point Dam downstream to near Ponca SP, Dixon Co. South of Dixon Co the river has been channelized, and suitable nesting habitat is generally absent. Nesting also occurs on artificially-constructed islands in the upper portion of Lewis and Clark Lake and upstream of the “delta” in Lewis and Clark Lake to the South Dakota border. Adult Piping Plover numbers generally decline markedly during years of high flow on the Missouri River, but numbers and population growth rate increase in years immediately following those high flow events, which scour, replenish, and create midstream river sandbar nesting habitat (Hunt et al 2017). Low counts occurred in two years of high flows, 1997 (82 adults) and 2011 (182 adults), and the high count occurred in 2005 (1764 adults), when flow was fourth-lowest on record. In years of high flow, when habitat is scarce or absent, birds may not nest or may disperse to other areas. Banding data show regular exchange between plovers from the Gavin’s Point Reach of the Missouri River and the lower Platte River and its tributaries in Nebraska (Hunt et al 2013, Catlin et al 2016). One plover, banded as a chick on 1 Jul 2012 on a sandbar in the Missouri River near Gavin’s Point Dam, was photographed in migration at Branched Oak Lake, Lancaster Co on 16 Apr 2017; it had passed the intervening winters on the Florida Gulf Coast.

In the Platte River Valley, breeding extends west to Lake McConaughy, Keith Co, where plovers were first observed in 1978 (Rosche 1994). Since the initial discovery, the species’ occurrence and abundance at Lake McConaughy has varied but generally mirrors lake water levels. In 1993, when the lake level was at a record low, 138 birds (69 pairs) were counted there (Peyton 2004). A period of low water levels beginning in 2000 saw even larger numbers, peaking in 2004 as the lake approached record low water levels, when 330+ individuals and 183 nests were counted (Peyton 2004). Although there was habitat reduction resulting from rising water levels, 2007 had the 2nd highest tally of nests with 245 (Peyton and Wilson 2007). Only 38 adult plovers were recorded during the 2011 IPPC, compared to the 358 counted in the 2006 IPPC. In 2013, lake water levels began to increase and a total of only 86 nests were monitored during the 2013 season (Zorn and Wilson 2016). In 2016, only 10 adults and nine nests were found when the lake was near full pool (Zorn and Wilson 2016). Also, in 2016, 18 Piping Plovers and 12 nests were found on sandbars in the South Platte River created by flooding in previous years (Zorn and Wilson 2016).

In the Platte River valley between the North Platte–South Platte River confluence and the Loup–Platte River confluence, including the central Platte River region between Chapman and Lexington, nesting has occurred on both off-river sites and river sandbars (Dinan 1986, Ziewitz et al 1992). The Platte River has been altered by water development beginning in the late 1800s and those impacts are most pronounced upstream of the Loup confluence. The alterations have resulted in reduced flows which have led to narrower channels and woody vegetation encroachment (Williams 1994, Johnson 1994, NRC 2005). These changes likely reduced the habitat quality of riverine habitats used by Piping Plovers. However, the role of riverine and off-river habitats in supporting Piping Plover nesting in the Central Platte River Valley is controversial (see Farnsworth et al 2017 and response, Alexander et al 2018). Water projects, especially those proposed since the 1980s since Piping Plover (and Interior Least Tern) were federally listed under the Endangered Species Act, have generally required habitat mitigation for the listed species. Mitigation has included mechanical creation and management of nesting habitat on both off-river and riverine sites. However, riverine sites have generally been unsuccessful while off-river habitats have generally been successful when intensively managed (NPPD 1994, Czaplewski et al 2005). Since the early 1980s, proportionally fewer nests were observed on river sandbars. Since 2007, the Platte River Recovery Implementation Program (PRRIP) has intensively managed habitat in the region from Lexington to Chapman, mostly at off-river sites. In 2014, a maximum number of 69 Piping Plovers was recorded along the Central Platte River Valley (Cahis and Baasch 2015). However, few nests (<10) have been detected at in-channel habitats (i.e., sandbars) in the Central Platte River in recent years (Cahis and Baasch 2015).

Nesting in the Loup River drainage extends west to Valley and Howard Cos (Sidle et al 1991), but only small numbers (< 20 pairs) nest on the river and at off-river sites. A nest with eggs was found on the Middle Loup River in Blaine Co 28 May 1987 (Mollhoff 2001) and a pair was incubating near Milburn Dam, Blaine Co, 27 May 2010, apparently at the same site as the 1987 record.

Away from these major sites, nesting records are few. The only site used somewhat regularly is at Goose Lake, Crescent Lake NWR, Garden Co. A sand island was renovated in Goose Lake around 2006 and on 8-9 Jun 2007 hosted six adults with three nests; 2-3 eggs and 2-3 one-day-old young were seen there 22 Jun (Mollhoff 2008). One or two pairs were present 2008-2009 (Mollhoff 2008). High water levels in 2010 eliminated nesting habitat on the island and birds nested on a nearby gravel road, which they continued to do for several years; in 2011 a nest was found on the gravel road near Rush Lake, about a mile northwest of Goose Lake (Dan Leger, pers. comm.). Nesting has not been recorded in recent years and this site now appears abandoned. There apparently was a breeding population in the Sandhills at least until 1917. Nesting was noted at Trout Lake, Cherry Co in 1900 and 1902 by Hunter, Wolcott, and Wallace (Moser 1942). There is a nesting record from Clear Lake, Cherry Co, now within Valentine NWR, on 17 Jun 1902 when four adults (UNSM ZM6108-11) and two chicks (UNSM ZM6112-13) were collected. Swenk (Notes After 1925) noted there was a pair of adults and four eggs collected 23 Jun 1917 at Crescent Lake in the Black Collection at Kearney State College.

Nesting has occurred in the southwest and in the Panhandle, but none of the sites appear to have persisted, mainly due to fluctuating water levels. A pair with a nest at Lake Minatare, Scotts Bluff Co on 19 Jun 2004 is the first known Panhandle breeding record; this reservoir was at very low water levels in 2004 due to drought. In 2005 a displaying male was at Lake Minatare on 17 May (Mollhoff 2005) and four birds were present 19 May. A nest was found 20 May, but due to rising water it was unsuccessful; the pair re-nested but was again unsuccessful. Single birds appeared at the site 30 Apr 2006 and again 28 Apr 2007. A displaying male was seen at Oliver Reservoir, Kimball Co 10 Jun 2007, and a pair was courting and digging nest scrapes at Swanson Reservoir, Hitchcock Co 13 May 1999. Nesting was documented on a strip of sandy beach that was produced by a dredging operation at Capitol Beach Lake, Lancaster Co in May and June 1922 (Pickwell 1925).

Piping Plovers are known to migrate early in fall. Among 474 wintering ground observations of color-banded birds from Nebraska, the earliest known arrival date was 23 Jun (Lauren Dinan, NGPC, personal communication). Away from nesting areas, migrants are rare, and usually first noted in mid-Jul, departing Nebraska by mid-Sep. At Lake McConaughy in 2001, 62 birds were present on 21 Jul, but only 13 remained by 20 Aug. Jorgensen (2012) noted that there are no fall records for the eastern Rainwater Basin. One-year old non-breeding birds may undertake leisurely northward migrations during the summer; one color-banded as a chick near Gavin’s Point Dam in 2005 was seen near Valley, Douglas Co on 13 Jul 2006 but then later near its hatching site 23 and 25 Jul 2006.

A bird banded in Jun as a chick on an alkali lake in North Dakota (fide Megan Ring) was photographed at Tamora WPA, Seward Co 31 Jul-2 Aug 2017.

Comments: Zeigler et al (2017) undertook a study of Piping Plover metapopulation dynamics as affected by high-river flow events and projected effects of climate change using the Gavin’s Point Dam, lower Platte River, and Lewis and Clark Lake populations. While noting that the metapopulation has been “substantially reduced under the current suppressed disturbance regime (high-flow interval ~20 yr)”, Zeigler et al (2017) concluded that a high-flow return every four years would “maximize metapopulation abundance”. Zeigler et al (2017) stated that “The presence of even a small, stable source sub-population” such as those involved in this study, “even if unintentionally maintained through anthropogenic activities”, helped buffer the metapopulation from extinction risk. A study by Jorgensen et al (2021) however, indicated nesting numbers along the lower Platte River population are expected to be negatively affected because of a decline in habitat as a result of changing mining practices. Zeigler et al (2017) concluded that projected climate change “could have positive effects in ecosystems where disturbances have been anthropogenically suppressed” as increased disturbance regimes move “toward more historic patterns”. A study by Catlin et al (2016) investigated Piping Plover responses to artificial habitat creation (“Emergent Sandbar Habitat”) on the Missouri River in the Gavin’s Point Reach and near Niobrara, Knox Co, on Lewis and Clark Lake. These authors concluded that efforts to increase plover population numbers by nest exclosure and predator control efforts would be successful only if additional habitat was created that provided nesting habitat for the increased numbers of birds. 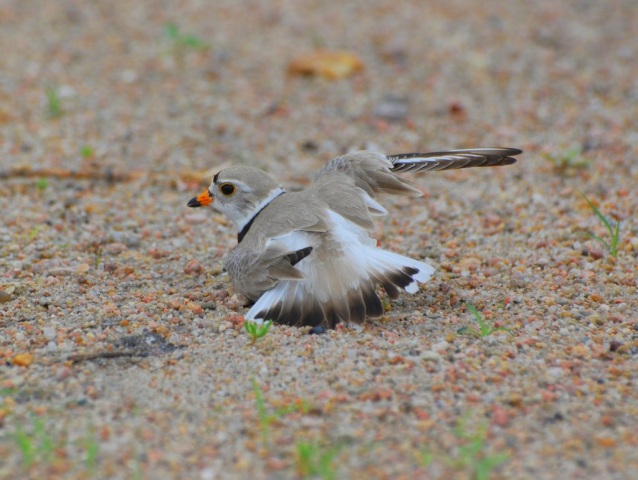 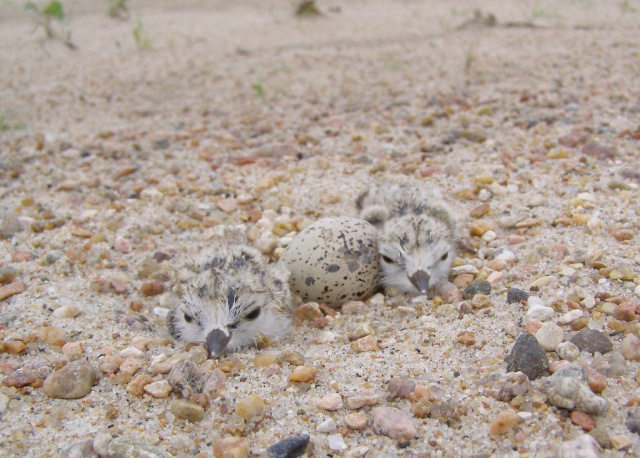 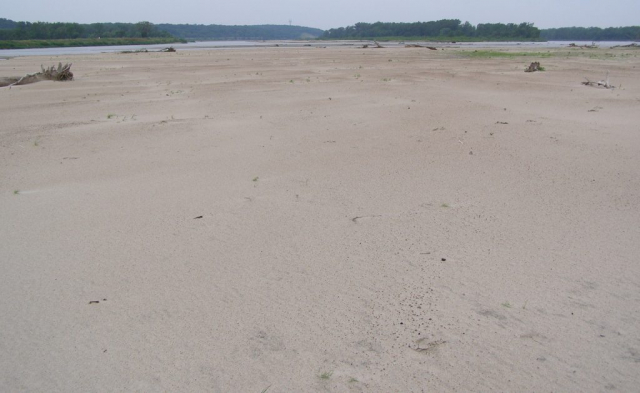 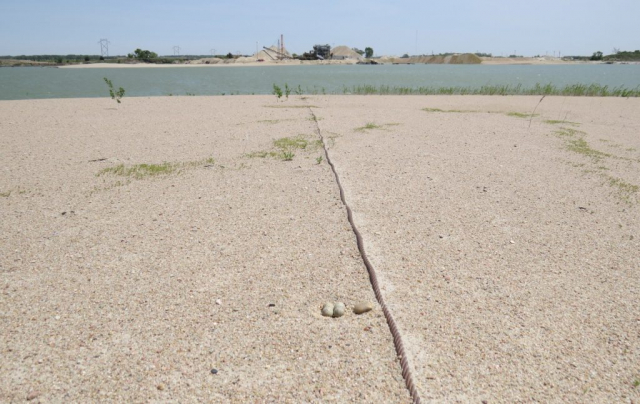 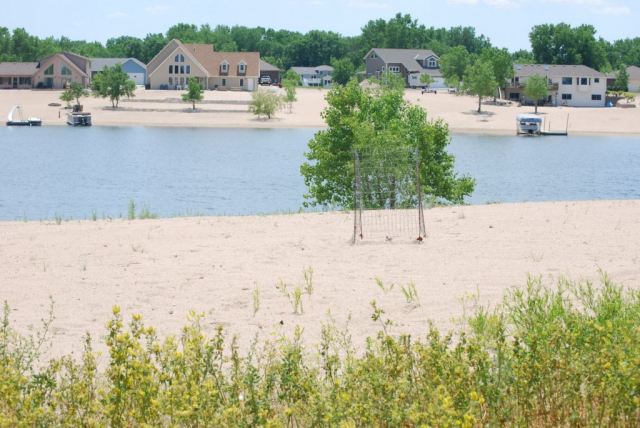 Mary Bomberger Brown and Lauren R. Dinan reviewed an earlier draft of this species account and provided numerous helpful comments that improved the content and composition.

Adolf, S.L., K. Higgins, C. Kruse, and G. Pavelka. 2001. Distribution and productivity of Least Terns and Piping plovers on the Niobrara River. Proceedings of the South Dakota Academy of Science 80: 231-245.

NPPD. 1994. Islands and Sandpits. An alternative solution for Least Tern and Piping Plover habitat in the Central Platte Valley. Brochure.

Williams, G. P. 1978. The case of the shrinking channels: the North Platte and Platte Rivers in Nebraska (Vol. 781). Department of the Interior, Geological Survey.