The former “Solitary” Vireo was split into three species by Banks et al (1997) based on studies by Murray et al (1994) and Johnson (1995). All three “new” species occur in Nebraska: Blue-headed Vireo V. solitarius, Cassin’s Vireo V. cassinii, and this species.

Migrants are uncommon (Rosche 1982), but have been reported throughout the Panhandle, with one easterly exception: one was well-studied at Brule, Keith Co 28 May 1956 (Huntley 1957).

Summer: Low numbers breed on the Pine Ridge, which has a disjunct population as in the Black Hills of South Dakota (Tallman et al 2002). In the 1980s, most breeding birds occurred from Sowbelly Canyon, Sioux Co westward (Rosche 1982), but in recent years the breeding range has expanded (or been discerned) eastward to Chadron SP, Dawes Co, where two were seen 3 Jun 2005 and two on 8 Jul 2007.

Breeding is not known in the Wildcat Hills, Scotts Bluff and Banner Cos, although reports in 2017-2021 suggest that there may be an establishing or previously overlooked population there. A territorial pair was found in the eastern part of Wildcat Hills SRA in Scotts Bluff Co 4 Jul 2017, and in 2018 one was in the same place 12 Jun. Also, in 2018, along Hubbard’s Gap Road in Banner Co 3 were found 24 Jun and one on 30 Jul; singles were at the Croft residence on the north edge of the Wildcat Hills SRA 30 Jul 2018 and 17 Jul 2019 and in the Wildcat Hills 21 Jul 2012. In 2020 eight were in Carter Canyon 16 Jun, and up to four were elsewhere in the Wildcat Hills 5 Jun-24 Jul. Up to four singing males were present 14-20 Jun 2021.  It is possible that late Jul reports are of early fall migrants or dispersers.

Migrants are essentially restricted to the Panhandle. There are four records away from the Panhandle; the only record for the east was documented at Wood Duck Area, Stanton Co 21 Sep 1997 (Brogie 1998), and elsewhere in the central singles were in Dundy Co 30 Aug and 7 Sep 2020 and one was at Whitman, Grant Co 1 Sep 2002.

A very late report, 30 Oct 1977 Garden Co, may be of any of the three recently split species, but most likely Blue-headed, which tends to be a later migrant than Plumbeous or Cassin’s Vireos; Blue-headed is an Oct migrant as far west as the eastern Colorado plains (Andrews and Righter 1992). Andrews et al (2002) noted that Plumbeous Vireo is less numerous in fall migration at Barr Lake, Colorado, than is Cassin’s Vireo; some Sep reports of Plumbeous prior to 1997 were probably of Cassin’s Vireo.

Comments: A Plumbeous Vireo with another presumptive vireo near Wildcat Hills NC 2 Jul 2015, where this species is not known to breed, was a notable observation. The identity of the second bird was not determined, but it had a “yellowish wash on the sides near the tail” and was thought by the observer to be a Cassin’s Vireo although its face pattern was not seen. Juvenile Plumbeous Vireos do not show yellowish flanks, but fresh fall adults sometimes do. Perhaps these were a pair of failed breeding adult Plumbeous Vireos that had moved south from the Pine Ridge, one having initiated molt, or one was an extremely early fall migrant Cassin’s Vireo. 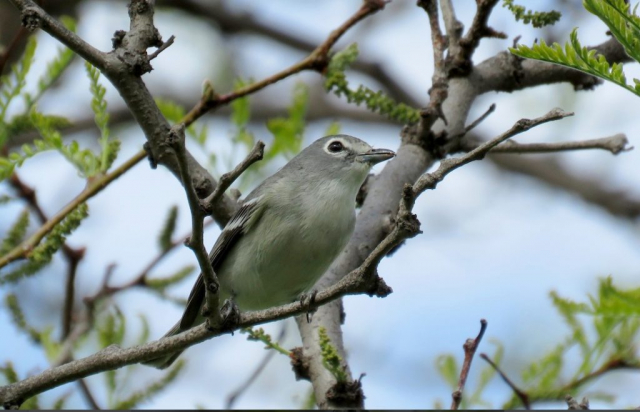