Departure is by early May. Mid-May reports are few, and so surprising were the four mid-May reports in 2016: 14 May Lancaster Co, 14 May Papillion, Sarpy Co, five on 14 May Walnut Creek Lake, Sarpy Co, and two westerly 18 May at North Platte, Lincoln Co. Similarly, in 2017 there were three such reports: one at Ponca SP, Dixon Co 21 May, four in Buffalo Co 17 May, and one in Dodge Co 15 May. A pair persisted until “mid-May” in Dodge Co in 2008.

A report suggesting that an immature banded 20 Apr in Sarpy Co had hatched in Nebraska was questioned (Mollhoff 1989); we too believe the bander’s conclusion was unwarranted.

Purple Finches occur statewide during migration but are most common in the east. Arrival is in mid-Oct, and migration probably peaks in late Oct (Johnsgard 1980).

Winter: Early authors considered Purple Finch to occur only in eastern Nebraska (Rapp et al 1958; Bruner et al 1904). More recently, Rosche (1982) described it as “uncommon to fairly common” in the northwest, although “erratic and irregular.” CBC data show fairly even distribution across the state, with somewhat higher numbers in the southeast (Root 1988).

The winter of 2007-2008 saw a major irruption in Nebraska, with some 520 birds reported, included significant numbers in the Panhandle: 33 were in Monroe Canyon, Sioux Co 28 Dec.

In eastern North America, migration is characterized by biennial eruptions into the southern USA (Wootton 2020); Nebraska CBC data do not clearly show this to be the case, possibly as Nebraska is near the western limit of the wintering range.

It has been suggested that increases in numbers and the range expansion of House Finch may have caused an observed decline in Nebraska Purple Finch numbers (Rosche 1994, Grzybowski 1997). However, statewide CBC data 1960-2015 show Purple Finch numbers are variable, but there is no discernible trend; the assertion that a causal relationship exists between the two species’ abundances in Nebraska is not supported by the available evidence. 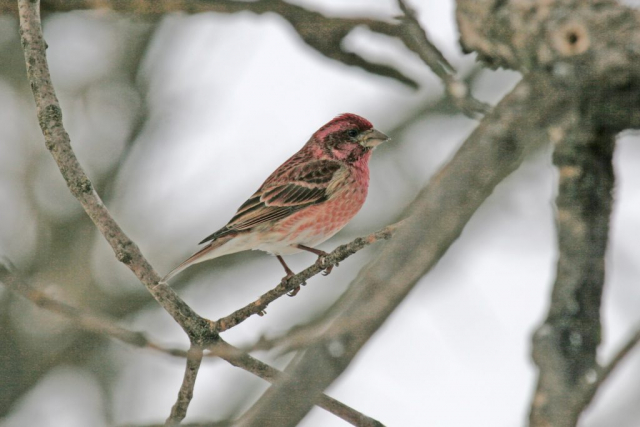