Taxonomy: No subspecies are currently recognized (Pyle 1997, Gill and Donsker 2017).

Changes Since 2000: This species has continued to expand its range westward in riparian woodlands and pioneering birds are routinely found west of the mapped range. It now occurs regularly throughout the North Platte River Valley. It is still essentially unrecorded, however, in the western Sandhills, and reports in the Pine Ridge and along Lodgepole Creek are few. BBS trend analysis shows the species has increased at a rate of 5.12% (95% C.I.: 3.66, 6.53) during the period 1966-2015 (Sauer et al 2017).

Resident: Red-bellied Woodpecker has spread gradually westward during the 20th century, but remains by far most numerous in eastern Nebraska, where BBS data indicate 95% of all birds are reported. Ducey (1988) cited breeding records prior to 1920 only for Otoe and Cass Cos, while the breeding range outlined by Bruner et al (1904) included and was southeast of West Point, Lincoln, and Beatrice. It has long occurred in the lower Missouri Valley but was first recorded in Dakota Co in the winter of 1932-33 (Stephens 1957). Reports suggest that westward spread is accomplished by individuals dispersing westward along river valleys in winter, possibly aided by bird feeders (Miller et al 2020); such birds are regularly found outside of the current range outlined above.

There are few reports south of the North Platte River Valley in the Panhandle. The earliest was of two at Oliver Reservoir SRA, Kimball Co 20 Sep 2000, but there were no further reports until 2013, when two were northwest of Dalton, Cheyenne Co 17 Feb 2013, another was in Sidney, Cheyenne Co 20 Apr 2013, one was at Mud Springs, southern Morrill Co 21 Sep 2013, and one was in Chappell, Deuel Co 29 May 2017.

Red-bellied Woodpecker breeds throughout the South Platte and Republican River Valleys; it was first recorded in Webster Co 20 Apr 1935, was common as far west as Sutherland in 1956-57 (Short 1961), and has bred at Bonny Reservoir in Yuma Co, Colorado since the late 1960s (Andrews and Righter 1992).

In the southwest, there are several records along Frenchman Creek in Chase Co; earliest were at Imperial 29 May and 16 Nov 2003, and it has occurred there and in nearby parts of Chase Co since, including a pair excavating a nest hole 15 Jun 2005. There are two records for rural eastern Perkins Co, 20 Feb and 3 Jun 2003, and another at Grant 14 May 2017.

Red-bellied Woodpecker may be rare or locally absent in areas in eastern Nebraska away from watercourses and devoid of trees, such as portions of the Rainwater Basin (Jorgensen 2012).

CBC data indicate that in Dec, about 95% of birds recorded were in the east; this percentage matches BBS data (see Summer). Bent (1939) indicated that there may be some southward movement in winter, and recent authors noted this also (Miller et al 2020). The only Nebraska evidence for this relates to a pair that has occupied a Scotts Bluff Co yard since 2011 but is not usually seen there during winter. 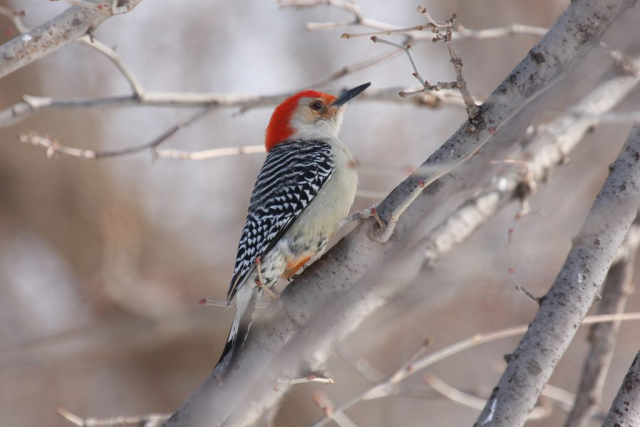 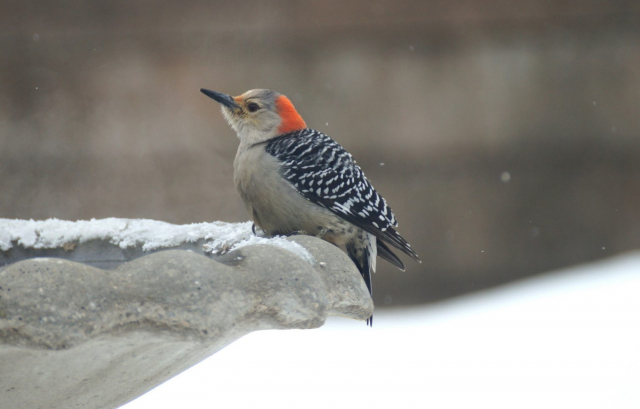