Changes Since 2000: There are numerous Jun-Jul reports in recent years south and east of the traditional breeding locations, including evidence for breeding, that support expansion of the breeding range of this species. It appears that Red-breasted Nuthatches are not averse to breeding in cities and towns with extensive conifer plantings in southeast Nebraska such as Lincoln and Omaha.

Resident: This species is generally sedentary at Nebraska’s latitudes (Ghalambor and Martin 2020), although variable proportions of birds disperse away from breeding areas during winter, sometimes in large numbers. The extent of this movement is dependent on cone crop within the breeding range (Bent 1946, Bock and Lepthien 1972), with higher rates of dispersal occurring in years with less cone seed production. Counts of 43 at NNF Bessey, Thomas Co 30 Sep 2001 and 29 in a small area in Brown Co 6 Sep 2011 probably included resident birds and dispersers.

According to Ghalambor and Martin (2020), the “southern boundary of the breeding range varies from year to year, but in recent times appears to be expanding southward and eastward”. There is accumulating evidence for some expansion south and east in Nebraska based on numerous recent Jun-Jul reports (see below), although it is unknown whether such breeders remain as residents.

Red-breasted Nuthatches breed regularly in Nebraska in four main areas, but confirmation of breeding in any of them was not obtained until 1980, that in Cherry Co (Manning 1981; below). Three of the main breeding areas of this species are vegetated by ponderosa pine: the central Niobrara Valley (Brogie and Mossman 1983) west to NNF McKelvie, Cherry Co, the Pine Ridge, and the Wildcat Hills, Scotts Bluff Co. The fourth area is NNF Bessey, Thomas Co where it has been observed year-round through 1958 and now breeds commonly in planted coniferous woodland (Bray 1994).

Short (1961) noted several individuals exhibiting territorial behavior in Dawes Co in 1955, but since then confirmation of breeding on the Pine Ridge has been elusive, although Mollhoff (2001, 2016) showed at least three confirmed breeding records. One of these was apparently a nest with eggs at Monroe Canyon, Sioux Co 31 May 1997 (Mollhoff 2022). Previously, Rosche (1982) had stated that this species was a “very rare summer visitor” which presumably bred, but there was no definite evidence, and Johnsgard (1980) believed that breeding was “probable” on the Pine Ridge and stated that “nest-building has been observed in Sowbelly Canyon, Sioux County”. A bull snake entering a nest hole of this species near Chadron, Dawes Co in May 1980 was taken as evidence of breeding (Dueker 1982). A nest with eggs was a West Ash Canyon, Dawes Co 23 May 1999 (Mollhoff 2022) and a single was there 7 Jul 2007. Adults feeding young at the Gordon Cemetery, Sheridan Co 4-5 Jun 2012 were photographed, and at least one was there 3 Jun 2013; they had bred there for “several years” prior to 2013, and one was in Gordon 3 Jun 2018. Summering birds are more frequent on the Pine Ridge after large fall or winter flights, but the species is “highly erratic” (Rosche 1982).

It has also been observed in similar habitat in the Gordon Cemetery, Sheridan Co, and on several visits since 2016 in a ponderosa pine grove near Mullen, Hooker Co, although breeding is not confirmed at the latter location. It was reported as an “occasional nester” at Smith Lake WMA, Sheridan Co during 1989-2018, although details have not been published; in 2018, 1-2 were there 15-16 Jun, and in 2021 one was seen 10 Jun.

There are several recent confirmed records in the ponderosa pine woodland of the Niobrara Valley Preserve and nearby areas in Cherry, Keya Paha, and Brown Cos. In Cherry Co, Manning (1981) found a nest in a “pine tree” and two weeks later, 2 Jun 1980, saw an adult feeding young in the nest hole and also removing a fecal sac. This nest was located at Steer Creek Campground at NNF McKelvie, adjacent to the Niobrara River Valley; a juvenile with two adults was at the location 12 Jun 2004. Mollhoff (2016) showed confirmed breeding during the second BBA at a block that apparently included this site, and one was heard there 1 Jun 2017. Short (1965) collected a paired male with enlarged gonads northwest of Ainsworth, in Keya Paha Co, in pine woodland 19 Jun 1964, and there was at least one other pair present. In 1982 Brogie and Mossman (1983) discovered adults feeding young in one Brown Co and two Keya Paha Co locations; these authors considered Red-breasted Nuthatch to be a “common breeding species in Ponderosa pine woods” in the Niobrara Valley Preserve. One was at Fort Niobrara NWR, Cherry Co 28 Jun 1999. Adults were feeding young in Keya Paha Co 19 Jun 2012.

Beginning with reports 22 Jun 1957 and 30 Jun 1969, Red-breasted Nuthatches were regularly observed in the Wildcat Hills, Scotts Bluff Co; the only evidence of breeding, however, is of one carrying nesting material in spring 1995 (Silcock 1995). There are several reports in the area since, including a count of 14 in Carter Canyon 7 May 1995 that may have been of resident birds. Two were at Scotts Bluff NM 24 May 2003, and one was at West Lawn Cemetery, Gering, 22 Jun 2003.

Especially after large winter eruptions, Red-breasted Nuthatches may breed and establish at new locations, even in the east. Additional areas that may host breeders on a regular basis are Norfolk, Madison Co, Omaha, Douglas Co, and Lincoln, Lancaster Co, although reports at these locations may be an artifact of good numbers of active observers.

An adult with a dependent fledgling was at a feeder at Nebraska Game and Parks Commission offices in Norfolk, Madison Co 19-20 Jun 2020; a pair nested there in 2021, with two carrying nesting material during the first week of May and 1-2 birds present through 15 Jun. Also, in Madison Co in 2021, a group of four with apparent juveniles was at New Lutheran Cemetery 27 Jul. One was along Norfolk Avenue, Norfolk 7 Jun 2022. An apparent third nesting in Norfolk in 2021 was suggested by David Heidt as of 22 Aug: “red-breasted nuthatches have come into the feeders for 53 straight weeks as of this weekend. Most of the time it’s a single bird, but occasionally there are two (like today) and had 3-4 at a time for three straight days in July”. In 2022, 1-2 were at a Norfolk residence through summer until at least 29 Jul (David Heidt).

A flightless juvenile in Seward, Seward Co 12 Jun 2015 also provided evidence of breeding. A female netted 18 May 1994 at Lake Ogallala, Keith Co had a brood patch and five were heard in cedars there early in Jun, but nesting is unknown in the area (Brown et al 1996). One was at Ogallala, Keith Co 15 Jul 2011.

The above dates are from areas away from breeding locations. Earlier reports in Jul are considered here to be summer visitors. Likely a tardy migrant was one at Crescent Lake NWR, Garden Co 4-8 Jun 2010. 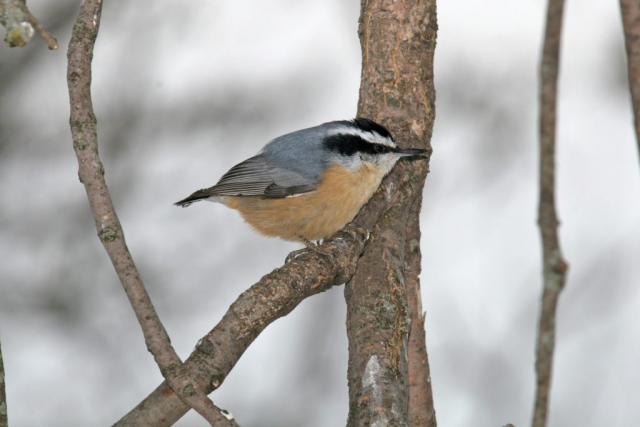 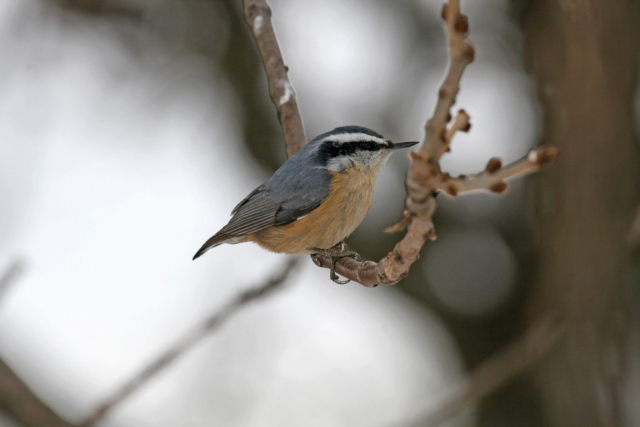