Taxonomy: There are 10 subspecies recognized, all but one in Central and South America (Gill and Donsker 2017). The North American subspecies is olivaceus, occurring in Canada and east-central and eastern USA.

Migrants arrive in late Apr, with peak numbers in mid-May.

Summer: BBS data indicate that the species breeds across the state; reports are fewest in the southwest, southern Panhandle (away from the North Platte River Valley), and Sandhills. Red-eyed Vireo prefers deciduous forest, and, while it breeds on the pine-covered Pine Ridge and Wildcat Hills (Mollhoff 2001), it is limited to riparian habitats in canyons and along river valleys (Rosche 1982). BBS trend analysis show Red-eyed Vireo abundance has increased 2.12% (95% C.I.; -0.41, 4.48) annually statewide 1966-2013.

Numbers may have increased in the southwest, as prior to 2000 there were very few reports there, including only three breeding season records south of the Platte River and west of Grand Island, Hall Co in the first BBA period 1984-1989 (Mollhoff 2001). In addition to those three records, a singing male was in Hitchcock Co 9 Jun 1990 (Grzybowski 1990), and two were in Dundy Co 22 Jun 1994. However, since 2000 eBird data show numerous post-2000 breeding season (Jun-Jul) reports for the area south of the Platte River Valley and west of Lexington, Dawson Co and 14 were at Medicine Creek Reservoir, Frontier Co, 30 Jun 2002. Furthermore, Mollhoff (2016) showed widespread reports in this region and stated it is “rapidly expanding its range along our rivers as woodlands mature”.

There are no breeding season records in Kimball, Cheyenne, or Deuel Cos in the southern Panhandle.

In the western Sandhills, there are numerous breeding season reports in the area southwest of Valentine in the Snake River drainage, Cherry Co and at NNF Bessey, Thomas Co. However, the only report in the western Sandhills away from these two areas is of one near Elsmere, southeast Cherry Co 18 Jun 2012. There are three reports from Crescent Lake NWR, Garden Co, all probably migrants: 1 Jun 2013, 3 Jun 2010, and 4 Jun 2007. There are no records for the stretch of the Niobrara River Valley between Cody, Cherry Co and Chadron, Dawes Co (eBird.org, accessed Oct 2017).

Two that appeared at Wind Springs Ranch in southern Sioux Co 28 Jul 2006 may have dispersed from the Pine Ridge in response to extensive fires there.

Peak migration is in early to mid-Sep. Departure generally occurs by late Sep, although there are several Oct reports.

Comments: A Red-eyed Vireo at Wilderness Park, Lancaster Co 12 May 2022 was recorded interspersing single Great Crested Flycatcher “wheep” notes with its usual song (Ruthie Stearns, eBird.org). This phenomenon has been reported before (Blincoe 1924, James 1976), but would be easy to overlook, thinking a Great Crested Flycatcher was calling in the vicinity. 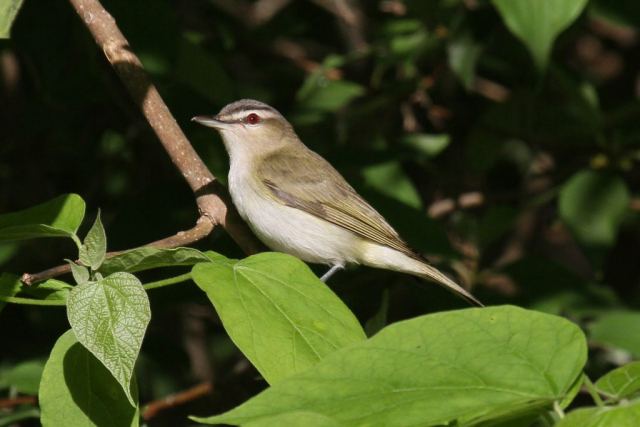