Although no subspecies are currently recognized, eastern Nebraska birds were listed as M. e. erythrocephalus and those in the central and west M. e. caurinus by Rapp et al (1958) and AOU (1957). Western birds have a slight reddish or yellowish tinge to the underparts, but the difference is minor (Pyle 1997).

Although available data show little if any difference in spring arrival dates across the state, there are fewer such dates westward. In the southeast, arrival dates are difficult to determine due to the presence of wintering birds; High counts suggest peak movement is occurs mid-May.

Summer: This species’ breeding distribution and abundance appears to have changed little since settlement. Bruner et al (1904) considered it “common throughout the whole state” and “increasing”. Nests with eggs were found in Scotts Bluff Co 28 Jun 1916 (UNSM ZM8473; Mollhoff 2022), and 26 Jun 1916 (Mickel and Dawson 1916; Mollhoff 2022). BBS data show some of the highest relative abundances throughout the species entire breeding range are achieved in Nebraska (Sauer et al 2001). However, there is a noticeable decline in density from east to west. In the west, in addition to the usual summering habitat of mostly riparian and upland deciduous forest habitats as in the east and central, there are notable influxes into recently burned ponderosa pine areas. Rosche (1982) pointed out that large numbers occurred in the Dead Horse Creek drainage near Chadron SP, Dawes Co after the 1973 fire, and 10 were found in the Pants Butte burn area in Sioux Co 27 May 2009 after the 2006 Sowbelly Canyon fire. Tallman et al (2002) cited Peterson (1993) regarding various woodpeckers’ occupation of pine forest after fires; Red-headed Woodpeckers, like the congeneric Lewis’s Woodpeckers, generally accessed burn areas several years after the burn, and were usually found only in very large burns.

Red-headed Woodpecker is a species of conservation concern and has declined markedly in portions of its range, especially the Ohio River drainage (Rosenberg et al 2016). BBS data show a small annual decline of -1.31% (95% C.I. -2.06, -0.50) in Nebraska during the years 1966-2015 (Sauer et al 2017). Jorgensen (2012) noted the species had declined in the Rainwater Basin as farmsteads and hedgerows were removed and converted to row-crops. Mollhoff (2016) also noted that the species may have declined in some areas due to expansion of row-crops.

In the northeast, there are several records of lingering birds, mostly juveniles, including juveniles in Boyd and Knox Cos 14 Nov 2011 and a single in Boone Co 30 Nov 2018. Late was one in Clay Co 9 Nov 2021. In the southeast, departure dates are difficult to determine due to the presence of wintering birds, although peak counts are in Sep. Movement in the west begins in Aug, and probably peaks in late Aug; 28 were at Lake McConaughy, Keith Co 24 Aug 2007. Most depart the south and west by late Sep.

Winter: Wintering occurs most years in the extreme southeast, with stragglers, usually immatures, north to Cedar and Dixon Cos and west to Lancaster Co, and is strongly linked to availability of acorns (Bent 1939, Parker 1982) and possibly fruits such as Russian olive, which is used by lingering individuals, usually immatures, in central Nebraska (Rosche 1994).

A study by Parker (1982) of competition among bark-foragers in Fontenelle Forest, Sarpy Co showed that as the fall progressed, Red-headed Woodpeckers devoted increasingly more time to caching acorns on firmly defended wintering territories and used this stored food reserve during the insect-free winter.

In some years, particularly those with limited availability of acorns, most Red-headed Woodpeckers leave the state; in 2015-2016 none were found at Indian Cave SP 15 Feb where usually they winter in good numbers, only two were found on the Omaha CBC 22 Dec and one on the Lincoln CBC 19 Dec, and none anywhere in the state 27 Dec-12 Feb. 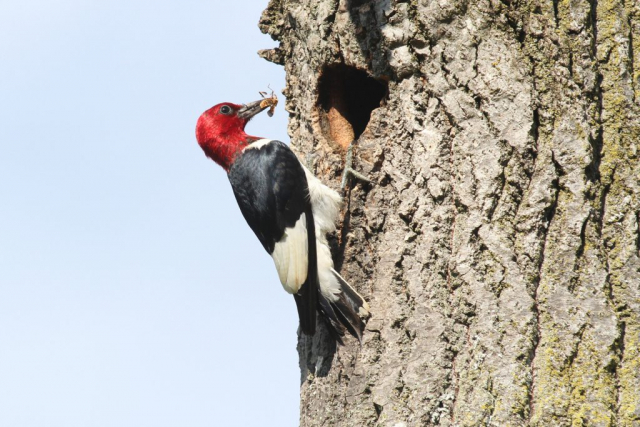 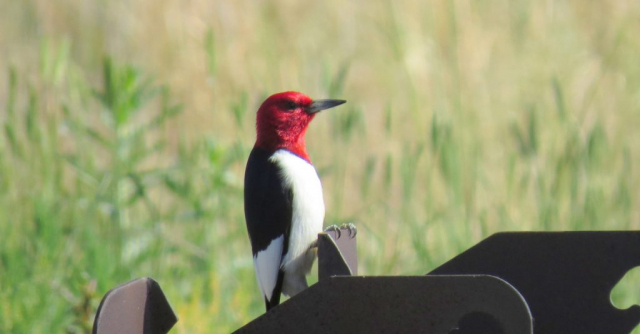 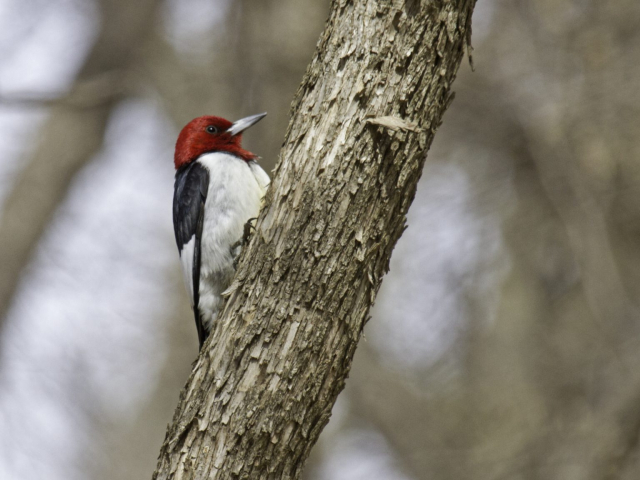