Fourteen subspecies are recognized by Clements et al (2016) and 12 by Gill and Donsker (2020). Of the 12 subspecies recognized by Gill and Donsker (2017), six occur only south of the United States. The others are: alascensis of southeast Alaska and southwest Canada, harlani of central Alaska and northwest Canada, calurus of western North America, borealis of eastern North America, fuertesi of the southwest United States and northern Mexico, and umbrinus of Florida, the Bahamas, and Cuba.

We accept four subspecies as occurring in Nebraska: borealis (including Krider’s), abieticola, calurus, and harlani. Nebraska breeding birds are borealis (Wheeler 2003), although breeding Red-tailed Hawks in the western third of Nebraska are likely to be intergrades with western calurus as well as Krider’s, which nests rarely in extreme northern and northwest Nebraska, including cliff faces (Carriker 1902, Bruner et al 1904, AOU 1957, Wheeler 2003). Calurus, abieticola, and harlani are regular migrants and winter visitors, calurus statewide, abieticola reported mostly east and central, and harlani mostly in southern and eastern Nebraska. Krider’s is a rare migrant.

Many wintering birds are dark morphs; Rosche (1994) indicated that in some years these outnumber pale morphs in the Keith Co area. A total of 93 birds in Dodge Co 30 Dec 2007 and Sarpy Co 7 Jan 2008 included five harlani, 11 dark morphs, and one rufous morph.

Occasionally white (leucistic or possibly albinistic) birds are reported, usually in migration, but one was paired with a normally plumaged bird in central Nebraska 31 Mar 2010. An apparent near albino (red eye, “touch of red” in tail) in Frontier Co 4 Dec 2016 was likely the same bird that had been wintering there for 6-8 years (T.J. Walker, personal communication).

Spring: Migration dates are difficult to discern, although numbers peak in Mar, presumably migrants (borealis) from the northern parts of the species’ breeding range. Wheeler (2003) noted that northward movement of adult borealis and calurus begins at mid-latitudes in late Feb, peaking in numbers mid- to late Mar, with juveniles straggling into Jun.

Winter: Red-tailed Hawks winter statewide but are unevenly distributed. CBC data show that they are about five times more numerous per party-hour in the east than in the west. Since 2000, the total number counted on Nebraska CBCs has varied from 262 to 550 and over the 115 years of the CBC, birds per party-hour has increased from virtually zero in the 1940s to around 1.0 in 2014.

Reports of Krider’s suggest later movement in spring than calurus or borealis; Rosche (1994) stated that in the Keith Co area “most” of the paler breeding birds arrive in Mar and depart in Oct-Nov, possibly a reference to Krider’s.

Most fall migrants are detected during Oct, with later records concentrated in the Missouri River Valley (see Winter).

Taxonomy: This proposed subspecies is considered by many recent authors a dark form of borealis (Wheeler 2003, Gill and Donsker 2020, Preston and Beane 2020), grading clinally with that subspecies in the northeast US. However Red-tailed Hawks with heavy markings occur throughout the breeding range of borealis, not only where abieticola was first described (Todd 1950, Wheeler 2003, Liguori and Sullivan 2014). If it is believed that abieticola or birds resembling it, breed across northern Canada and winter on the Great Plains, then it would be expected to occur with some regularity in Nebraska.

Recently, however, it has been suggested that abieticola has a dark morph that is indistinguishable in the field from calurus (Iron 2012). Beginning in winter 2020-2021, eBird reporters have used the eBird-suggested category calurus/abieticola, which would include the vast majority of dark Red-tailed Hawks in Nebraska that are not Harlan’s. Because of the little-known status of dark morph abieticola and its apparent rarity, we include reports of calurus/abieticola in the calurus account.

Dickerman (1989) provided the following identification points: “abieticola has broad blackish streaks on the breast, so much so as to make some individuals of the subspecies identifiable in the field. In some specimens, both adults and immatures, the black markings are so broad that they almost-form a solid black band across the breast. Adults from the western portion of the range of abieticola may have ancillary barring in the tail, while those from the eastern part of the range lack such additional barring. The tail of adult abieticola, as in borealis, is darker red than in calurus.”

Although there are records dating back only to 2018, there have been several each year since, suggesting regular occurrence at least in eastern Nebraska. As of Jun 2022, there are 62 records, only three in the Central and Panhandle: 28 Dec 2021 Harlan Co, 20 Jan 2022 Scotts Bluff Co, and 21 Feb 2020 Garden Co.

Taxonomy: No pure calurus are known to breed in Nebraska, although intergrades occur in the west (Wheeler 2003).

Reports of dark morph Red-tailed Hawks in Nebraska are reported to eBird as “calurus/abieticola” as the two subspecies are thought to be essentially identical on the winter range. Because proposed dark morph abieticola  (Iron 2012) is presumably quite rare, all reports of calurus/abieticola are included in this calurus account. Similarly, the northwestern Pacific Coast subspecies alascensis is not expected to occur in Nebraska and nearby states, and so reports of calurus/alascensis are also included in this calurus account.

Wheeler (2003) noted that northward movement of adult calurus begins at mid-latitudes in late Feb, peaking in numbers mid- to late Mar, with juveniles straggling into Jun.

Summer: In northwest Nebraska there is the possibility of intergrades or even adults occurring in summer, as well as the late-migrating immatures into Jun mentioned above (Wheeler 2003). The few reports are 9 Jun 2017 Cheyenne Co, 9 Jun 2022 two adults Scotts Bluff Co, 13 Jun 2021 Kimball Co, two, reported as “calurus” by an experienced observer, along Hawthorne Road, Dawes Co 1 Jul 2003, one in Smiley Canyon, Sioux Co 25 Jun 2018, one in Scotts Bluff Co 9 Jul 2015, and an adult 10 Jul 2022 Scotts Bluff Co.

Winter: This form winters across Nebraska, with fewer northwestward.

Taxonomy: Some authors treat harlani as a full species (Gill and Donsker 2017 but see Gill et al 2021, Clark 2018), and Preston and Beane (2020) suggest it may “prove to be given limited interbreeding with neighboring populations where ranges meet” but the case against species status was presented in detail by Sullivan et al (2018) and is followed here.

Rosche (1994) cited extreme dates for harlani in the Keith Co 26 Oct-24 Mar. There are specimens of harlani at UNSM covering the period 13 Nov-28 Mar.

Dark-colored birds are noted as early as late Sep; there is a specimen of harlani, HMM 2806, collected at Tilden, Antelope/Madison Cos 30 Sep 1918.

Winter: This form winters in highest numbers in the east and in the Platte and North Platte River valleys (Wheeler 2003, eBird, accessed December 2017). Away from these areas, there are only about 16 records. One was in Dawes Co 29 Jan 2021.

The North Platte CBC 28 Dec 2013 found a count high there of six harlani among the 33 Red-tailed Hawks reported. 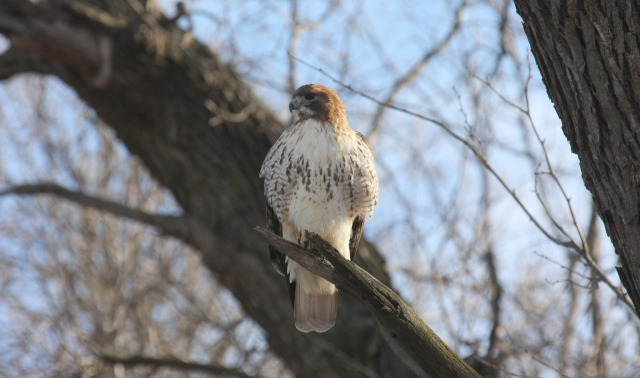 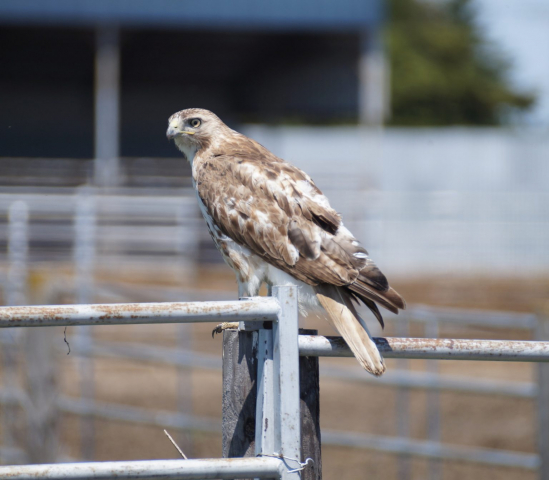 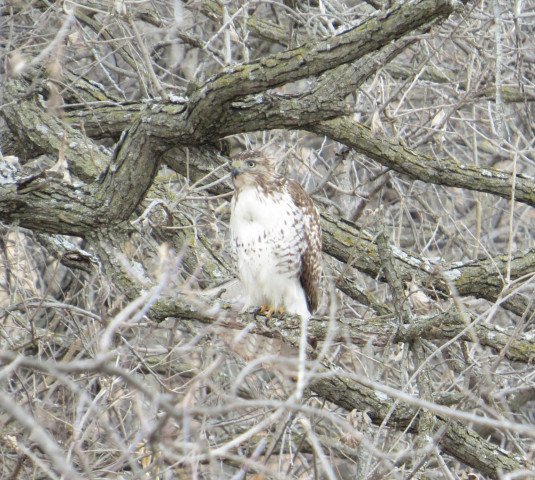 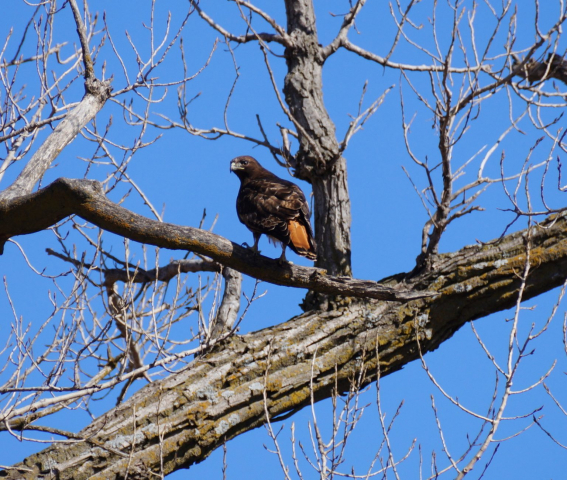