Jaramillo and Burke (1999) suggested that Red-winged Blackbird was “grossly oversplit” at the subspecies level and lumped the five subspecies suggested above as possibly occurring in Nebraska in phoeniceus; differences between them were considered clinal. Thus, phoeniceus of Jaramillo and Burke (1999) would encompass the area from Alaska, southeast of the Rockies to central Texas, east to the Atlantic Coast (except Gulf Coastal areas), and north to the tree line.

While we concur in general with Jaramillo and Burke (1999) and Power (1970) to the extent that most breeding birds in central and eastern Nebraska are intergrades, we point out here that historically two subspecies have been documented in Nebraska within the breeding season: fortis and phoeniceus. According to AOU (1957), the Plains subspecies fortis breeds in western Nebraska, northern arctolegus breeds south to southern South Dakota and possibly extreme northern Nebraska, and southeastern phoeniceus breeds in southeast Nebraska and most of Kansas. The eastward extent of the breeding range of fortis is shown in Harris (1919), and by a specimen collected in Clay Co 8 May 1918 (UNSM ZM 6972); another Clay Co specimen, collected 18 May 1920 (UNSM ZM 6992), however, was identified as phoeniceus. Harris (1919) shows the breeding range of predatorius (=phoeniceus) to be limited to southeastern Nebraska.

Most summering birds probably do not overwinter in the state; Ohio data (Bent 1968) showed that breeding birds (phoeniceus) were replaced in winter by northern birds (arctolegus).  Nebraska banding data indicate that breeding birds from North and South Dakota (presumably arctolegus) pass through eastern Nebraska during migration, while birds breeding in or migrating through the Panhandle (presumably fortis) winter a short distance to the south in Colorado or on occasion in Nebraska.  The 28 Apr specimen cited above for arctolegus (UNSM ZM6999) was probably a late migrant; the only other UNSM specimen of arctolegus, collected in Lancaster Co 10 Oct 1889 (UNSM ZM6998), was more definitely a migrant. Banding data also indicate that some Nebraska migrants come from states to the northwest, including Wyoming and Montana.  These birds are probably fortis, although stereus and zasterius may also occur in the Panhandle.

The type specimen of fortis was collected at Omaha, Douglas Co (Bruner et al 1904); this form is a regular migrant as far east as western Iowa (DuMont 1934).

Summer: This species is ubiquitous, perhaps with lowest densities in the Panhandle, as indicated by BBS data, although Mollhoff (2016) depicted even distribution statewide.  Largest numbers nest at the margins of permanent marshes statewide, usually over shallower water than Yellow-headed Blackbird where the two occur together.  However large numbers also have adapted to upland habitats, notably irrigated alfalfa fields in the west.  BBS trend analysis shows an annual change of 0.25 (95% C.I.; -0.83, 0.31) statewide 1966-2015 (Sauer et al 2017), indicating numbers have remained relatively stable during the period.

Fall: Flocks form in Jul, composed of young birds and females, and these flocks are joined later by males. A flock of 50 females was near Lincoln, Lancaster Co 3 Nov, suggesting that it may be rather late in fall before mixed-gender flocks form. “Several thousand” were in Buffalo Co 19 Jul 1997 and 4000 at Funk WPA, Phelps Co 8 Aug 1998. 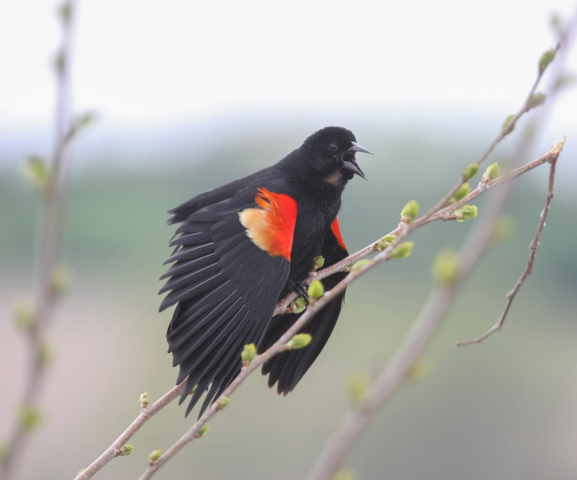 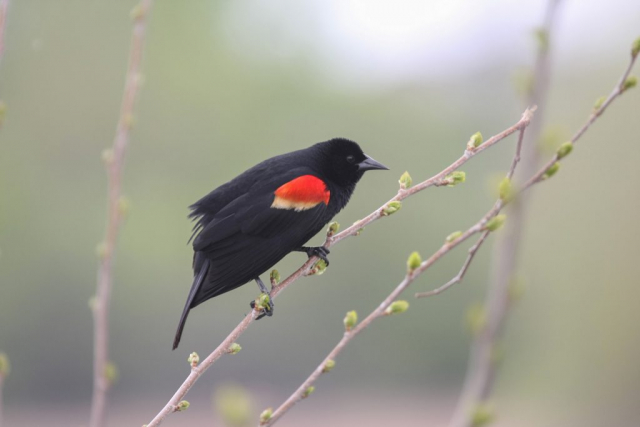 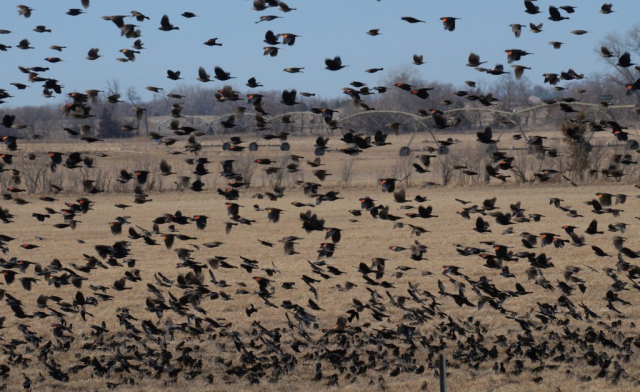 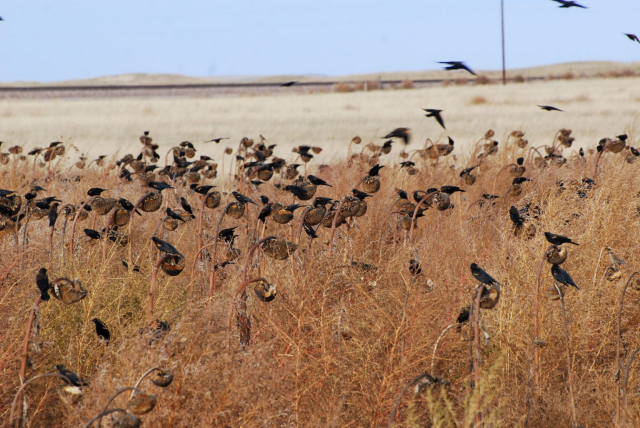 This species account was improved through discussions with Jon King regarding taxonomy of this species.