Pollet et al (2020) indicated that there are two breeding populations, eastern and western, that can generally be distinguished mensurally; Nebraska birds show much variation in size, probably as the two populations mix in Nebraska during migrations and winter (see Comments).

Spring: Arrival of northward migrants is indicated by a notable increase in numbers of wintering birds by late Feb or early Mar, peaking in mid- to late Mar, although there is both north and south movement in early spring in response to water/ice conditions and weather. Small flocks, mostly of sub-adults, follow in Apr and May. A group of 35 at Hedgefield WMA, Lancaster Co 28 Apr 2013 was comprised of immatures.

Summer: Small numbers of immature non-breeders can be found in summer at larger lakes and reservoirs throughout the state. The nearest regular breeding is in northeast South Dakota (Tallman et al 2002), although nesting has occurred in Wyoming (Faulkner 2010) and there is an old record for Colorado (Wickersham 2016). See Comments.

Peak counts occur between late Sep and early Jan; timing and numbers are dependent on water/ice conditions and weather. Pollet et al (2020) indicated that individuals of the eastern population that winter along the west coast of the Gulf of Mexico (Louisiana, Texas) move south through the Mississippi Valley, and that birds from the western population also winter uncommonly in Texas and further south, passing through the Great Plains states.

Winter: Wintering numbers are dictated by the severity of the winter; generally, small numbers overwinter at larger reservoirs with open water. Smallest numbers are usually found during Jan, and numbers slowly begin to build at certain reservoirs, such as Lake McConaughy, in late Jan and Feb. In the northwest, it may depart entirely in winter, as Rosche (1982) cited extreme occurrence dates 3 Mar-27 Nov.

Comments: There is a single egg which may be of this species in the UNSM collection, obtained from Lake McConaughy in 1992 (Roger Knaggs pers. comm.). A technician working on Piping Plovers at the west end of Lake McConaughy found a nest with two eggs in dead cattails and an adult bird “coming and going” on 22 Jul 1992. The nest was washed out by high water and only one egg recovered and sent to UNSM. A photograph of the “nest”, also at UNSM, apparently was taken after the original nest was washed out; Thomas Labedz (pers. comm.) doubted from this photo that there was a real nest and suspected that the egg may have been “dumped”.

Pollet et al (2020) stated that “birds from western populations are larger in 16 of 18 (89%) mensural characters that differ significantly”. Apparently, the eastern population re-established itself after being extirpated in the 19th century; by the early 1900s the species bred only in the inland prairie regions of the Unites States and Canada but has re-occupied its former range (Pollet et al 2020). 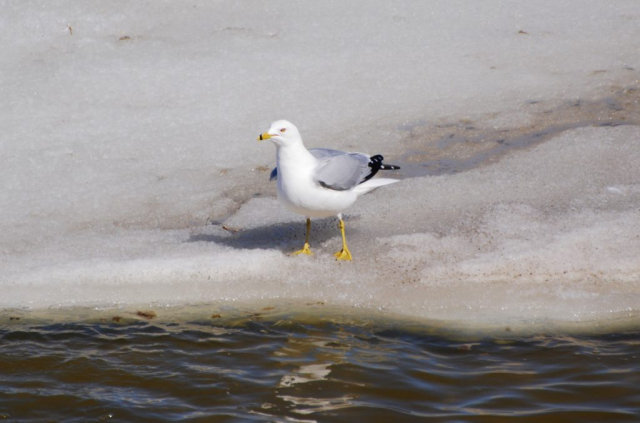