Taxonomy: As many as 11 subspecies are recognized although those south of the United States are not well-delineated (Lowther et al 2020, Pyle 1997). Only two subspecies occur north of Mexico: obsoletus throughout most of the northern range including Nebraska, and pulverius of San Nicolas Island, California.

In northern parts of the breeding range, including Nebraska, Rock Wrens are migratory. Arrival is in mid-late Apr.

Summer: Rock Wrens are most common in the Panhandle and in the southwest in xeric, rocky areas. Mollhoff (2016) shows the breeding range essentially west of a line from Dawes Co to Lincoln Co and south to Red Willow Co, excluding the western Sandhills. There are confirmed breeding records throughout this area, except for the Sandhills between the Niobrara and North Platte Rivers in Box Butte, southern Sheridan, and northern Garden Cos (Mollhoff 2016). In the southwest, there are breeding records from the North Platte and Platte River Valleys south and east to Lincoln, Frontier, and Red Willow Cos (Mollhoff 2016).

In Lincoln Co and probably southwest Dawson Co, Rock Wrens are common in cedar canyons, utilizing dirt road cuts; 12-15 were in cedar canyons in Lincoln Co 15 Jul 2008. It nests regularly in the Lake McConaughy area, Keith Co, although cedar encroachment in recent years has reduced the population (Brown et al 2012). Breeding may occur in extreme southeast Logan and in Custer Cos, although there is no recent confirmation of this; there are older records of breeding in both counties (Youngworth 1955, Ducey 1988, Ducey 1989).

Rock Wrens have bred at Ashfall Fossil Beds SHP, Antelope Co, where young were fledged in 1992 (Gubanyi 1996, Grzybowski 1992); there are more recent reports there 5 May-6 Jun 2010. The breeding range once extended much further to the north and east, with records from Cherry and Brown Cos (Youngworth 1955, Ducey 1989). The presence of a small breeding colony near Sioux City, Iowa, in the late 1890s and early 1900s (Kent and Dinsmore 1996) suggests the Niobrara Valley as a route for birds to travel eastward. There are these records from northeastern Cherry Co: 16 May 2015, 23 Jun (James E. Ducey, personal communication), 6 Jul 2014, and 14 Jul 1977, and one was near Sparks, Keya Paha Co 1 Aug 2021. A Rock Wren was seen near abandoned buildings in Brown Co in Apr and May 1982, but no evidence of nesting was observed (Brogie and Mossman 1983), and one was on riprap near Niobrara, Knox Co 21 May 1994. The only other breeding season report elsewhere was in Adams Co 16 Jun 2007.

Most depart by early Oct, although there are wintering reports from the Lake McConaughy area (see Winter). Away from the breeding range migrants occur in Sep and early Oct.

Winter: An extremely late bird was at Lake McConaughy 21 Dec 2003 (Brogie 2005). Wintering may occur on the rocky south shore of Lake McConaughy, as one was there 18 Feb 2016 and was said to occur there “each winter on the rocks” (Jay and Ginger Belsan, personal communication). One was photographed at this location 31 Dec 2016 on the Lake McConaughy CBC. There are no other reports Nov-Mar. Lowther et al (2020) stated “Some individuals remain resident at northern limits of breeding range”. 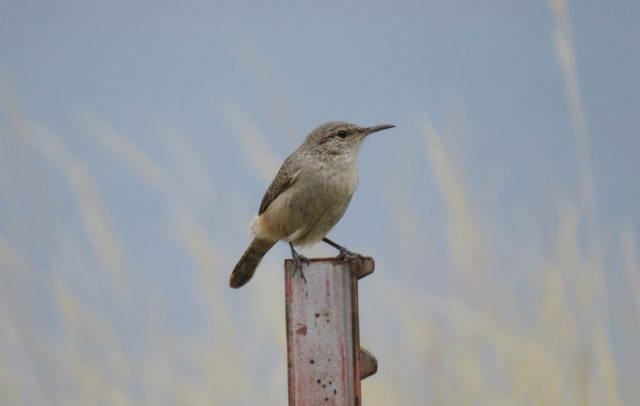