Later dates west and west-central are of birds not known to be breeding; there are no reports 9 Jun-14 Jul. See Summer.

Migrants generally appear in early May, although early dates are in late Apr. However, one at a Bayard, Morrill Co feeder 22 Apr 2001 had been there about 10 days, and another was early in the west-central in Lincoln Co 1 May 2020. The earliest date for Kansas is 22 Apr (Thompson et al 2011), the same as for Iowa (Kent and Dinsmore 1996).

Summer: Bruner et al (1904) stated that Rose-breasted Grosbeak bred in the eastern third of Nebraska, west to about Grand Island, whereas Rapp et al (1958), while noting that the species bred in the eastern half of Nebraska, stated that “There is evidence that this bird is moving westward through the major river valleys.” Recent information does not support any further significant westward spread, however. Johnsgard (1979) considered the western extent of the breeding range difficult to discern due to hybridization with Black-headed Grosbeak but noted that Rose-breasted Grosbeak bred west to Holt, Garfield, and Phelps Cos, similar to the western extent of the range of phenotypically pure Rose-breasted Grosbeaks noted by Short (1961). The two breeding bird atlases (Mollhoff 2001, 2016) show minimal change between 1984-1989 and 2006-2011, except perhaps for the western edge of the range in the Loup River drainage, the southwest, and in three Panhandle counties (Box Butte, Sheridan, Scotts Bluff); breeding, however, was confirmed west only to Sherman Co.

Currently, Jun-Jul records are broadly distributed in the eastern half of the state and west in Platte River Valley counties to the North Platte area, including the Republican River Valley west to Harlan Co (see specific river valley information below).

In the Platte River Valley, it has been present since 2005 in increasing numbers in summer in cedar canyons of southeast Lincoln Co, eastern Hayes Co and western Frontier Co at Red Willow Reservoir; it probably breeds throughout this area (T.J. Walker, pers. comm.). Two immatures, identified by their red wing linings, were at Brady, Lincoln Co 4 Aug 2003, but no adults were seen. Black-headed Grosbeak breeds commonly in this area also (Mollhoff 2016).

In the Republican River Valley, it occurs west to the Harlan Co area; Swenk (1936) found it west to Inavale, Webster Co. West of there, Black-headed Grosbeak and hybrids are common.

Breeding in the Niobrara River Valley currently is limited to the lower portion, west to the Niobrara Valley Preserve area where Keya Paha, Brown, and Rock Cos meet; the meeting point of the breeding ranges of Rose-breasted and Black-headed Grosbeaks occurs there. As recently as the early 1980s, Brogie and Mossman (1983) found Rose-breasted Grosbeak common in the Niobrara Valley Preserve, but it appeared only as a spring migrant in May, and “Evidently none stayed to nest.” However, Youngworth (1955) found Rose-breasted Grosbeak breeding in northeast Cherry Co in the 1930s; Swenk (1936) reported a nest with eggs found by W. C. Smith near Long Pine, Brown Co 6 Jun 1898 (Mollhoff 2022). Mollhoff (2016) showed breeding season reports west only to the Niobrara Valley Preserve area, unchanged from 1984-1989 (Mollhoff 2001). One was near Sparks, Keya Paha Co 13 Jun 2021. There is a Cherry Co report 16 Jun 1977, and recent reports from Fort Niobrara NWR in northeast Cherry Co 28 Jun 2016 and 14 Jul 2016.

In the North Platte River Valley, there are few reports; this area is well within the range of Black-headed Grosbeak, and reports are likely lingering westerly spring migrants, such as the presence of a male at a Mitchell, Scotts Bluff Co feeder with a Black-headed Grosbeak family 24 Jul 2004. However, Brown and Brown (2001) stated that “it presumably breeds in the [Keith Co] area. No nests have been found, but one bird with a brood patch was mist-netted 16 May.” The only other recent reports west of Keith Co are of one in Gering, Scotts Bluff Co 10 Jul 2013 and reports at Crescent Lake NWR, Garden Co 2-13 Jun 2008 and 5 Jun 2010.

Reports are less than annual in fall in the west and west-central; there are only 15 reports, all 15 Jul-22 Sep.

Departure begins in late Jul-Aug and is completed by early Oct. 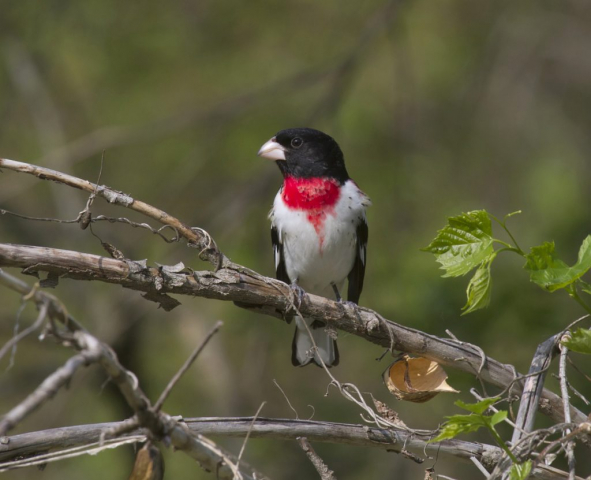 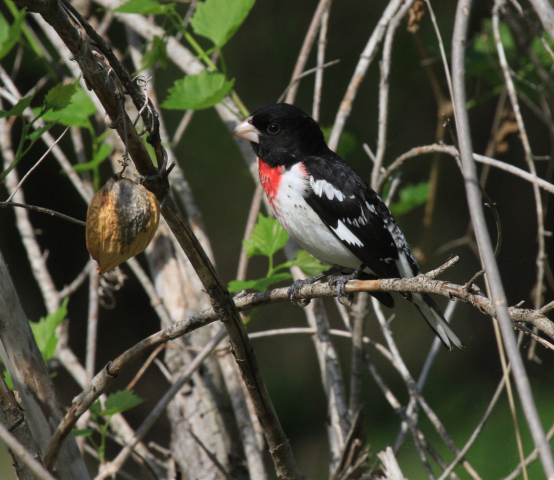