Summer: There are eight records:

Comments: This species hybridizes with Black-headed Grosbeak where their ranges meet (Short 1961, Swenk 1936, West 1962). Both “pure” birds and hybrids are found in the zone of overlap (Short 1961), an indication of some degree of assortative mating, the primary reason why these species have retained specific status (Mayr and Short 1970, AOU 1983, Sibley and Monroe 1990). Interestingly, there is evidence that hybrids mate assortatively with other hybrids (Anderson and Daugherty 1974, Wyatt and Francis 2020). It has been suggested that the extent of hybridization of the grosbeaks is greater in the central Great Plains, including Nebraska (West 1962), where densities are relatively low, and habitat is patchy, than in the northern Great Plains, where densities of both species are high, and habitat is extensive (Kroodsma 1974, Wyatt and Francis 2020).

Individuals showing characters indicative of hybridization (West 1962) are widespread in central Nebraska. Short (1961) found phenotypically pure Rose-breasted Grosbeaks west to Burwell and Elm Creek; there was evidence of hybridization in the Platte River Valley from Colfax to Dawson Co, and in Saline, Adams, Howard, and Holt Cos. West (1962) found the greatest incidence of hybrids in the area between Central City and Gothenburg in the Platte River Valley.

Around 1900, Rose-breasted and Black-headed Grosbeaks’ ranges were not in contact; Rose-breasted was found west to the 98th meridian, a line from Knox to Nuckolls Counties, and Black-headed Grosbeak east to approximately a line from connecting Boyd and Webster Counties (Bruner et al 1904). The ranges had met by the 1920s, however, based on hybrid specimens collected in Hall and Clay Counties 1920-1930, and in Lancaster Co in 1930 (Swenk 1931, 1936, Mollhoff 2022), and by 1961, the greatest incidence of hybrids was found in the area between Central City and Gothenburg in the Platte River Valley (Short 1961, West 1962). Hybrid specimens UNSM ZM7076 and UNSM ZM7077 were collected at Grand Island, Hall Co 28 Jun 1930 and Inland 18 May 1920 respectively, and another hybrid specimen HMM 2897 was taken at Inland, Clay Co 24 May 1923. A hybrid was in Howard Co 3 May 2015. In the North Platte River Valley at Lake Ogallala, Keith Co, two of five banded birds which appeared to be Rose-breasted Grosbeaks showed some Black-headed Grosbeak characteristics, while the reverse was true of five of 35 Black-headed Grosbeak types (Brown et al 1996). A hybrid male at Box Butte Reservoir, Dawes Co 8 Aug 1992 was described by Rosche and Rosche (1993). Two birds showing hybrid characteristics were banded at Wildcat Hills NC, Scotts Bluff Co 12 and 24 Sep 2009. An indication of the degree of introgression that occurs at the range boundaries of this species and Black-headed Grosbeak was the angry response and appearance by a previously unseen phenotypic Rose-breasted to a Black-headed tape 4 Jul 2016 in Gosper Co. 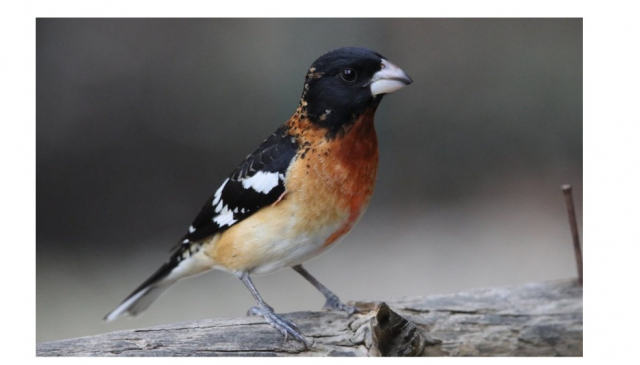