Changes Since 2000: This species has occurred in increasing numbers westward, with multiple reports from the Panhandle, especially in fall. Some of this increase may be due to an increase of feeders placed around residences, which would naturally increase detection of the species, rather than actual increased occurrence. There are breeding records west to Keith Co, but not yet in the Panhandle itself.

The westernmost records are from the Panhandle, most notably, a hybrid male photographed in Dawes Co 6 May 2014, joined by a female Ruby-throated 22 May, copulation was observed, both were present through 7 Jul and the male until 10 Aug (Juanita Whittecar, eBird.org). One was at Wind Springs Ranch, Sioux Co 18 May 2009, an adult male was studied carefully in a yard near Mitchell, Scotts Bluff Co 29 May 2012, a female was photographed in a Dawes Co yard 29 May 2014 (Juanita Whittecar, pers. comm.), a female in the same Dawes Co yard 6 Jun 2021 (Juanita Whittecar, pers. comm.), and an apparent lingering spring arrival near Gering 23 Jun 2022.

Summer: Ruby-throated Hummingbirds breed mostly in the Missouri River and lower Platte River Valleys, with lower densities occurring elsewhere in far eastern Nebraska. See under Spring (above) for a summer record in Dawes Co in 2014.

In the Platte River Valleys, reports are recent, west to Scotts Bluff Co; a female was in a yard near Mitchell 10-14 Jun 2012, joined by a male 31 May but not later, and an adult female was there “all summer” 2013, joined by a male 16 Jun. There are several reports in Keith Co, including a reported nest in Ogallala in 2003 (William Huntley, personal communication); additional reports from Ogallala are of three birds at different feeders 2 Jun-2 Jul 2008, and two at a feeder 2-29 Jun 2012. A male and female visited a feeder at a residence on the north side of Lake McConaughy, Keith Co 6-20 Jun 2001 and for a few days after that, but no nest could be found (William Huntley, personal communication). There are several reports in Lincoln Co, including a pair at Brady all summer in 2008 and a pair photographed in a rural Lincoln Co yard all summer 2013. Two at Bassway Strip WMA, Buffalo Co 22 Jun 2021 and a male in Hall Co 30 Jun 2021 may have been breeders.

This species does not appear to nest regularly in the Niobrara River Valley west of the confluence with the Missouri River (Johnsgard 1979, Brogie and Mossman 1983). The only reports further west are of a pair with a nest at the Valentine Fish Hatchery, Cherry Co in late May- early Jun 2002, a nest at Smith Falls SP, Cherry in 2016 (Gordon Warrick. pers. comm.). two pairs found 17 miles northeast of Bassett, Rock Co 15 Jun 2000, and older summer reports for Brown Co 1964 and 1970.

The species was reported to have nested for at least a few years prior to and including 1956 at Kearney (Ludden 1956), and Tout (1947) listed it as a “summer resident,” probably breeding, in Lincoln Co. The only indication of summer occurrence in the western Loup drainage is from NNF Bessey, Thomas Co, where it was a “rare summer visitor” (Bray 1994).

Migrants occur somewhat further west than in spring, and probably occur every year in small numbers in the Panhandle, where there are about 30 records 22 Jul-18 Oct. A Scotts Bluff Co observer stated, “we have a couple every year”. There is a specimen 3 Sep 1912 Thomas Co (UNSM ZM10637).

Comments: Determining how many hummingbirds visit a given yard in a season is difficult to assess. Careful studies indicate far larger numbers than generally realized. Exhaustive recording and subsequent analysis by four video and one still cameras operating continuously in the Ron and Susan Whitney yard in Lincoln, Lancaster Co provide some insights. For the years 2007-2014 inclusive, the daily tally in fall varied from 13 to 112, the latter in 2011, but in 2015 an amazing 266 individuals were counted; peak day was 11 Sep, when 36 were counted. A feeder operator in Buford, Wyoming reported similarly large numbers (WYOBIRDS@HOME.EASE.LSOFT.COM): On 22 Jul 2016, he had “11 feeders up, with seating ranging from 3 to 8 on each. Most days I have about 80% occupancy, and all the feeders have to be refilled daily. A University of Wyoming team captured “oodles” of birds in a few hours with no recaptures, which the team indicated meant “you have a lot of hummingbirds”. 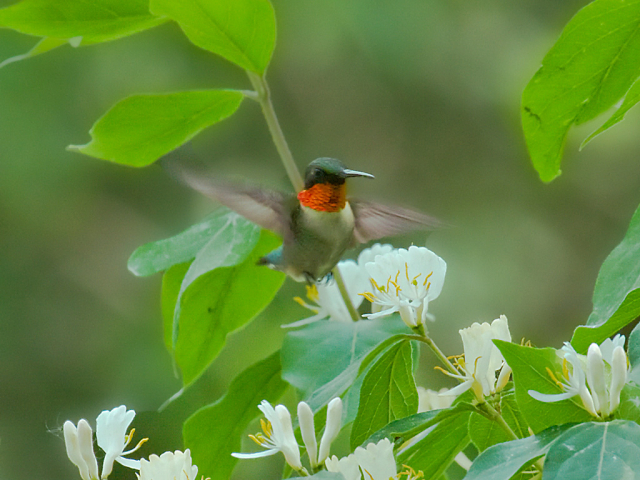