One with an all-white head was at Whitman, Grant Co 14 and 20 Mar 2018; this condition is not mentioned in major waterfowl references and is probably an example of bilateral partial leucism.

Changes Since 2000: Reports of Ruddy Ducks overwintering or lingering well into Jan have increased; overwintering was first noticed at Lake Ogallala, Keith Co in 1999-2000 and at Carter Lake, Omaha, Douglas Co in 2011-2012.

See Summer for later dates from locations where breeding was not noted. Peak numbers occur in mid-Apr.

Summer: The highest breeding densities are found in the western Sandhills (Mollhoff 2001). Breeding also occurs irregularly in the Rainwater Basin, often in response to periods when wetlands have relatively high water (Jorgensen 2012, 2016). There are about 25 documented instances of breeding in the Rainwater Basin, including four in 2019 (Jorgensen and Brenner 2019), as well as numerous summer reports without breeding evidence.

In the southeast, there are several breeding season reports from Lancaster and Douglas-Sarpy Cos including a male at Oak Lake, Lincoln, Lancaster Co 20 Jun 2015, a female at Pawnee Lake, Lancaster Co 21 Jul 2006, and a female in Douglas Co 29 Jul 2016. There is only one record of breeding, however; Cink (1975) reported a female with three young near Sprague, Lancaster Co 25 Jun 1972. Higher than normal water levels in the east in 2008 allowed up to seven, including five males, to summer in Sarpy Co. Similar abundant water in 2019 resulted in good numbers summering statewide; most were presumed immature non-breeders, as a high proportion of Ruddy Ducks do not breed until two years of age (Baldassarre 2014).

Elsewhere there are several summer reports (18 Jun-11 Sep) without evidence of breeding. Breeding males remain on the breeding grounds until late Jul or early Aug, where some molt; most do not disperse long distances for the pre-basic molt (Baldassarre 2014, Howell 2010). In Harlan Co, there are seven records 12 Jun-30 Jul including a flock of 17 probable non-breeders in basic plumage at Harlan Co Reservoir, Harlan Co 16 Jun 2000. Many non-breeders remain on the wintering grounds through the breeding season (Brua 2020).

Migrants are evident in scattered low numbers by early Sep and peak numbers occur from mid-Oct into early Nov. A few linger into late Dec, but this is not a cold-tolerant species. Unusually late high counts were the 55 at Wehrspann Lake, Sarpy Co 20 Dec 1998 and 29 at Lake McConaughy 30-31 Dec 2011. 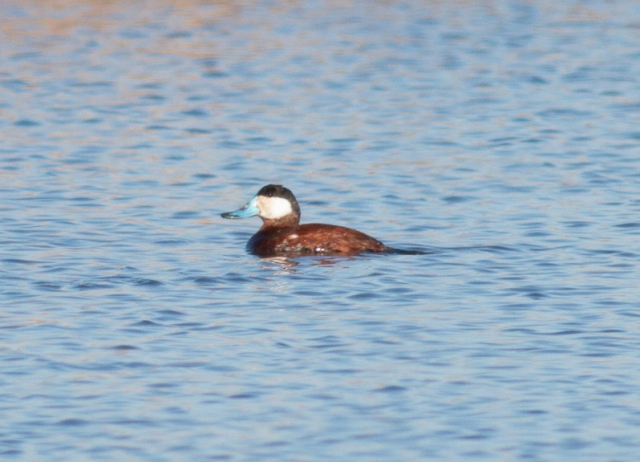 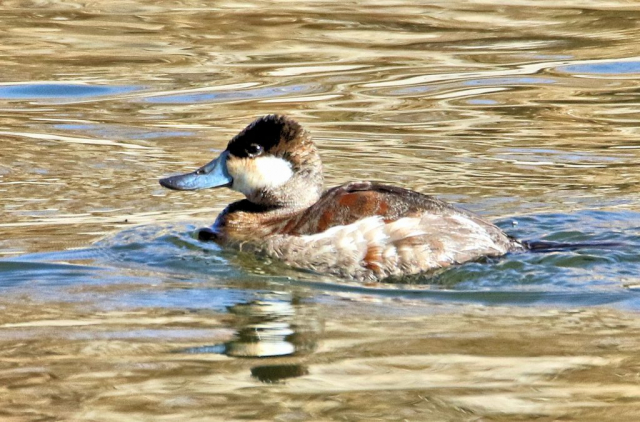