See Comments below regarding Allen’s Hummingbird (S. sasin), as yet unrecorded in Nebraska.

Spring: The only documented record is of one photographed at a feeder at Lake McConaughy, Keith Co 17 May 2013 (Silcock 2013). During the same spring, a possible Rufous Hummingbird was in a Scotts Bluff Co yard 30-31 May, but it was not conclusively identified (Silcock 2013).

Spring records of this species away from the Rocky Mountains are rare; the only record away from the mountains in states adjacent to Nebraska is of an apparent male in central Iowa 19 May 2020 (eBird.org).

Later dates away from the expected migration corridor are numerous and mostly in the east. There are 34+ such records, including the latest dates for the state, reminiscent of Broad-tailed Hummingbird.

Comments: Identification of females and immatures of Allen’s Hummingbird as well as the not uncommon hybrids with Rufous Hummingbird has been discussed by Clark and Mitchell (2020). Green-backed Rufous Hummingbirds occur, as do Allen’s with minimal green feathering on their backs; some of these may be hybrids (Clark and Mitchell 2020). While the possibility of Allen’s occurring in Nebraska cannot be eliminated, it is highly likely that the overwhelming majority of Rufous/Allen’s Hummingbirds in Nebraska are indeed Rufous (Silcock and Jorgensen 1996). The only record of Allen’s from states neighboring Nebraska is of an immature male banded, photographed, and identified from “selected rectrices” in Wyandotte Co, Kansas 25 Aug 1992 (Thompson et al 2011). 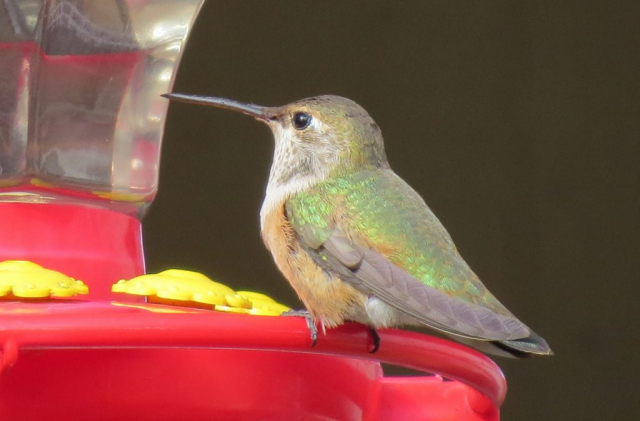