Taxonomy: Two subspecies are recognized (Avery 2020, Jaramillo and Burke 1999): nigrans, breeding in Newfoundland, Nova Scotia, and the Magdalene Islands, wintering south to Georgia, and carolinus, breeding across Alaska and Canada, wintering from southeast Alaska and southern British Columbia east to Ontario and south (generally east of the Great Plains) to east Texas and Florida.

Early dates above for central are for the north, away from Platte River Valley.

In the Panhandle, Rusty Blackbird is less than annual in spring; there are several undocumented reports, and only these with details: 1-2 at Clear Creek WMA, Garden Co 27-28 Mar 1999, and one at Oliver Reservoir, Kimball Co 13 Apr 2019.

Rusty Blackbird has been declining throughout its range for decades and these declines have been observed in the central plains (Greenberg and Matsouka 2010). Bruner et al (1904) considered it a common migrant. In Kansas, Thompson et al (2011) stated Rusty Blackbird was “once common during migration and during the winter … but has become irregular with reduced numbers”; Avery (2020) noted an “alarming decline” of 85-95% during the period 1970-2010.

The many published reports without details, some in May and later, no doubt result from confusion with Common Grackle or Brewer’s Blackbird (see Comments). The latest specimen date for spring in Kansas is 17 Apr, and there are no Kansas sight records later than 1 May (Thompson et al 2011).

Migrants are more widespread in fall than in spring. Arrival is in mid-Oct. Peak fall migration probably occurs in late Oct and Nov.

Winter: This species winters regularly in the southern parts of the state, with most in the east, but occasionally further north, especially in the Missouri River Valley, where there are early Feb reports in Pierce and Dakota Cos. A group of 1-4 wintered at Ike’s Lake, Wayne Co 14 Jan-23 Feb 2022.

Comments: Rusty Blackbird may be associated with more misidentifications than other blackbirds occurring in Nebraska. A specimen, UNSM ZM10595, collected at Crawford 12 Sep 1911 and labeled as this species is in fact a Brewer’s Blackbird. Rosche (1982) noted that a Rusty Blackbird specimen in the collection at Chadron State College was mislabeled as an immature Brown-headed Cowbird.

There are numerous undocumented reports for the period May-Aug, including one putative record of breeding in Hall Co in 1972 (Ducey 1988) which is disregarded (Johnsgard 1979, Mollhoff 2022). There are five recoveries of birds identified as Rusty Blackbirds which were banded in Arkansas and recovered in Nebraska in May and Jun: 9 May 1934 Antelope Co, 29 May 1932 Madison Co, Jun 1940 Antelope Co, 10 Jun 1931 Saunders Co, and 12 Jun 1931 Fillmore Co. Discussion with Danny Bystrak of the Bird Banding Laboratory (Dec 2016) suggested that the dates of these recoveries were most likely incorrect and were more likely the dates the recovered bands were reported to the Bird Banding Laboratory. 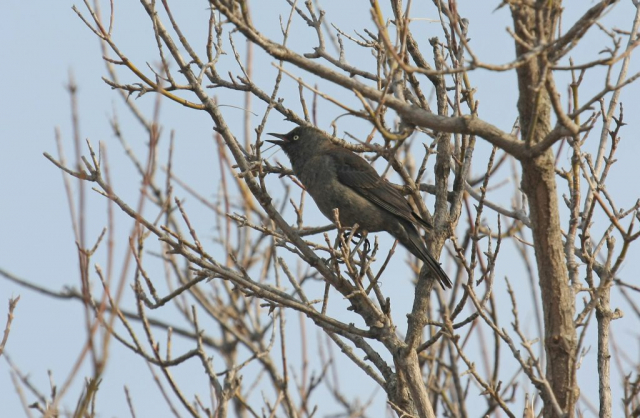 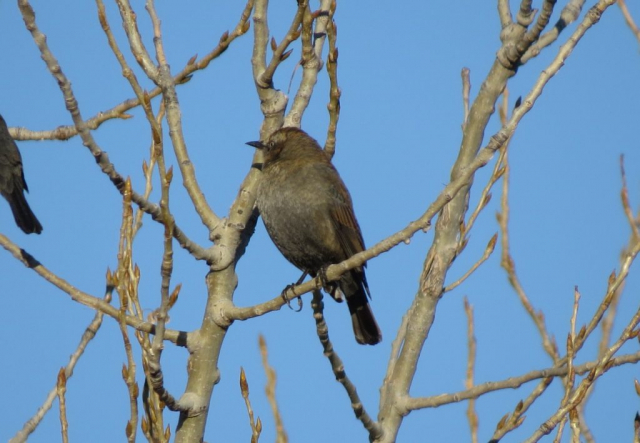