Later dates are of an injured bird 20 Jun 2013 at Lake McConaughy, Keith Co, and seven on 21 Jun 2005 Lake McConaughy. Most arrive in the latter half of Apr; peak counts are in May.

Sanderling plumage is variable in spring due to molt and sexual dimorphism (Macwhirter et al 2020).

Adults generally arrive during the third week of Jul, although the earlier dates are probably of failed breeders, which depart breeding grounds in late Jun (O’Brien et al 2006). Adults are rather uncommon in Nebraska and usually do not remain for extended periods. Juveniles arrive during the latter part of Aug and comprise the majority of birds reported thereafter. Fall numbers are lower than those in spring.

Comments: The number of Sanderlings observed during migrations in Nebraska has increased, probably a result of reservoir construction and new lakes providing (at least at times) extensive sandy shorelines that attract this species. Previously, sandy shoreline habitat was limited to river sandbars and some Sandhills lakes; Tout (1947) did not have any Lincoln Co records until the construction of Lake Maloney. 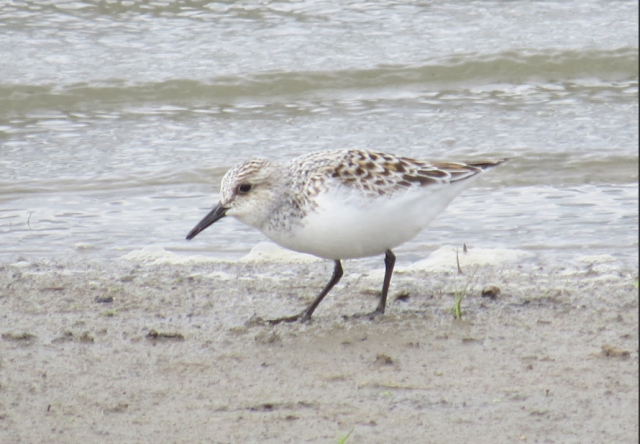