According to AOU (1957), subspecies nevadensis breeds in western Nebraska, and apparently migrates through at least western and central Nebraska. Swenk (Notes Before 1925) stated that most migrants in the Inland, Clay Co and Kearney, Buffalo Co areas were nevadensis, but a 14 Apr 1914 specimen was of an “eastern” subspecies, probably savanna. Bruner et al (1904) described savanna as “a rather abundant migrant especially eastwardly”; this subspecies breeds commonly in northern and eastern Iowa (Kent and Dinsmore 1996) and has been recorded rarely in winter in Kansas (AOU 1957; Johnston 1965). There is a specimen of oblitus taken in Lancaster Co 9 Apr 1909 (UNSM ZM10432); based on its breeding and wintering ranges, this subspecies should occur regularly in Nebraska.

Although as yet undocumented for Nebraska, it seems likely that the northern Great Lakes subspecies labradorius might occur in Nebraska as a migrant, as it winters south and west as far as southeast Texas (Pyle 1997); oblitus was merged with its neighbor to the east labradorius by Wheelright and Rising (2020). Rapp et al (1958) listed the Alaskan and western Canadian subspecies anthinus for Nebraska, presumably occurring as a migrant in the west. This subspecies breeds from Alaska to British Columbia, and so a few may migrate southward east of the Rocky Mountains as do other species breeding in the Pacific Northwest (e.g., Cassin’s Vireo, Townsend’s Warbler).

To summarize, breeders in Nebraska, which occur only in the northwest, are nevadensis, and it, along with savanna and oblitus are the expected migrants through the state. Possible additional migrants, as yet undocumented, are labradorius in the east and anthinus in the west.

Earlier dates in Mar, as well as those for Dec-Feb, are discussed under Winter. There are eight reports 3-9 Mar in the south and east that are as likely likely wintering birds as early migrants (see Winter); there is an uptick of reports beginning in mid-Mar (eBird.org, accessed Mar 2021).

Later dates from areas where breeding seems unlikely are 30 May 2020 Buffalo Co and 6 Jun 2016 Pawnee Co.

Late May and early Jun dates are indicative of potential summering birds, especially in the northwest.

Migration is from late Mar through early May.

Summer: The breeding range of this species barely reaches the northern and western edges of Nebraska (Johnsgard 1979); summering habitat consists of damp swales in grasslands (Rosche 1982). There is only one documented breeding record, but there are other summer reports, mostly in the Panhandle, indicative of isolated breeding colonies.

The first and only confirmed breeding record was of an adult flushed from a nest with four eggs along Spotted Tail Creek in southern Sioux Co 15 Jul 1994 (Malone and McKinney; Silcock and Rosche 1994, Mollhoff 2022); birds were present there for a few years but were absent in 2010 (Wayne Mollhoff, pers. comm.). This general area seems favorable for the species; a specimen, UNSM ZM7288, was collected at Mitchell as long ago as 7 Jul 1916 and there is a breeding record for Mitchell (AOU 1957). One was in Scotts Bluff Co 31 Jul 2010, and a singing bird was a few miles south of Mitchell 25 Jun 2014 in an area where suitable habitat exists. There were two records from Scotts Bluff Co in 2019: one singing in a grassy area at Scotts Bluff NM 12 Jun and another in more typical habitat along Highway 26 near Minatare 4 Jun.

A persistent location is the Hay Springs Creek area south and west of Hay Springs, Sheridan Co. Singing birds were found regularly three miles north of Walgren Lake and also about two miles west of Hay Springs from 1973 into the late 1990s, the latter location close to where Mollhoff found three pairs 11 Jun 2011; a breeding colony of six birds had established there by 12 Jul 2011 and 14 were present including four newly fledged young 20 Jul (Mollhoff 2022). This site has been occupied since (Mollhoff 2022); four territorial birds were there 11 Jun 2013, one or two pairs on 12 Jun 2015, and 1-2 territorial birds on 21 May 2018.

Rosche (1994) considered a colony at Kilpatrick Lake, Box Butte Co to be the “largest colony known in Nebraska”; singing birds were known from this location as early as 1990 (Grzybowski 1990) but reports there since are lacking. Two were recorded 11 Jul 2022 at playas along Dakota Road at Highway 87, Box Butte Co.

Breeding may have occurred at several locations, as follows.

East of Lakeside, southern Sheridan Co, birds were present four years out of 10 including 26 Jun 1981 (Richard C. Rosche, personal communication). Breeding was “confirmed” at Valentine NWR, Cherry Co 29 Jun 2006 although no details were provided, and one was at Fort Niobrara NWR, Cherry Co 8 Jul 1999. In 2022, one was at Valentine NWR 6 Jun and another at Fort Niobrara NWR 2 Jul.

There are a few undocumented late spring and summer reports from the east where breeding seems unlikely; Thompson et al (2011) stated that spring stragglers are found into Jun, some of which may be yearling females, which arrive somewhat later on the breeding grounds (Wheelwright and Rising 2020).

Jul and early Aug dates are indicative of breeding if in suitable habitat (see Summer).

Evidence that migration begins in early Aug was provided by the presence of one at a McPherson Co site 9 Aug 2011 where none were found earlier, and the apparent departure by 10 Aug 2011 of 12 of 14 birds seen earlier at a summering site near Hay Springs. The latest specimen date is 2 Nov 1907 Lancaster Co (UNSM ZM10444).

Winter: There are two documented instances of overwintering in Nebraska. Up to six were at Branched Oak Lake, Lancaster Co 2011-2012, and there were four reports of what was probably a single individual at Boyer Chute NWR, Washington Co 26 Dec-20 Feb 2012-2013.

Sightings in late Dec-early Mar are rare and probably indicative of wintering birds; such records are increasing as of 2020-2021. During winter 2012-2013 there were several additional mid-winter reports: two were in Jefferson Co 22 Jan, one was photographed at Rowe Sanctuary, Buffalo Co 5 Feb, one was in western Seward Co 13 Feb, and one was in Dodge Co 26 Feb. One was in Omaha, Douglas Co 13-14 Feb 2014. Winter 2015-16 added three more Feb records: one was at Branched Oak Lake 4 Feb, two were at Boyer Chute NWR, and one was in Otoe Co 22 Feb. One was reported in Sarpy Co 19 Feb 2017, and one at Marsh Wren Community Wetlands, Lancaster Co 1 Mar 2022.

Savannah Sparrow winters on occasion in southern Kansas (Thompson et al 2011) and northern Missouri; Robbins (2018) noted that there has been a “dramatic” increase in wintering numbers in central and southern Missouri. 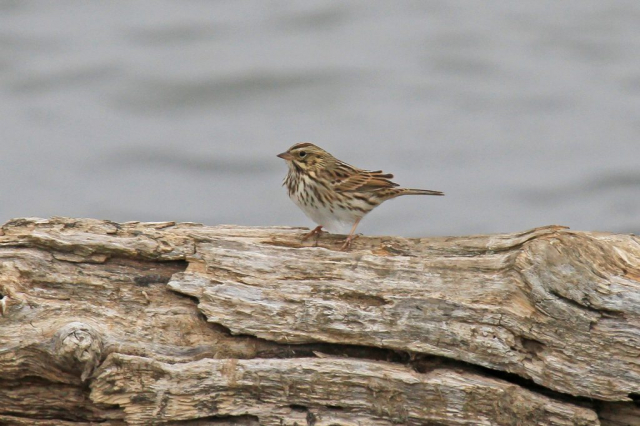 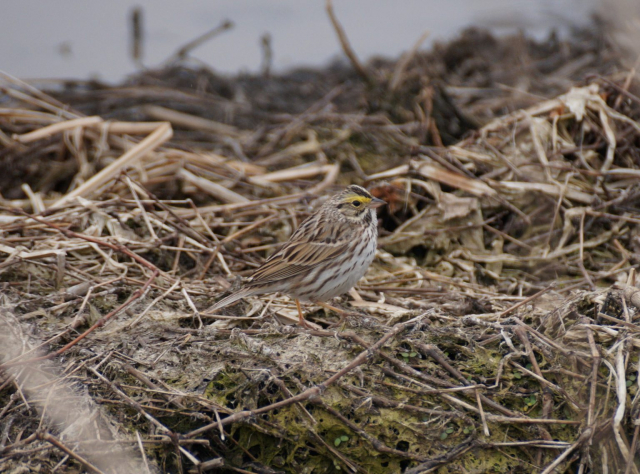