Taxonomy: The North American taxon stellaris differs from all other taxa within former C. platensis in being polygynous, migratory, non-site specific, and having an improvised song, leading to its elevation to specific status as monotypic C. stellaris Sedge Wren (Robbins and Nyari 2014, Gill and Donsker 2017, Chesser et al 2021).

Changes Since 2000: Nesting in May-Jun in Nebraska was essentially nonexistent until about 2000, when such reports started to increase dramatically. Previously, breeding Sedge Wrens were not present until mid-Jul (see Summer).

There is a well-defined movement in Apr and May, with small numbers remaining to breed, then a return migration beginning in mid-Jul and continuing into Oct. Early fall migrants are potential intra-seasonal double breeders (see Summer). Reports into early Jun may be late migrants or birds attempting to breed.

Summer: The Sedge Wren has one of the more complex and difficult to define breeding strategies amongst Nebraska’s birds. Its occurrence, understanding of which is based largely on the presence of singing males, has definable patterns from spring through early fall, but is variable and apparently evolving. There are two apparent peaks in numbers per breeding season in Nebraska (“early peak” and “late peak”), possibly comprised of different individuals and representing different populations. Both are restricted mostly to the eastern half of the state (Mollhoff 2016) but separated by breeding phenology; the first peak in numbers is typical of most migratory passerines breeding in the state, involving nesting in spring and early summer. The second peak in numbers occurs in mid-summer and involves birds arriving and apparently nesting during late summer. Regarding the latter influx, Robbins and Nyari (2014) stated “Unique [to the North American subspecies, stellaris] is the intra-breeding seasonal movement, presumed to be from north to south that results in double breeding” (see below). Interesting observations of the timing of the two seasons were made in 2022 at Flanagan Lake, Douglas Co, where early breeders were four pairs along the northeast part of the marsh through 26 Jun, while late season arrivals, six on 27 Jul, set up on the west side of the lake (Val Kollath, eBird.org).

Sedge Wren has rather exacting breeding habitat requirements, best-described as damp grassy or sedge meadows; Bedell (1996) described a preferred habitat type as “sub-irrigated native meadow”, although this habitat type is restricted essentially to the central Platte River Valley. In Nebraska, territorial birds are most often found in lush mid- and tall-grass prairie during summers with above-normal precipitation. Nests are well-hidden and low in dense vegetation over damp ground or mud or at most a little standing water. Such habitat is extremely sensitive to weather conditions, and it appears that this species has the ability to search out suitable habitat and breed as late as Aug if necessary.

Breeding during spring and early summer (the early peak) has been rare in Nebraska, with few confirmed records, but beginning around 2000, reports of Sedge Wrens in Jun have increased markedly, albeit without documentation of breeding. Between 2009 and 2018 there were around 30 reports of Sedge Wrens 23 May-11 Jul; in 2020 alone there were at least 40 reports from seven locations in Dakota, Lancaster, Saunders, Douglas, and Gage Cos, and in 2021 up to five were at Flanagan Lake, Douglas Co through 1 Jul and up to four at Frank Shoemaker Marsh, Lancaster Co through 29 Jun. Documented nesting records during this early peak period include a nest with five young in Thurston Co 24 Jun 1971 which was the first in Nebraska for at least 70 years (Cink 1973) since Wolcott (1902) noted nests at West Point and Lincoln prior to 1902. In addition, an adult was feeding young in Sarpy Co 6 Jul 2003 (Mollhoff 2005a). Two nests were found near Hastings, Adams Co 23 May 2009, possibly dummy nests as no eggs were present and no female was sighted with the 2-3 males (Paul Dunbar, personal communication).

Additional early peak breeding season reports without documented breeding include sightings Jun-Aug each year since 1999 but without evidence of nesting at Boyer Chute NWR (Jerry Toll, personal communication), grasslands in Hall Co had “nesting” birds late May through Jul 2005 (Mollhoff 2005b), and one was reported on River Road, Phelps Co 12 Jun 2017. In 2018 there were three reports of possible breeding birds, all in Lancaster Co at three different locations 11-16 Jun. Singing birds occupied meadows at Wehrspann Lake, Sarpy Co, for two months prior to 25 Aug 2006; no evidence for breeding was observed other than territorial behavior. Westernmost of these early breeding season reports are from Keya Paha and Garfield Cos 15-24 Jun 2011, eight calling birds in Holt Co 18 Jun 2016, two westerly near Nenzel, Cherry Co 8 Jun 2022 and two mid-Jun records from Valentine NWR, Cherry Co: 18 Jun 2005 and 25 Jun 2009. The only Jun-early Jul records for the eastern Rainwater Basin are of two singing males 18 Jun 2003 at County Line WPA (Jorgensen 2004), a single bird at Flatsedge WMA 24 Jun 2005, one at Troester WPA, Hamilton Co, 3 Jul, and three singing males in Thayer Co 3 Jul 2015.

At one time, Sedge Wrens arriving from early Jul onwards were thought to be early fall migrants, but it is now understood that they represent a second breeding peak (late peak) following an intra-seasonal movement or migration, known as “intra-seasonal double breeding” (Robbins and Nyari 2014). Herkert et al (2020) remarked broadly about the species summer distribution in the Interior and stated that breeding occurs May-Sep, but that “breeding is concentrated in different portions of the range at different times of the season”. Nesting in May–Jun is mostly concentrated in north-central areas including Wisconsin, Minnesota, North Dakota, and Saskatchewan, but in the south and east, including Arkansas, Kansas, southern Illinois, Nebraska, and Missouri, nesting is frequently not initiated until Jul or Aug, or even Sep (Herkert et al 2020).

The phenomenon of intra-seasonal double breeding in Sedge Wrens has been well-studied in Nebraska (Lingle and Bedell 1989, Bedell 1996, Herkert et al 2020; see above). Bedell (1996) suggested that late summer breeding in Nebraska may involve bachelor males moving south from northern breeding areas in hopes that if conditions are unsuitable to the north then returning females may arrive and allow breeding with these bachelor males. It has been suggested (Joe Roller, personal communication) that migrants which pass through Nebraska northward in spring and are unsuccessful in locating suitable breeding habitat, or indeed successfully raise a first brood but mowing or other intrusions cause failure of a second brood, apparently return to Nebraska and breed in Jul and Aug (and even Sep in Kansas). According to Herkert et al (2020), these Jul-Aug nestings may represent re-nesting attempts by individuals arriving from elsewhere within their range, as suggested by Bedell (1996), or could be an adaptive response of local birds to delayed availability of moist but un-flooded grassland habitat, as suggested by Gibbs and Melvin (1992). Bedell’s (1996) hypothesis is possibly correct; coinciding with late midsummer arrival dates at many southerly breeding locations are (1) the late Jun-early Jul cessation of breeding at northern breeding areas such as Quebec; (2) beginning of departures from northern breeding areas such as northern Wisconsin (Temple and Carey 1987), and (3) a general shifting about in and out of nesting territories as reported in both Minnesota and Illinois (Herkert et al 2020).

Migration apparently begins in mid-Jul where breeding did not occur; Jul arrivals are birds that often if not usually attempt nesting (see Summer). True fall migration (after nesting) in this species probably takes place in Sep-Oct.

The only Panhandle report is of one calling and calls described by an experienced observer along Road 44 in extreme southeastern Garden Co 7 Aug 2020 (Mlodinow, eBird.org). The only reports in the west-central are of singles in Keith Co 9 Aug 2018 and 16 Sep 2017, and one in Hayes Co 10 Oct 2020. 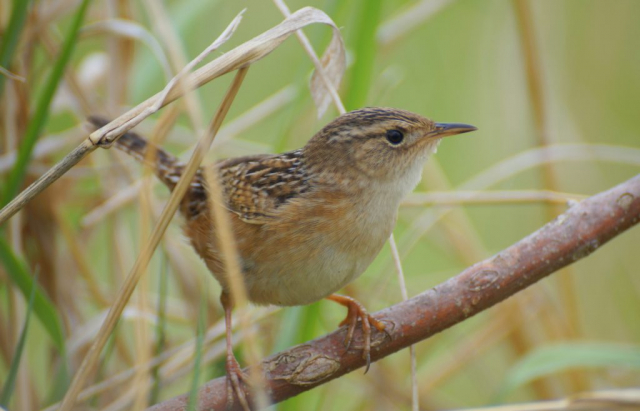 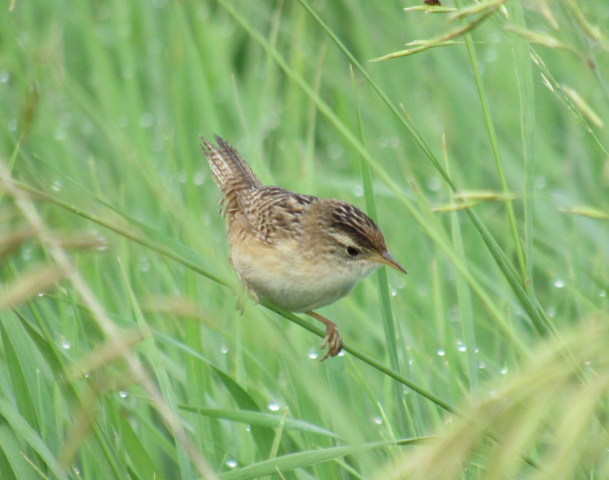