Taxonomy: Although no subspecies are recognized, bill and wing lengths exhibit a cline from longest in the east to shortest in the west (Hicklin and Gratto-Trevor 2020). Within this cline three breeding populations are distinguished, each with a characteristic migration route (Gratto-Trevor and Dickson 1994). In spring, migrants through Nebraska appear to include all populations, although few are likely to be from the Eastern Canadian (eastern) population. Of eight spring UNSM specimens, four are from the Alaskan (western) population, three are from the Central Canadian (central) population, and one, a female, by bill length of 21 mm, appears to be from the eastern population. One photographed at North Platte, Lincoln Co 9 May 2019 had been banded 22 Jun 2010 at the Canning River on Alaska’s Arctic Coastal Plain (pers. comm. Ben Lagasse), thus of the western population. In fall, the central and eastern populations migrate eastward to the Atlantic coast and so Nebraska migrants are of the western population; the absence of eastern and central birds results in reduced numbers compared with spring. All of the four UNSM fall specimens are of the western population. Results from a study using geolocators affixed to Semipalmated Sandpipers provide additional evidence that the majority of birds which migrate through Nebraska are from the Alaskan population (Manomet 2018)

Later dates of three or more are considered to be of migrants: 23 Jun 2020 (3) Clay Co. Additional later dates are discussed under Summer.

Migrants usually arrive mid-Apr and peak migration occurs in early May. Semipalmated Sandpipers are still common in late May, when flocks of Calidris sandpipers are dominated by this species and White-rumped Sandpipers. Higher densities apparently move through eastern sections of Nebraska, where the highest counts have been recorded in the eastern Rainwater Basin. West of Clay Co concentrations do not reach the same levels.

Early dates above are of three or more birds presumed to be migrants. Late Jun records are discussed under Summer.

Adults arrive in early Jul and tend not to remain for extended periods. Juveniles begin to outnumber adults by mid- to late Aug. Peak migration numbers occur during the latter half of Jul through the first week of Sep, accounting for nearly 75% of reports. Abundance is much reduced in fall relative to spring, no doubt a result of the absence of the central and eastern Canada populations (see Taxonomy). 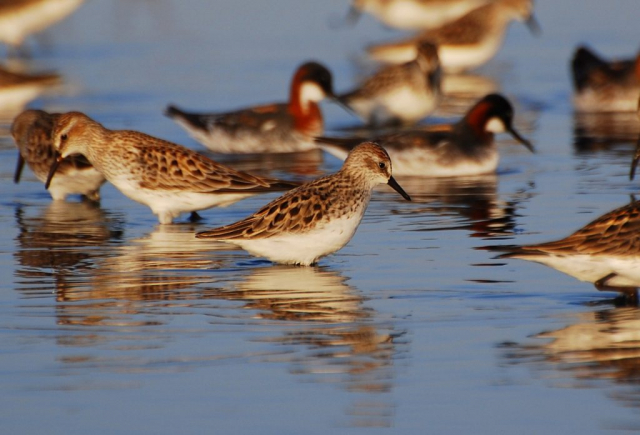 Manomet. 2018. The journey of the Semipalmated Sandpiper, accessed 9 March 2018.