Taxonomy: There are seven subspecies currently recognized throughout the Americas, two in North America, perobscurus of Queen Charlotte Is, British Columbia, and velox throughout Canada, United States, and most of Mexico (Gill and Donsker 2017).

Occurrence of perobscurus as a migrant in Nebraska is unlikely; Bildstein and Meyer (2020) note that it is only partly migratory, reaching Oregon and possibly farther south.

Summer: Evidence for breeding of this species in Nebraska is sparse. It is secretive during the breeding season and generally stays within the canopy of both coniferous and deciduous forest, making it difficult to locate.

The best evidence is from the central Niobrara River Valley and the Pine Ridge. Youngworth (1955) considered it a “resident in small numbers” in the central Niobrara River Valley, and Mossman and Brogie (1983) had several sightings of two breeding pairs and a possible third at three sites in the Niobrara Valley Preserve Apr-May 1982. One of the breeding pairs, both parents in immature plumages, had four eggs in Brown Co 6 Jun; young had fledged by 25 Aug (Mossman and Brogie 1983). One was at Fort Niobrara NWR, Cherry Co 21 Jun 2016, but its age class was not noted.

Evidence from the Pine Ridge is weaker but breeding probably occurs there (Rosche 1982). Mollhoff (2022) listed three nests with eggs from Sioux Co 30 May-10 Jul 1900-1901. Roger Sharpe (pers. comm.) secured a male with enlarged testes 19 Jun 1968 in typical ponderosa pine habitat at the head of Little Monroe Canyon, Sioux Co. A “possible nest” was reported from the Fort Robinson area 14 Jun 2006.

The only reports elsewhere are of an adult carrying food to a nest in Sherman Co in 1981 (Ducey 1988), and an apparently successful nesting in 1994 in northern Saunders Co, where a territorial pair was observed in spring through late Jun and an immature was heard 6 Aug (Silcock and Rosche 1994). An old record was of a nest with eggs near Ashland, Saunders Co 14 May 1895, one egg now #95576 at University of Kansas Biodiversity Unit, Lawrence, KS (Goss; Mollhoff 2022).

There are at least 42 reports Jun-10 Aug. Most are from southeast Nebraska; since there is only one documented breeding record in that area it is likely that many of these reports are mis-identified male Cooper’s Hawks, although some may be non-breeding one-year olds (Wheeler 2003).

Reports on early dates in fall are suspect due to presence in summer statewide of Cooper’s Hawks; small Cooper’s and large Sharp-shins can be difficult to separate. Migratory Sharp-shinned Hawks become noticeable in early Sep, with peak numbers from mid-Sep to mid-Oct. Data from the Hitchcock Hawk Watch, just across the Missouri River from Washington Co, Nebraska, show arrival in mid-Aug, and an average count per fall of 934 Sharp-shinned Hawks compared with only 240 Cooper’s Hawks (Hawkcount.org 2017).

Winter: Winter records are statewide, except for the treeless grasslands of the Sandhills. Reports are fewest in mid-Jan. Some individuals frequent urban neighborhoods during the winter, preying upon passerines that are attracted to bird feeders. CBC data 1990-2015 indicate a 1.7: 1 ratio of Sharp-shinned to Cooper’s. 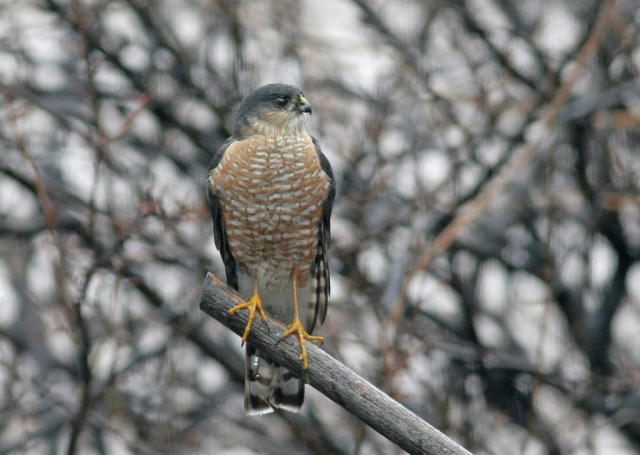 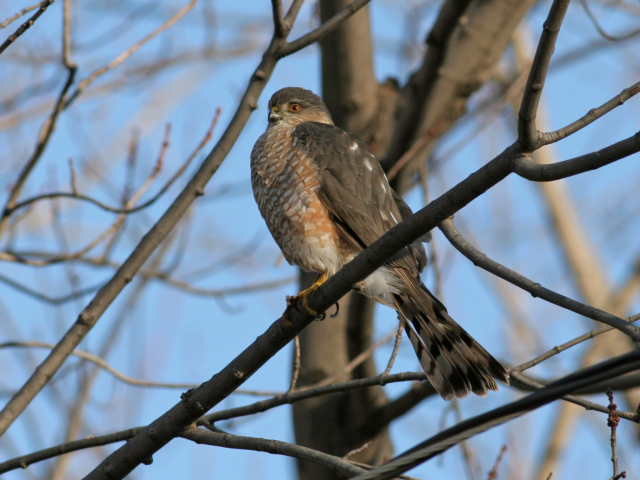