Resident: Hybrids with Greater Prairie-Chicken (T. cupido) are well-known (Mathisen and Mathisen 1959). Nebraska hybrid specimens UNSM ZM13554 and ZM13555 were collected 12 Feb 1959 in Loup Co and ZM13553 was collected Dec 1965 in Cherry Co. Hybrids have also been reported from Garden, Cherry, McPherson, Thomas, Hall, Knox, Keya Paha, and Rock Cos. These counties are in the central and eastern Sandhills, where both species occur. There was a report of a “possible hybrid” in southwest Lincoln Co by an experienced observer 12 Dec 2016, most likely suggestive of influence from north of the Platte River Valley.

Johnsgard and Wood (1968) suggested that hybridization occurred when numbers of each species were about equal, but it could be argued that the areas of overlap of the species’ ranges tend to be in peripheral habitat for each and overall numbers are low or there are few birds present on the lek of one of the two species, limiting choice of potential mates. Mixed leks in Loup and Knox Cos in 2005 had far fewer Sharp-tailed Grouse than Greater Prairie-Chickens (4:14 and 2:27 respectively; Mark Brogie, pers. comm.).

In Michigan, hybridization was noted to be a temporary phenomenon between these species, taking place when the two were rapidly undergoing a change in relative numbers as Sharp-tailed Grouse replaced Greater Prairie-Chicken (Ammann 1957). 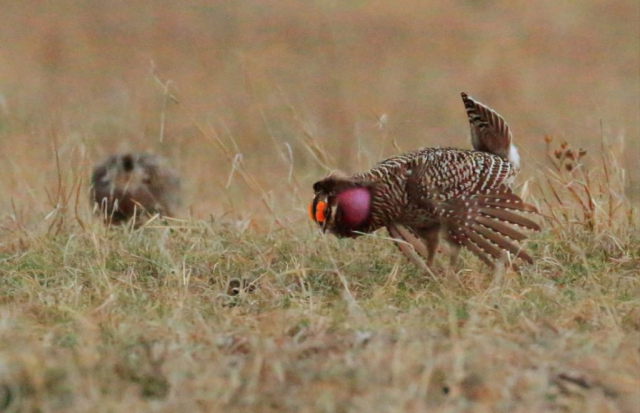 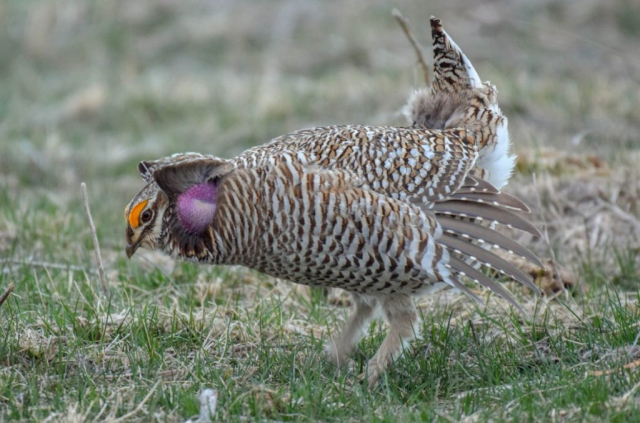 Johnsgard, P.A., and R. Wood. 1968. Distributional changes and interaction between Prairie Chickens and Sharp-Tailed Grouse in the Midwest. Wilson Bulletin 80: 173-188.