Taxonomy: There are three subspecies, caurinus of southern Alaska and southern Yukon (northwest Canada), hendersoni of eastern British Columbia to Quebec, and griseus of Quebec and Newfoundland (Gill and Donsker 2017). The breeding range of caurinus is separate from the other subspecies and its migration pathway is essentially restricted to the Pacific Coast region.  Subspecies hendersoni and griseus intergrade (Pyle 2008) where their ranges meet along the western shore of James Bay (Jehl et al 2020). Subspecies hendersoni migrates through the Interior and griseus through the eastern United States with some overlap in fall between griseus and hendersoni, mostly along the Atlantic Coast (O’Brien et al 2006).

All four specimens in the UNSM, including the specimen cited above, are, in our opinion, hendersoni, the subspecies expected in Nebraska (Jorgensen 1996). The only Nebraska record of the eastern subspecies griseus is of one photographed 3 May 1998 north of Bradshaw, York Co (Jorgensen 2004, Brogie 1999); the identity of a similar bird photographed in Clay Co 23-24 May 2005 was unclear. The subspecies griseus normally migrates along the Atlantic Coast and its status on the Great Plains is poorly understood. The possibility of intergrades between hendersoni and griseus could be a confounding factor as well.

Short-billed Dowitcher does not usually arrive in Nebraska until May; most of the records fall within the short period 9-20 May, and peak numbers occur 12-19 May. However, there are earlier reports supported by details of three on 16 Apr 2013 at North Platte, Lincoln Co, 20 Apr 1996 Knox Co (Jorgensen 1996), and 25 Apr Rainwater Basin (Jorgensen 2012).

Large flocks have not been reported in Nebraska. According to Jehl et al (2020), most Gulf Coast hendersoni follow the coasts to New Jersey, where they turn inland and fly direct to breeding grounds. Thus, there are only “a few stopping in the interior” (O’Brien et al 2006).

Jorgensen (1996) reviewed the status of this species in Nebraska and at that time found only nine documented records in addition to the specimen cited above.

Jorgensen (1996) cited 13 documented records, and 12 years later he found about 36 (Jorgensen 2012). Jorgensen (2012) also showed well-defined migration periods for adults and juveniles in the Rainwater Basin; twenty-one records of adults were in the period 9–28 July, and sixteen (76%) in the period 14–17 July. Fifteen reports of juveniles were during the period 16 Aug–11 Sep, 11 (73%) of these during the last ten days of August.

The earliest documented records in fall are of 3-6 at Conestoga Lake, Lancaster Co 3 Jul 2016, one recorded in Fillmore Co 4 Jul 2021, and three adults in the eastern Rainwater Basin 9 Jul 2000 (Jorgensen 2004). One was reported in Box Butte Co 29 Jun 2015 a very early fall date, although there is a documented record for Iowa 26 Jun 1988; a one-year-old non-breeder may account for this sighting.

The latest fall record of an adult is a specimen taken 28 Aug 1896, UNSM ZM15281, a surprisingly late date for an adult to be found in Nebraska. Most fall records are of juveniles; there are documented reports of juveniles in the period 11 Aug-20 Sep, all but one from central and eastern Nebraska. The exception was one at Lake McConaughy 19 Sep 2001.

Jorgensen (1996) discussed the probability that Interior adults in fall are males, as indicated by all available specimens; females are known to leave the breeding grounds as early as late Jun and are thought to travel directly to the Atlantic coast.

Although Short-billed Dowitcher would be the expected species in Jul, a few Long-billed Dowitchers have been noted in late Jul in recent years, thus all dowitchers seen in Jul-early Aug should be carefully identified. 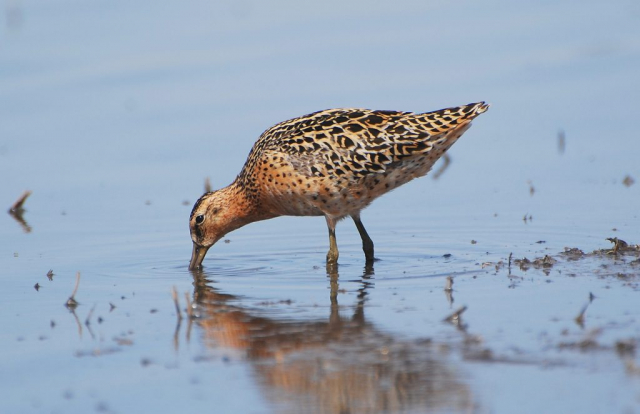