Taxonomy: Two subspecies are often recognized (AOU 1957, Gill and Donsker 2017), brewsteri of the Rocky Mountains westward and thula of the rest of North America. Pyle (2008) considers the species monotypic with brewsteri too poorly-differentiated to justify subspecific status.

Reports are distributed rather evenly from mid-Apr through mid-May. Interestingly, during the first 30 years of NOU record-keeping (1933-1963), nine of 12 total reports were from locations west of the 100th meridian, but during the second 30 years (1963-1993) only 17 of 54 records were from the west. The western reports may represent individuals associated with scattered breeding populations in southeastern Wyoming (Scott 1993) and northeastern Colorado where it was recorded nesting as early as 1937 (Andrews and Righter 1992). The increased frequency of spring sightings in eastern Nebraska since the 1970s is probably related to a population expansion northward on the Great Plains; prior to 1978 the Snowy Egret was considered a “rare post-season visitant” in South Dakota (Whitney et al 1978), but since the 1980s it has established breeding colonies at several eastern South Dakota locations (Tallman et al 2002) and mainly since the 1970s in Kansas (Thompson et al 2011).

Summer: The only confirmed record of breeding is of a flightless juvenile photographed on a nest at Crescent Lake NWR Jun 1989 (NGPC; Mollhoff 2008, 2022).

Other reports of possible breeding include a report of two adults that had been seen “repeatedly in the area during the early summer” with “an immature young” in Hall Co 26 Jun 1985 (Mollhoff 2001, 2008). We do not consider this report supportive evidence for nesting. Immature Snowy Egrets may arrive early as northward dispersers from southern breeding areas (below). There are two additional nesting reports, for Lancaster Co 1895 and Scottsbluff Co about 1900, the former in error and the latter without documentation. The Lancaster Co report (Eiche 1901) involved a female purportedly shot from a nest at Lincoln in Jun and placed in the Eiche collection (Bruner et al 1904); the Eiche specimens were included in the UNSM collection, where there is an immature (white) Little Blue Heron (ZM14585) also “said to be shot from a nest” (UNSM data) in Lincoln Jun 1895. Thus, the specimen appears to have been originally misidentified and the nesting report of Snowy Egret is thus in error and in fact attributable to Little Blue Heron (Thomas Labedz, pers. comm., Mollhoff 2022; see that species). No details have been published for a report of nesting in Scotts Bluff Co about 1900 (Bent 1926). This species breeds in mixed-species colonies in Kansas (Thompson et al 2011) and South Dakota (Tallman et al 2002).

Summer visitors occur in appropriate habitat statewide; sightings are fewest in late Jun and early Jul, although a total of 18 were reported Jun-Jul 2011, all in central Nebraska. Summer visitors sometimes remain in a location with suitable breeding habitat for up to several weeks, suggestive of potential breeding attempts.

Comments: Three specimens listed by Swenk (Notes Before 1925) were at one time in the Brooking collection but apparently are no longer extant. One of these, collected 2 Jun 1911 near Gibbon, was HMM 2682 and said to be photographed by Swenk, but neither it nor the photograph could be located. 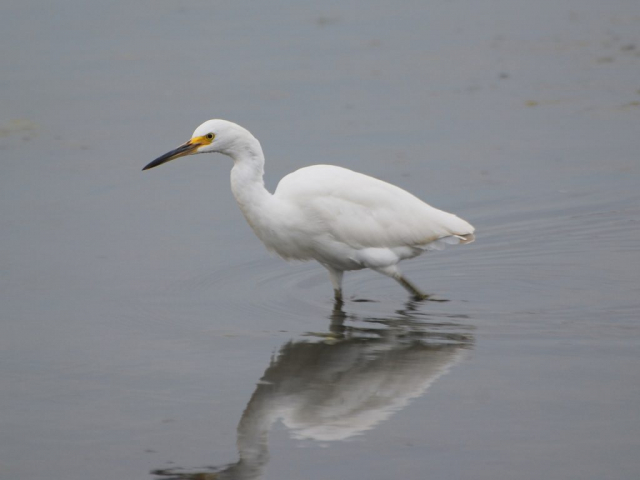 Eiche, A. 1901. Breeding of the Snowy Heron and Swallow-tailed Kite. Proceedings of Nebraska Ornithologists’ Union 2: 96.