Taxonomy: No subspecies are currently recognized.

The merging of Nyctea into Bubo was discussed by Banks et al (2003); some authors retain the monotypic genus Nyctea for this species (Weick 2006, Potapov and Sale 2012).

The winter 2011-2012 saw an historically unprecedented invasion of Snowy Owls, part of a continent-wide event (Holt et al 2015). The Nongame Bird Program at NGPC kept a detailed record of the birds as they were reported (Jorgensen et al 2012). The final tally was an amazing 200, of which 159 were confirmed (89 by photo, 29 carcasses, 41 credible observations or descriptions). First sighting was in Saline Co 8 Nov, followed by a flurry of reports 24 Nov through Jan. Reports were mostly in the east, with most westerly reports towards the end of the invasion. Most were solitary birds, but four were in close proximity in Harlan Co 22 Jan. Reports were still arriving at NGPC at around one per day by 1 Feb, but many of these later reports were of carcasses; a strong snowfall over much of Nebraska around 4 Feb may have led to the demise of many of the survivors, as almost no reports were made subsequently. The last live bird reported was a white individual photographed at Crescent Lake NWR, Garden Co 16 Feb 2012.

Numbers may be larger each year than reported as there are vast areas of northern Nebraska which are difficult to access in winter. Reports are statewide, but fewer in the south.

Comments: This species has a tendency to wander southward in most years in varying numbers. Recent studies have shown that some of these birds return to southern wintering locations in subsequent years, thus undergoing a true migration (Cirino 2017). Occasionally invasions occur such as during the winters of 1917-18, 1954-55, and 2011-12 (Jorgensen et al 2012). The reasons are unclear, but, since most irruptive birds are young-of-the-year, productive breeding in years of high lemming (Dicrostonyx, Lemmus) populations may enlarge the population beyond carrying capacity (Holt et al 2020).

Interestingly, most Nebraska records are near larger water bodies, including lakes and rivers. An investigation of the stomach contents of two Nebraska Snowy Owls collected by large bodies of water at Harlan County Reservoir and Lake Wanahoo in Saunders Co found parts of a Northern Pintail and a Snow Goose (Valenziano and Labedz 2014). In Fremont County, Iowa, across the Missouri River from Nebraska, two Snowy Owls were seen harassing a Mallard (Keith Dyche, personal communication), and hunters in western Douglas Co, Nebraska watched a Snowy Owl pick up a fallen Mallard around 300 yards from their blind in Dec 2022 (Eric Bents, pers. comm.). On the other hand, an interesting case was that of a Snowy Owl that for about a month was seen hunting the corners of a busy Douglas Co intersection 2 Jan-4 Feb 2018 (last date Val Kollath, personal communication); its pellet was analyzed by Schwartz and Carlini (https://ebird.org/view/checklist/S42387778) and was found to contain remains of voles (Microtus sp.) as the only dietary component. This was likely an opportunistic behavior by an owl that discovered a plentiful food source and supports the idea that Snowy Owls in Nebraska will “eat whatever is available, dead or alive” (Holt et al 2020). 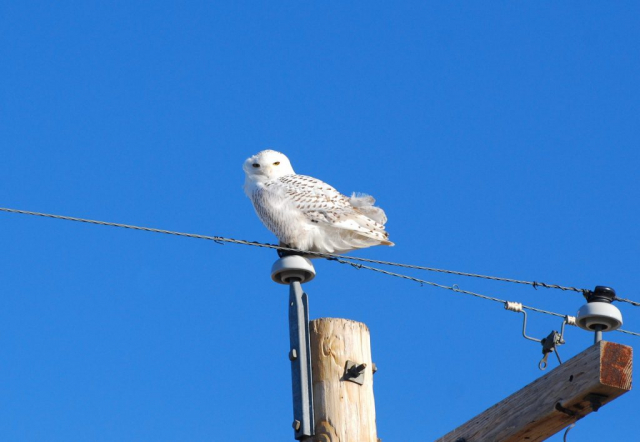