This species primarily occurs in spring and almost all reports during this season are in May, suggesting a pattern of dispersal or prospecting away from regular breeding sites south of Nebraska; Snowy Plovers breed regularly as close as central Kansas (Thompson et al 2011). Most sightings in Nebraska are relatively brief (<3 days) and are at sites that do not possess the full complement of conditions suitable for nesting (e.g., Rainwater Basin wetlands). However regular breeding sites have been known in recent years (see Summer).

Increased birding activity in the Rainwater Basin during the 1990s and 2000s has produced most of the documented records, usually of single individuals; Jorgensen (2012) and Dinsmore (1996) together listed 35 records there 22 Apr-30 May.

Summer: Occurrence in summer in Nebraska is peripheral, but there are a number of records, most at Lake McConaughy during periods of low water levels in the early 2000s, and from the northeast in the upper reaches of Lewis and Clark Lake and along the Gavin’s Point reach of the Missouri River. There are also a few records from the central Platte River Valley and Harlan Co Reservoir, Harlan Co.

The first recorded breeding was in northeastern Nebraska. A nest with three eggs, attended by two adults, was found adjacent to the Missouri River near Santee, Knox Co 10 Jun 1998, but later destroyed by high water (Pavelka; Mollhoff 2001). A pair was with breeding Piping Plovers near Niobrara Jun 1999, but no nest was found (Mollhoff 2001), and a single bird was below Gavin’s Point Dam May 2000 (Mollhoff 2001). In the years since, nesting Snowy Plovers have been found on man-made sandbars near the Niobrara River delta; as many as 10 nests have been located there 2008-2011 (Hunt et al 2013) and 2010-2019 (Galen Jons, pers. comm.). Single three-egg nests were initiated 18-22 Jun within 1800 feet of each other on the same Niobrara River delta sandbar in the three years 2016-2018 (Galen Jons, pers. comm.), suggesting the same breeding pair was involved. Two nests were found on the South Dakota side of the Lewis & Clark Lake delta in 2020; both were successful (Chantel Hofer, pers. comm.). Productivity has been comparable to that of Snowy Plovers elsewhere in the North American breeding range, with inundation and predation the main threats (Hunt et al 2013).

Summer reports began at Lake McConaughy during periods of low water and exposed sandy beaches in the early 1990s: 3-4 Jun 1991 (Peyton 1991), 4 Jun-22 Jul 1992 (Rosche 1994), and 1 Jun 1993 (Rosche 1994). Nesting was first noted in 2000, when an adult with a small chick was on the south shore 3 Jul 2000; an adult had been there two weeks earlier. An adult female with three young about three weeks old was seen on the south shore 10 Aug 2001, where a female had been found 21 Jul. In 2002, 1-2 were present 12 Jun-6 Aug, but nesting was not observed. Beginning in 2003, nests were monitored by Central Nebraska Public Power and Irrigation District; two males and a female and a nest containing three eggs were found on the north shore 16 May 2003 and two pairs were at the same location with four juveniles present 21 Jul. Nesting of Snowy Plovers at Lake McConaughy in 2004 and 2005 was summarized by Peyton and Wilson (2005). For those two years, nine nests and 19 broods were monitored, with six of the nests hatching at least one young and 32 of 35 chicks fledging. During the two years 2004 and 2005, first sightings of adults were 28 May and 24 May respectively, first nests 6 Jun and 24 May, and first fledging 15 Jul and 20 Jul (Peyton and Wilson 2005). An adult male and two juveniles were found 29-30 Jul 2006. In 2007, four nests were located and nine chicks fledged even though water levels rose during the year (Peyton and Wilson 2007). Only two were present there 9 Jun 2008 and only one nest was located that year (Peyton and Wilson 2008). Two of the eggs hatched but the fate of the chicks was not determined (Peyton and Wilson 2008). In 2013 water levels were again relatively low; four adults and one brood were present during the season (Stephen J. Dinsmore, pers. comm.). In 2015 and 2016, Snowy Plovers were observed at Lake McConaughy but no nests were located (Peyton and Wilson 2016). Since 2004, Snowy Plovers are known to have nested in seven years and a total of 29 nests and 22 fledged chicks have been observed (Zorn and Wilson 2016).

Breeding behavior has been reported at three locations in the Central Platte River Valley. The Dinan Memorial Tract, a mechanically cleared and modified area along the Platte River in eastern Buffalo Co, hosted two nests in 2007, with one young fledged; a pair of Snowy Plovers and a nest were observed in both 2008 and 2009 with chicks fledged there during 2009, and in 2010, three adults were found but no nests were located (Baasch 2010, 2011). Ostrom et al (2020) documented the presence of up to four 14-23 May 2019 at a site about 10 mi southwest of Grand Island, Hall Co. Construction of nest scrapes and copulation were observed 23 May, but rising water levels inundated the site by 27 May (Ostrom et al 2020). A previously unreported nesting occurred near Newark, Kearney Co where a pair brooded a nest with three eggs 6 Jun-3 Jul 2019 about two km north of the main channel at a sandpit site; the attempt was “ultimately unsuccessful” however (K. Mohlman, fide Ostrom et al 2020).

Four juveniles accompanied by an adult at a drawn-down Swanson Reservoir, Hitchcock Co on the rather late date of 25 Aug 2014 may have been the result of local breeding; these birds were last seen 3 Sep.

Fall: There are seven reports, all in the period 4 Aug-21 Sep. The Swanson Reservoir sightings are discussed above (see Summer). 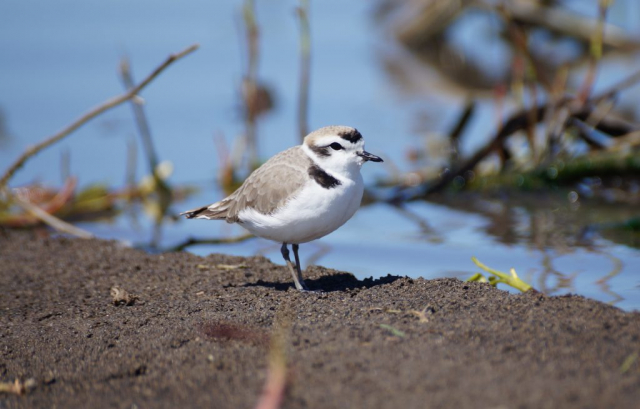