Taxonomy: There are two subspecies, cinnamomea of Alaska and western Canada and solitaria of eastern British Columbia to Labrador (Gill and Donsker 2017).

Both subspecies occur in Nebraska, although field observers should be aware that fall juveniles, studied at close range, are the only individuals that can be reliably identified to subspecies in the field (Paulson 1993). Swenk and Fichter (1942) examined 10 Nebraska specimens and found that both eastern solitaria, and western cinnamomea were represented (five specimens of each). Each subspecies occurred statewide. Data gathered by Jon King (personal communication) suggests that a broad area centered on central or east-central Kansas is the area where equal numbers of each subspecies occurs. However, in Colorado cinnamomea outnumbers solitaria at least 50:1, and in Missouri most all birds are solitaria.

This species does not usually arrive until the latter half of Apr and peak migration occurs during the first half of May.

Adults arrive by the end of Jun and are present through Jul; peak numbers occur in the second half of Jul. Juveniles arrive in mid-Aug and tend to outnumber adults shortly thereafter. Most have moved south by mid- to late Sep.

Juveniles of solitaria were noted in eastern Nebraska late Aug 1996 and of cinnamomea in early Sep.

Comments: There are no breeding records for Solitary Sandpiper for Nebraska, a conclusion reached by Swenk and Fichter (1942) based on a lack of evidence in support of earlier reports suggesting breeding (Taylor 1988, Bruner 1901, Bruner et al 1904). A set of two eggs collected 1 Jun 1897 by W. C. Smith near Long Pine, Brown Co and now #34 at Sellors-Barton Museum, Ainsworth, Brown Co is labelled “Solitary Tattler”; measurements and study by Mollhoff (2022) concluded the eggs were those of Spotted Sandpiper. 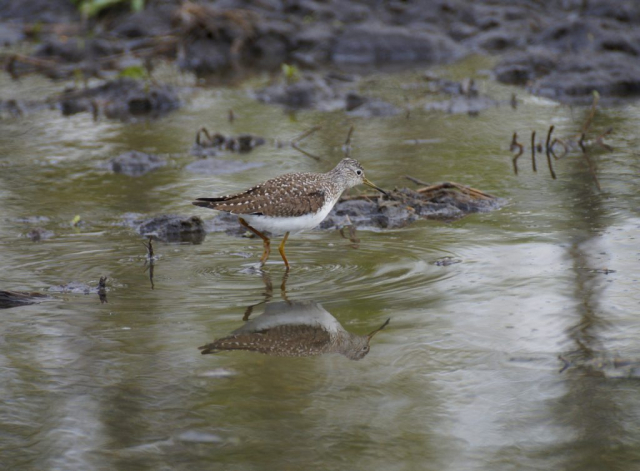 Taylor, W.E. 1988. A catalogue of Nebraska birds arranged according to the checklist of the American Ornithological Union. Annual Report of the Nebraska State Board of Agriculture for 1887 pp 111-118. State Journal Co., Lincoln, NE.