Taxonomy: As many as 52 subspecies have been named, but current authors recognize 24 (Arcese et al 2020, Gill and Donsker 2017), 25 (Patten and Pruett 2009, Clements et al 2016), or 39 (Pyle 1997). Arcese et al (2020) divided the 24 subspecies they recognized into five groups, only one of which, their “Great Basin to Eastern North America” group, contains subspecies likely to occur in Nebraska. This group, referred to as “Chocolate Song Sparrows” by Wright (2019), has the following subspecies: melodia (including juddi and euphonia), breeding throughout the eastern part of the species’ range, except parts of the mid-Atlantic Coast, west through the Great Plains and Prairie Provinces, wintering in the southeast USA south to Florida, atlantica, breeding in Atlantic Coast salt marshes from New York south, and montana, breeding throughout the Rocky Mountains and Great Basin regions from southeast Washington east to north-central Montana and south to eastern California and northern New Mexico, with many individuals resident, but northernmost birds migrating south to Baja California and Sonora in winter.

Two subspecies were listed by AOU (1957) as breeding in Nebraska: eastern euphonia in the Missouri Valley and northern juddi along the northern edge of the state. As outlined above, Arcese et al (2020) merge both euphonia and juddi into eastern melodia, considering the differences between the three merely clinal. A specimen (UNSM ZM 13070) collected by Cink (1975) in Lancaster Co was found by R.B. Payne to be indistinguishable from a series of juddi at the University of Michigan Museum of Zoology; Cink concluded that the recent arrival of Song Sparrows in Lancaster Co may have been be due to a southward spread of juddi rather than westward spread of euphonia. Presumably the increasing number of Song Sparrows summering in most of Nebraska away from the north and east are melodia/juddi also, but there is no information available. In Wyoming, Song Sparrows on the eastern plains are melodia (Faulkner 2010, sensu Arcese et al 2020), and so those breeding on the northeastern Colorado plains (Andrews and Righter 1992) are presumably melodia as well. Most of western Nebraska has previously had few if any breeding Song Sparrows until recently (see Summer).

Subspecies montana breeds in the mountains of Wyoming and Colorado and occurs in low numbers as a migrant in the Panhandle, where Bent (1968) stated it occurs “Casually in migration east to Crawford”. Rosche (1994) stated that the “only known habitat in western Nebraska with summering Song Sparrows” was at Oliver Reservoir, Kimball Co; these Kimball Co breeders at Rosche’s time were probably the western subspecies montana (Dunn and Alderfer 2017). There are five records for Kimball Co 15 May-5 Jun, including one described as “entirely rufous “western” looking bird” (T.J. Walker, eBird.org). Subspecies montana tends to be more reddish than melodia (Pyle 1997); there have been several westerly Nebraska reports of probable montana. One photographed at Sutherland Reservoir, Lincoln Co 21 Nov 2020 (Sam Manning, eBird.org) was tentatively identified as this subspecies; the identification was confirmed from the photographs by Steven Mlodinow. As many as five were at Lake Ogallala, Keith Co 9 Jan 2021 Caleb Strand, photos; eBird.org), and one was photographed in Dawes Co 5 Sep 2021 (Sam Manning, eBird.org). Rosche (1982) stated that “very dark reddish-brown birds” occur occasionally during fall migration in the northwest, presumably of “northwestern” races. Three birds which were “dark chestnut with gray napes” were at Cochran Lake, Scotts Bluff Co, 27 Oct 1996; they may have been examples of montana as may have been one near Fort Robinson SHP, Dawes Co 12 Oct 2004 that was “reddish with gray coloration”. One in a Lincoln Co yard 24 Apr 2016 was described as “reddish”.

Subspecies rufina breeds in southeast Alaska and Queen Charlotte Islands and “some birds move south in winter” (Arcese et al 2020), albeit mostly to the Pacific Coast as far south as northern California (Wright 2019) and thus unlikely to occur in Nebraska. Nevertheless, two have been identified in northeastern Colorado, 29 Apr 2016 and 13 Nov 2016 (eBird.org, accessed October 2017), the only records east of the Rocky Mountains. These birds were strongly rufous, with a buffy wash on lower flanks, heavy russet breast streaking, and some white on the throat. It is possible these northeastern Colorado birds were of the “Rusty Song Sparrow” group sensu Wright (2019), subspecies merrilli, which breeds as far east as central Montana, where its range meets that of montana (Wright 2019).

There is a specimen UNSM ZM7540 (wing 69 mm, tail 76 mm) collected 23 Oct 1890 at Lincoln, Lancaster Co that was identified as an example of fallax, a subspecies with a confusing taxonomic history but currently understood to be resident in southwest Utah and southeast Nevada (Rising 1996; Byers et al 1995, Arcese et al 2020). The range ascribed to it by Baird in his original description included a mix of the currently-understood ranges of fallax and the at-the-time unnamed montana (Arcese et al 2020). Despite the large tail length measurement (76 mm) of the UNSM fallax specimen, we believe this is a long-tailed example of montana, whose tail length reaches 75 mm (Pyle 1997).

The identity of Song Sparrows wintering in Nebraska is conjectural; all subspecies discussed above (melodia/juddi/euphonia, montana/merrilli, and rufina are possible (Bent 1968, Rapp et al 1958). As noted by Wright (2019), however: “… like all non-insular, non-sedentary Song Sparrows, [none] should be identified with certainty in the field away from the core of the breeding areas.” It is also possible that some Nebraska summering birds are resident, particularly juddi, which is at the southern edge of its breeding range in Nebraska.

Spring: Song Sparrow occurs statewide during migration, although it is uncommon westward (Rosche 1994). Arrival and departure dates are difficult to determine due to the presence of wintering and summering birds. Examination of available data suggests however that spring migration is in progress by mid-Mar and is essentially concluded around the end of Apr. The last migrant at Box Butte Reservoir, Dawes Co was noted 5 May 1994 (Rosche 1994). First singing birds in 2012 were in Hamilton Co 11 Mar and at Fontenelle Forest, Sarpy Co 14 Mar, and in 2021 11 Mar in Stanton Co.

Summer: Available evidence suggests that breeding is a relatively recent phenomenon in Nebraska. Bruner et al (1904) speculated that “a few breed, especially in northern Nebraska,” although no evidence was provided. AOU (1957) stated that subspecies juddi bred in extreme northern Nebraska, citing as locations Sioux County and Dakota City; Sharpe (1967) found a nest with three young Song Sparrows in Sowbelly Canyon, Sioux Co 18 Jun 1966. Unfortunately, this juvenile was not identified to subspecies (Cink 1975). Rapp et al (1958) made no mention of breeding, describing Song Sparrow as a “common migrant and winter resident throughout the state”. The first indication of nesting was made by Wood (1965), who found a nest near Plattsmouth; the nest was not conclusively identified as that of a Song Sparrow, however, and may have been that of a Brown Thrasher (Cink 1975). At about the same time an apparently isolated group of summering Song Sparrows was found in the Platte River Valley in Polk Co in 1956 and 1957 by Short (1961). Breeding was first documented in 1972 with a nest and young at Wagon Train Lake, Lancaster Co by Cink (1975), who suggested that Song Sparrow was increasing its range as a breeding bird at least partially as a result of the establishment of reservoirs and irrigation infrastructure. Song Sparrows reported on BBS routes 1967-77 were virtually restricted to the east and north, with 86% of the birds in those areas.  In following years, a nest with eggs was found in Johnson Co 14 May 1981 (Ducey; Mollhoff 2022) and a nest with young in Hall Co 7 Jun 2005 (Mollhoff 2022).

Mollhoff (2001) showed summer distribution essentially restricted to the east and east-central, but by 2011 (Mollhoff 2016), the range had continued to expand westward by about 100 miles, with reports west to the east edge of the Panhandle. These breeding bird atlas data suggest a westward range expansion, rather than a north-south one as suggested by the presence of juddi Song Sparrows in Lancaster Co (Cink 1975). By 2006, it was “abundant” along the Platte River in Lincoln Co. An “apparent juvenile” was netted at Lake Ogallala, Keith Co 26 Jun 2000 (Brown and Brown 2001). BBS trend analysis shows Song Sparrows have increased 5.36% (95 C.I.; 3.67, 7.06) statewide 1966-2015 (Sauer et al 2017).

Fall: Migrants become apparent in early Aug and decline in numbers by late Nov. Before the species became a breeder in the Keith Co area, Rosche (1994) listed an early fall date of 8 Aug. The 40 in Hamilton Co 14 Aug 2011 were probably early migrants. Earlier Aug dates are suggestive of breeding (see Summer). 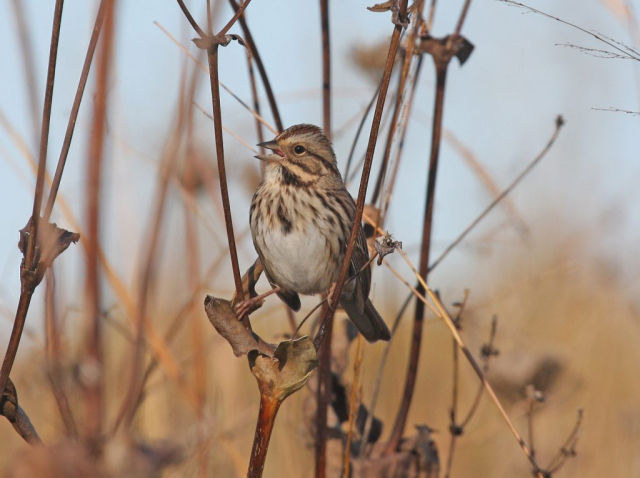 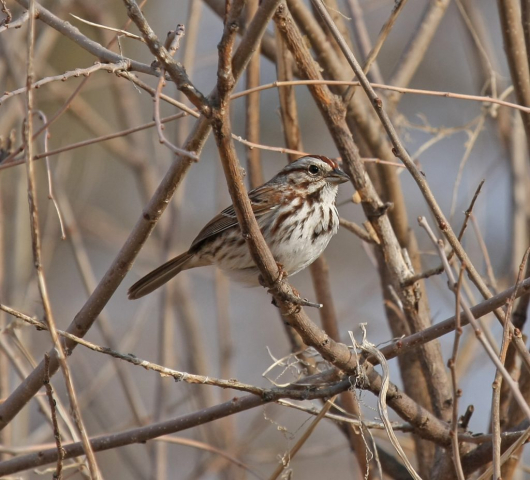 Byers, C., J. Curson, and U. Olsson. 1995. Sparrows and Buntings. A guide to the sparrows and buntings of North America and the World. Houghton Mifflin Company, Boston, Massachusetts, USA.

Patten, M.A., and C.L. Pruett. 2009. The Song Sparrow, Melospiza melodia, as a ring species: patterns of geographic variation, a revision of subspecies, and implications for speciation. Systematics and Biodiversity 7.1: 33-62.