Summer: Breeding is generally confined to major wetland complexes; the highest breeding densities traditionally have been believed to occur in the Sandhills (Sharpe et al 2001). Breeding numbers at Crescent Lake NWR, Garden Co were estimated at 2500 in early Jun 1978 (Williams 1979) and about 1000 in early Jun 1979 (Fred Zeillemaker, personal communication). However, surveys conducted in 2016-2017 in the Sandhills and Rainwater Basin (Dinan et al 2018, Jorgensen et al 2022), detected a total of only 47 Soras in the Sandhills during call-broadcast surveys in 2016-2017. During the same study, 171 Soras were detected in the Rainwater Basin. However, lower numbers were found in Rainwater Basin surveys in 2021, yielding 22 at eight sites 2 Jul.

Jorgensen et al (2022) found that Virginia Rail and Sora had opposite detections in the Sandhills and Rainwater Basin; significantly larger numbers of Virginia Rail occur in the Sandhills, but Sora is more numerous in the Rainwater Basin. Jorgensen et al (2022), noting that the two species have different diets, Virginia Rail preferring an insect diet and Sora preferring seeds, suggested that annual plants such as Smartweeds (Polygonum spp.) may be more plentiful in the Rainwater Basin as a result of more dynamic wetlands and moist soil management practices specifically intended to increase seed food resources for migratory waterfowl. Likely higher levels of agricultural chemicals in Rainwater Basin wetlands occur due to runoff; in particular, neonicotinoids are likely present, which negatively impact invertebrates and thus reduce that food source for Virginia Rail (Jorgensen et al 2022).

Results from Jorgensen et al (2022) update Jorgensen (2012), who considered Sora to be a “rare summer visitor, casual summer resident” in the Rainwater Basin. Although other authors (for example Johnsgard 1979), have included the Rainwater Basin as part of the breeding range, prior to the study by Dinan et al (2018) there had been no actual nests reported. The only nest that has been found is one at Kissinger Basin WMA, Clay Co 17 May 2017 during the aforementioned studies (Dinan et al 2018, Jorgensen et al 2022). Prior to this study, there were only about eight Rainwater Basin summer reports in the period 24 Jun-5 Jul. Reports after these dates, when the species can become quite common, are more numerous but presumably include migrants (see Fall). In 1982, Morris (1983) reported from Polk Co “we had unusually large numbers of Soras spend the summer this year…I’m sure they were nesting in the roadside ditches”. Nesting was reported as “probable” at the Benedict BBA Block and “possible” at the McCool Junction Block, both in York Co (Mollhoff 2001).

Breeding numbers elsewhere in the east appear to have declined, except perhaps in the northeast in Knox and Dakota Cos; one in Antelope Co 7 Jul 2021 may have been an early fall migrant. A juvenile was photographed in central Knox Co 26 Aug 2018. Bruner et al (1904) considered Sora a common breeder in the east, but the only recent records from Missouri River counties suggestive of breeding are from Dakota Co: 6 Jun 1983, 3 Jun 1986, Jun-Jul 1987, and 12 Jun 1993, as well as a report of several juveniles there 26 Sep 2002, although these were probably more likely migrants. Breeding has occurred on occasion in Lancaster Co, with reports in 1973 and 1981 (Bennett 1974, 1982) and the finding of an abandoned egg at Jack Sinn WMA, Lancaster Co 9 Jun 2007. One was at Lincoln Saline Wetlands Nature Park, Lancaster Co 29 Jun 2016. Only one Sora was detected in the eastern saline wetlands of northern Lancaster and southern Saunders Cos (Dinan et al 2018). There are additional nesting season reports in the Missouri River Valley from Cass Co 18 Jun 1999 and Douglas-Sarpy Cos Jun-Jul 1968.

While there are at least five nesting season reports for Jun from Scotts Bluff Co, there is only one from the southern Panhandle or the southwest, one at Oliver Reservoir, Kimball Co 28 Jun 2021. A recent report was of a nest that fledged three young near Cairo, Hall Co; it was studied 31 Jul-24 Aug 2008 (Lemburg 2012).

Migrants and dispersing birds may be on the move by mid-late Jul (Johnson and Dinsmore 1985); examples are three at Memphis Lake SRA, Saunders Co 11 Jul 2021, nine in non-breeding habitat, a flooded field, in Box Butte Co 12 Jul 2015, four at an eastern Rainwater Basin wetland 12 Jul 2003 that had been dry three weeks prior, and one in Douglas Co 17 Jul 2016. Soras were “common, ubiquitous” in the Rainwater Basin 19 Jul 2015, although at least some of these may have bred there, given the high-water levels at the time.

Peak movement is mid-Aug and early Sep, after which reports decline markedly. There was a post-breeding estimate of 5000 at Crescent Lake NWR in 1977 that “boggles the mind” (Williams 1978), and in 1978 about 4000 were estimated to be present in early Sep, but nearly all had departed by 14 Sep (Williams 1979). 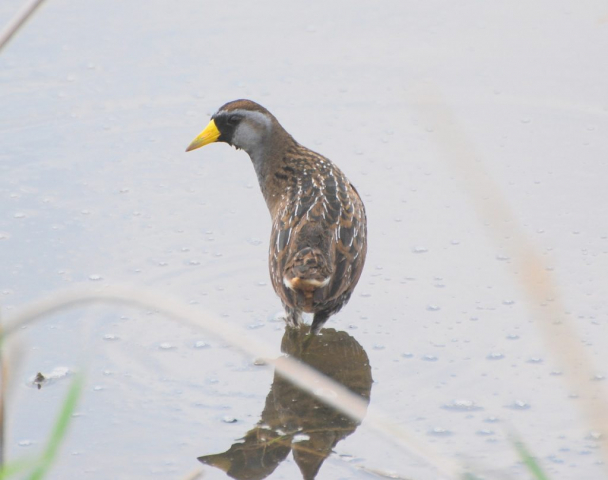