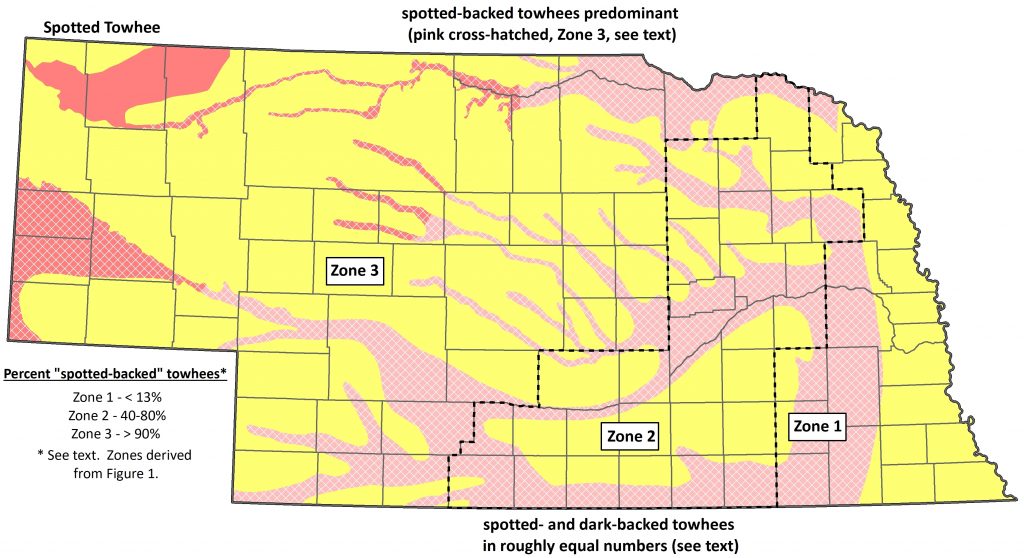 Taxonomy: There are 19 subspecies currently recognized (AOU 1957, Pyle 1997, Gill and Donsker 2017), 10 in Mexico and Central America. The other nine occur north of Mexico and are often divided into two groups, Coastal, including four subspecies limited in distribution to the Pacific Coast from British Columbia southward, and Interior, including five subspecies: falcinellus, resident in southern Oregon to central California, curtatus, breeding in interior southwest Canada and interior northwest USA and wintering to southern California and southern Arizona, montanus, breeding in southwest USA and northern Mexico and wintering to southwest Texas, arcticus, breeding from central Alberta, central Saskatchewan, and central North Dakota, south, east of the Rocky Mountains, to southeastern Wyoming, northeast Colorado, and central northern Nebraska, wintering to southwest New Mexico and south Texas, and gaigei, resident in southeast New Mexico and west Texas.

There is but a single specimen record of montanus that was taken 5 Oct 1915 at North Platte, Lincoln Co; the remains were “badly decomposed” but parts were submitted to H. C. Oberholser, who confirmed that the bird was indeed montanus (Swenk 1918, Tout 1947). Subspecies montanus has been recorded in Morton Co, Kansas (Johnston 1965, AOU 1957), is at least partly migratory, and, although its breeding range is mostly west and south of Nebraska (Bartos Smith and Greenlaw 2020), it includes the Front Range of Colorado, where it is “very common” (Steven Mlodinow, personal communication). In northeastern Colorado, along the South Platte River, both arcticus and montanus have been reported, along with a large number of hybrids/intergrades, notably at Tamarack WMA in Logan Co (Steven Mlodinow, personal communication). Nevertheless, approximately 80% of the Colorado Spotted Towhees in Logan and Sedgwick Cos are montanus (Steven Mlodinow, personal communication) and so its occurrence in Nebraska would not be unexpected. Recently, Mlodinow found that during migration a “goodly percentage” of the Spotted Towhees at Oliver Reservoir, Kimball Co, Nebraska were montanus, including one there 13 Apr 2019 (eBird.org, where entered as “maculatus group”), but none were found in the North Platte River Valley, where only arcticus occurred in Scotts Bluff Co and at Ash Hollow SHP, Garden Co. There is a surprisingly northerly Nebraska record of two “maculatus group” birds on East Ash Creek, Dawes Co 14 May 2019 (Mlodinow, Remsen; numerous photos; eBird.org); likely the same two were there 15 Jun 2019. As a note of caution, Mlodinow (personal communication) stated: “The NE breeding SPTO have more/larger spots above and more extensive white below the tail (on folded tail, white nearly reaching tip of under tail coverts) compared with CO SPTO. Being subspecies, it is unclear how much variation each taxon would entail, so I typically only [identify] those that seem distinctive and that I can photograph. I am impressed by how much the two populations differ as a whole.” Mlodinow found another montanus at Wildcat Hills NC, Scotts Bluff Co 30 Jul 2019 (eBird.org, photo), and three at Carter Canyon, Scotts Bluff Co 23 Jun 2022 (eBird.org).

In this account, and that of Eastern Towhee, we use the terms “spotted-backed” and “dark-backed” for the phenotypes occurring in Nebraska. As shown in Figure 1, there is considerable overlap of these two phenotypes in the state. A recent study (Silcock, unpublished data) based on reports to eBird (eBird.org) of phenotypic Spotted and Eastern Towhees showed that >90% of towhees in the western two-thirds of the state were reported as Spotted, and >87% of the reports along the east edge of the state as Eastern, with an “overlap zone” where the two were reported in roughly equal numbers (see Figure 1). Because of the overlap of the two phenotypes, it has generally been assumed that “spotted-backed” towhees with reduced spotting that occur in the same general areas as “dark-backed” towhees are introgressants. The studies by Sibley and West (1959) and Short (1961), which have been interpreted as showing that assortative mating retained some 56% of towhees in the overlap areas as phenotypic Spotted or Eastern Towhees, along with genetic data (Ball and Avise 1992) showing the absence of shared haplotypes in samples from western and eastern extremes of the North American range (Washington, South Carolina, Georgia), were the basis for separating the former Rufous-sided Towhee into Spotted and Eastern Towhees (Banks et al 1995, Bartos Smith and Greenlaw 2020, Greenlaw 2020).

Nevertheless, in the absence of genetic studies, it is unknown what proportion, if any, of “spotted-backed” towhees reported to eBird as Spotted Towhees might be introgressants, a point noted by Scharf (2005), who focused on phenotypic Eastern Towhees in his study because birds with any degree of white spotting on their upperparts were likely to be of indeterminate genotype. If Spotted and Eastern Towhees are “good” species, genetically distinct, interbreeding would be expected to be minimal, and mitigated against by assortative mating in areas of overlap. Sibley and West (1959) suggested that one factor leading to assortative mating might be correlation of degree of back spotting pattern with climatic differences, in particular the amount of shade in towhee habitat (more in eastern forests than in western open brush). In this context, Walsh et al (2020), in a study of hybridization between Bullock’s and Baltimore Orioles in Nebraska, found that hybrid zone width estimates differed between genomic and plumage data, the latter more narrow, and suggested that one explanation might be that selection pressure could be stronger on phenotypic traits. Anecdotal information supporting this theory was provided by T. J. Walker (personal communication), who observed that in his southeastern Lincoln County, Nebraska survey area “I have noted for years that the [Spotted Towhee] songs vary quite a bit – in areas with more deciduous woodland and cedar coverage most of the songs, while still typical of Spotted, have a little hint of “Eastern” to them. In the areas of the canyons with very little woodland, where the landscape is mostly grassland with shrub thickets the songs are quite “dry” and clearly Spotted.” Similarly, in 2020 two southeasterly reports of Spotted Towhees were from a prairie and a golf course, both in Saunders Co. These considerations raise the possibility that towhees of apparent intermediate plumages and songs are not necessarily (genetic) introgressants, but might include individuals of sub-populations distributed regionally that have adapted over time to local environmental conditions. If this is true, and introgressants occur in relatively low numbers, the distribution across Nebraska of the degree of back and wing spotting and wing patch extent would be expected to be clinal in both species, reflecting local environmental conditions while maintaining genetic integrity of Spotted and Eastern Towhees. Since songs are learned in these species, mixed songs are to be expected in areas of overlap. Although Sibley and West (1959) pointed out that contact between Spotted and Eastern Towhees in Nebraska was not on a broad front but limited to riparian corridors and surmised that this resulted in “greatly restricted” gene flow, the latter is likely to be largely a consequence of assortative mating, as suggested by these same authors.

In recent years there have been several documented reports in Nebraska of towhees resembling phenotypic Spotted or Eastern Towhees far from their respective expected summer ranges.

In Scotts Bluff County there were six reports of up to six birds at four locations of phenotypic Eastern Towhees in summers 2013-2017, including males singing Eastern songs, and a male “unspotted, singing an Eastern song” (Kathy DeLara, eBird.org). In extensive surveys in the 2000s in Lincoln County, T.J. Walker found 22 Eastern Towhees among the 2307 towhees detected. Data (Silcock, cited above) show that in both counties, however, Spotted Towhees account for 98-99% of towhees. In Keith County, Eastern Towhee is a “rare summer resident”, although only two records are cited; one was seen in 2004 that looked like an Eastern Towhee but sang a Spotted Towhee song (Brown et al 2012). Scharf (2005), during a four-season netting study in the “nesting season”, found 20 Eastern Towhees of phenotype category “0” (“pure” Easterns, per Sibley and West 1959) along the Platte River in Dawson Co 2001-2004.

In the east, phenotypic male Spotted Towhees singing Spotted songs were carefully studied at Rose Creek WMA, Jefferson Co 27 Jul 2016, and another was near Steele City, Jefferson Co the same day. A male at Schramm SP, Sarpy Co 21-29 May 2005 that looked and sang like a Spotted Towhee possessed about half of the white primary patch typical of Eastern Towhee. Spotted Towhees were reported in eBird 18 Jun 2020 Saunders Co, and 26 Jul 2013 Seward Co.

Perhaps of interest in this context, Zink (1994, Table 3) found that in three plumage groups of Fox Sparrow, iliaca, unalaschcensis, and schistacea, nine of 139 samples had mtDNA that did not match the plumage type. Similarly, Wright (2019a) noted that “classic … Cassiar-like males [of Dark-eyed Junco] have been photographed as far east as Nova Scotia and New Jersey… but there can be no certainty that the birds are not hybrids….”.

It is clear from this discussion that more study of the distributions of Eastern and Spotted Towhees in the breeding season in Nebraska is needed. It has been assumed that introgression occurs statewide, but the relative contributions of genetics and adaptation (controlled presumably by assortative mating) to the distributions of phenotypic Eastern and Spotted Towhees and putative introgressants is unknown. There have been no genetic studies of this area of species overlap in Nebraska.

An unexpected finding was a white-eyed Spotted Towhee at Gilbert-Baker WMA, Sioux Co 21 and 28 May 2018 (Wright 2019b); Wright assumed that a pigment mutation in the stroma of the bird’s irides resulted in the lack of coloration and that such an aberration should be looked for in Spotted Towhee populations.

Wintering birds in the south and east probably depart by early May, although last dates are difficult to determine due to the presence of intergrades that are often reported as this species.

Most departing birds leave the summer range by mid-Oct.

A large total of 120 were banded in the period 24 Aug-7 Oct for the 2015 fall season at Wildcat Hills NC, Scotts Bluff Co, indicating peak fall movement occurs there in Sep.

Significant movement into the southeast begins in late Sep; it was “common” in Omaha in early Oct 1975 (Williams 1976). The first “spotted” birds appear in Missouri in early Oct (Robbins 2018)

A note regarding Pipilo towhees on the Seward-Branched Oak CBC is of interest, suggesting no overlap of Nebraska winter ranges: “I checked and we have had eastern towhees on the count only three times since 1993. In contrast, we have had spotted towhees 13 times (plus one count week bird). We have never had both species on the same count” (Joseph Gubanyi, pers. comm.).