There is a specimen, BMNH 1885.1.5.3, in the British Museum of Natural History that was donated by USNM; it was also collected at Papillion, Sarpy Co, but the collection date is not given in Bowdler Sharpe’s Catalogue of the museum’s bird collection, Volume 10, published in 1885.

Migration occurs mainly in Apr, ending mid-May. Turner (1978) found that this species “usually appears around Apr 20” in Kearney Co. Most reports are from the central, especially Adams and Webster Cos; it is most numerous in central Kansas also (Thompson et al 2011).

Comments: Spraque’s Pipit is difficult to detect during migration and the species has likely been under-reported, probably due to the low number of observers in central Nebraska and their limited familiarity with the species. In recent years, observers slowly and collectively learned it can be reliably found at certain sites such as Spring Creek Prairie, Lancaster Co and Prairie Dog WPA, Phelps County. However, additional searching of suitable habitat is likely to yield additional sites that are regularly used. Scott Seltman has much experience with this species in western Kansas. He states: “The pipits like high points on the ridges and hilltops. They like short dense grass, about 6-8” tall. Timing is everything. Here the migration peak is between 9/25 and 10/25 every year. These birds usually come down with early cool fronts and will hang around until all the insects are dead or it happens to snow. They REALLY hate cold weather so after a super hard frost or even the smallest amount of snow, it’s usually pointless to even look for them.”

Spraque’s Pipit was considered for listing under the Endangered Species Act in 2009, but the U.S. Fish and Wildlife Service (2016) concluded that listing was not warranted. 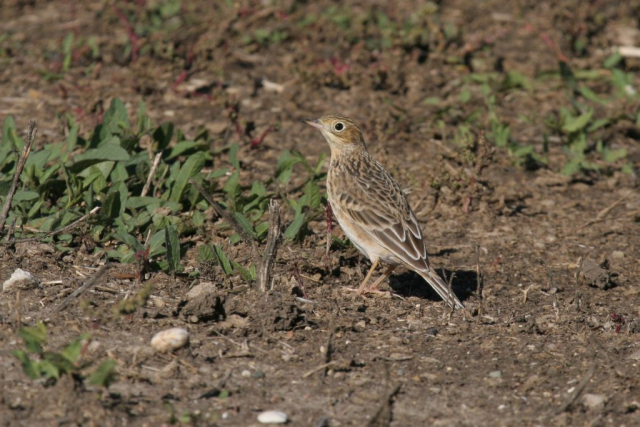