Taxonomy: There are 13-17 subspecies recognized by various authors (Phillips 1986, Gill and Donsker 2017, Clements et al 2017, Pyle 1997, Walker et al 2020). However, descriptions of the ranges of these subspecies vary among the various authors and are difficult to reconcile, especially those of annectens and macrolopha. In general, however, annectens breeds in the northern Rocky Mountains south to northwestern Wyoming, and macrolopha; in the southern Rocky Mountains, from northeastern Utah and southeastern Wyoming southward (see map in Faulkner 2010). Breeders in northern Utah, between these ranges, are apparently intergrades (Phillips 1986). Reports of its breeding in the Black Hills of South Dakota are unsupported (Tallman et al 2002, Phillips 1986, Faulkner 2010).

Early Nebraska ornithologists seemed uncertain about subspecies assignment of the available Nebraska specimens and personal sightings; annectens, diademata, and macrolopha; were all invoked (Bruner et al 1904, Swenk 1918b, Tout 1947, Rapp et al 1958). It is not known which Nebraska specimens were examined by Phillips (1986), who revised the ranges of the various Interior subspecies. Although the nearest Wyoming population is in the Guernsey State Park area (Faulkner 2010), only about 30 miles from Nebraska, these are of the subspecies macrolopha, which, oddly, is unrecorded in Nebraska. Available evidence suggests that Nebraska birds are annectens; Phillips (1986) assigned Nebraska specimens to this subspecies, which breeds south and east to northwest Wyoming and winters irregularly to northwest Nebraska. Photographs of several that appeared in Scotts Bluff Co during winter 2012-2013 were of the Rocky Mountain subspecies annectens and there are two specimens of annectens taken in northeastern Kansas (Thompson et al 2011). However, Walker et al (2020) pointed out that “During irruptions, flocks apparently are composed mainly of immatures, which may have originated from areas much farther north”. Thus, it appears likely that annectens from higher elevations in northwest Wyoming is more prone to move downslope in winter, and sometimes erupt, than lower-elevation macrolopha; which appears to be strongly sedentary. The specimen cited above (see Documentation) is labeled diademata, an epithet currently used for populations in the southwestern US (Phillips 1986, Walker et al 2020).

Winter: There are about 38 reports of Steller’s Jay, about 27 of which are from the Platte River Valley, east to Lincoln Co, in the period 11 Aug-30 Apr. Of the remainder, two are from the east, Lancaster and Nuckolls Cos, in years when the species was recorded in the west, three are from the Pine Ridge in Sioux and Dawes Cos, and four from the Sandhills.

This species apparently enters Nebraska via riparian corridors, primarily the North Platte River Valley, and is usually seen in towns or at feeders. The nearest Wyoming population is only about 30 miles from Nebraska; these are of the subspecies macrolopha (Faulkner 2010). 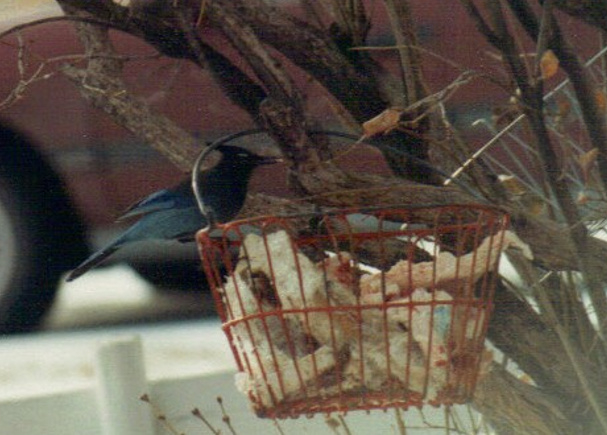