A later date was of three presumed spring migrants in York Co 12 Jun 2005.

Late dates above are determined to be migrants rather than summer visitors when three or more birds are reported at one location. For later dates see Summer.

Summer: There are 11 reports 6 Jun-9 Jul of 1-2 birds that are likely non-breeding one-year-olds that did not complete migration; most remain on the wintering grounds (Klima and Jehl 2020). Others may simply suspend migration, such as one in alternate plumage at two nearby locations in Lancaster Co 20 and 28 Jun 2020. One at Lake McConaughy, Keith Co 13 Jun 2002 was a molting adult, possibly a failed breeder; such birds may leave breeding locations by late Jun (Klima and Jehl 2020).

Early dates above are determined to be migrants rather than summer visitors when three or more birds are reported at one location. For earlier dates see Summer.

Adults arrive about the second week of Jul and small groups occur through mid- to late Aug, peaking in numbers in mid-Aug. Large flocks of juveniles, most molting into first basic plumage, begin arriving in late Aug and may continue their migration sporadically through Sep, with a peak in mid- to late Sep. A “very fresh” juvenile was in the eastern Rainwater Basin 22 Aug 2000.

Although good numbers pass through in fall, there are fewer than in spring; this species tends to migrate to and along the Atlantic Coast in fall. 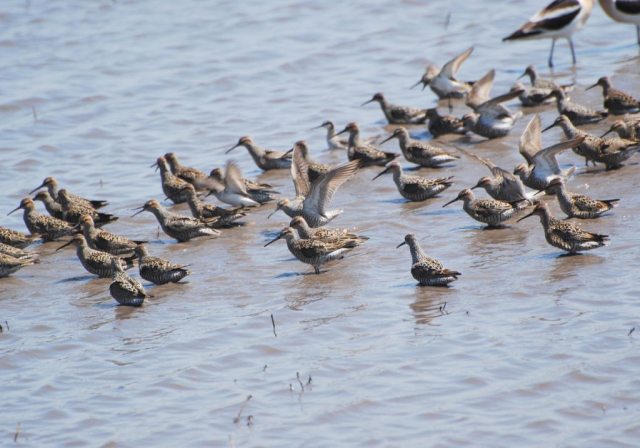