Taxonomy: There are six subspecies recognized, often separated into groups, “Russet-backed” and “Olive-backed”, which may prove to be sibling species (Phillips 1991). Western subspecies ustulatus, phillipsi, and oedicus comprise the Russet-backed Group, and incanus, swainsoni and appalachiensis comprise the Olive-backed Group (Mack and Yong 2020). Among the latter group, incanus breeds coastally in northcentral and eastern Alaska and western Canada, swainsoni breeds in central and eastern Canada and northern USA, and appalachiensis in the eastern USA (Mack and Yong 2020).

Virtually all of Nebraska’s migrant Swainson’s Thrushes are likely to be swainsoni, which is the most widespread of the Olive-backed Group (Phillips 1991). Subspecies almae was described as a Rocky Mountains breeder by Oberholser (1898), who suggested that birds reported in summer on the Pine Ridge (Cary 1902) be assigned to almae (Bruner et al 1904). This form has, however, since been merged with swainsoni (Mack and Yong 2020, Gill and Donsker 2017). It has been suggested (Phillips 1991) that the Alaskan Olive-backed subspecies incanus may occur in Nebraska; it has been reported in northeast Illinois (AOU 1957) and migrates through at least western Oklahoma (Phillips 1991); separation from swainsoni is difficult; indeed, birds ascribed to almae by Oberholser may have been incanus (AOU 1957, Bruner et al 1904).

It is likely that individuals of the Russet-backed Group of Pacific coast subspecies ustulatus, a Pacific Northwest breeder, occur in Nebraska in low numbers as spring migrants. There are two Nebraska records, the first a single (among 43 identified as swainsoni) at Oliver Reservoir, Kimball Co 1 Jun 2019, described as “Rusty back at first recalling Veery but not as bright. Spotting on chest more restricted than on olive-backed and not as bold. Buff face blended into rust hues of head and buff wash on chest. Sides warm brown rather than olive-gray” (Steven Mlodinow, eBird.org). The second Nebraska record was of one photographed at Gering Cemetery, Scotts Bluff Co 15 May 2020 (eBird.org). There are several recent reports with photographs from extreme northeastern Colorado 6-30 May of Swainson’s Thrushes referable to the Russet-backed Group; essentially these are birds that have uniformly more rusty than buffy upperparts and buffy flanks (eBird.org, accessed Aug 2019). A purported specimen of ustulatus from as far east as southeast Iowa (AOU 1957) was re-identified as a Veery (Phillips 1991).

As stated by Phillips (1991) in his inimitable way, “Surely genera like Catharus are not for ornithologists less competent than Ridgway and Hellmayr, for over-eager listers, or for the shrill opponents of accuracy”.

Most pass through in May. Departure in the south and east is complete by early Jun, but a little later in the north and west.

The earliest specimen date for Kansas is 24 Apr (Thompson et al 2011); Tallman et al (2002) noted that they are “not confident” of reports earlier than the last week of Apr. Most such reports are probably of Hermit Thrushes.

Summer: The only documented breeding record is of a nest in West Ash Creek Canyon, Dawes Co 12 Aug 1973 (Rosche 1974). This nest was located in deciduous riparian growth adjacent to ponderosa pines, and contained two eggs and an “advanced fledging” nestling on 12 Aug, but the nestling was gone and the two remaining eggs were cold on 15 Aug. The eggs are now specimen UNSM ZM17073. As stated by Rosche (1974), there was no prior evidence for breeding, although it had been assumed based on Hudson’s collecting a female with enlarged ovaries 17 Jun 1938 in Squaw Canyon, Sioux Co (Hudson 1939).

Migrants are not uncommon, however, as late as the second week of Jun in the northwest (Rosche 1982); Jun reports may also be the basis for purported nesting in the central Niobrara Valley (Bates 1900; Youngworth 1955). That these reports are likely non-breeding birds is indicated by summer reports from unlikely breeding locations 18 Jun and 27 Jul 1981 Garden Co, 22 Jun 1995 Garden Co, 23 Jun 1969 McPherson Co, 30 Jun 1967 Greeley Co, and 1-10 Jul 1989 Lincoln Co. A remarkable report was of a singing bird near Orleans, Harlan Co 6 Jul 2000 by observers familiar with the species from residence in the state of Washington; another was in the same place 23 Jun 2002.

Arrival is generally in early Sep, with few records in Oct.

A specimen collected at Glenvil, Clay Co 3 Nov 1918 and identified as this species is no longer extant; it was likely a Hermit Thrush (Jorgensen 2012). We consider reports after mid-Oct to be of Hermit Thrushes. See Comments.

Comments: Far fewer Swainson’s Thrushes occur in fall than in spring. Ruegg and Smith (2002), using banding and genetic studies, proposed that the breeding range of “continental” Swainson’s Thrush (subspecies swainsoni ) shrank to a southeastern US refugium during the last glacial maximum. As the ice sheet receded, the breeding range expanded north and west. However, during fall migration, the thrushes continued to migrate southeastward to their ancestral breeding refugium, then south across the Gulf itself, thus setting up an elliptical migration pattern that largely avoids the central USA in fall. Western “coastal” Swainson’s Thrushes (subspecies ustulatus and incanus), less disrupted by ice sheets, continued to migrate along the Pacific Coast on their ancestral pathway. 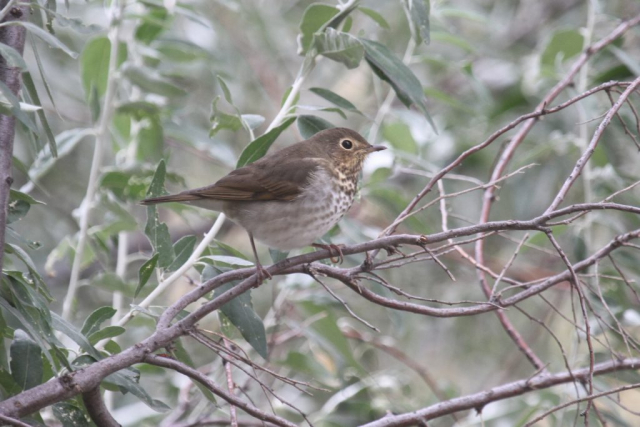 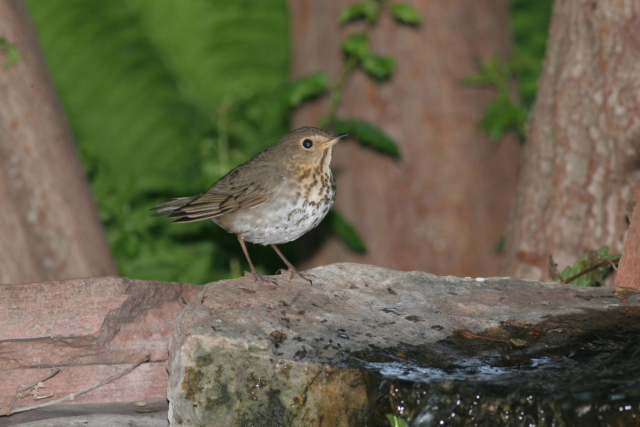 Cary, M. 1902. Some general remarks on the distribution of life in northwest Nebraska. Proceedings of Nebraska Ornithologists’ Union 3: 63-75.

Hudson, G.E. 1939. Some ornithological results of a six-week’s collecting trip along the boundaries of Nebraska. NBR 7: 4-7.

Ruegg, K.C., and T.B. Smith. 2002. Not as the crow ﬂies: A historical explanation for circuitous migration in Swainson’s thrush (Catharus ustulatus). The Proceedings of the Royal Society of London B 269: 1375–1381.