According to AOU (1957), georgiana breeds west to central Nebraska. Subspecies ericrypta occurs during migration (Rapp et al 1958; Johnston 1965). Wintering birds are thought to be northern breeders (erycripta?) replacing more southerly breeders (georgiana?) that depart in winter (Herbert and Mowbray 2020). None of the UNSM specimens are identified to subspecies.

Early dates above are away from known wintering areas (see Winter).

Migration is from late Mar through mid-May, peaking around 20 Apr.

Away from the east, migrants are rare and not often detected away from breeding sites. In the east they are more numerous and are often found in flocks with other sparrow species. Potential summering birds may not arrive in areas in the central north of the Platte River Valley until after northern migrants have passed through (Herbert and Mowbray 2020).

Summer: Although AOU (1957) stated that this species breeds west to central Nebraska, it is “very local” in its distribution (Johnsgard 1979), occurring mostly in the north, with isolated peripheral breeding sites, notably the Platte River Whooping Crane Trust area in Hall Co. The breeding range of Swamp Sparrow is not well defined in the state and is largely based on the presence of singing males at cattail marshes during the summer. Confirmed breeding records are few. Mollhoff (2001, 2016) indicated little change between the two breeding bird atlas periods; in the first period, 1984-1989, breeding was confirmed mainly from the Loup River drainage north, in Brown, Rock, Loup, Wheeler, and Boone Cos, and in the second period, 2006-2011, in Rock and Valley Cos, as well as in the Platte River Valley in Hall and Lincoln Cos. Singles in southeast Sherman Co 17 Jun and 5 Aug 2018 may have been local breeders. Nesting occurred in Blaine Co in 1991 (Grzybowski 1991) and in Rock Co in 1985 (Williams 1985).

In the central Platte River Valley, summering birds were first noted during censuses by Lingle (1996), and breeding season surveys conducted annually since 2015 on Platte River Crane Trust properties in Hall Co have yielded surprising numbers of Swamp Sparrow, including 47 detections, mostly of singing males, in 2021 alone (Caven 2021). Nests with eggs were found 9 May 2007 and 21-26 Jun 2008 on Crane Trust property (Mollhoff 2022).

An earlier date in the extreme southeast, from Douglas Co to Lancaster Co and south, where breeding is not known to occur, is 12 Sep 2020 Cass Co.

Last dates above are away from the extreme southeast and Republican River Valley. A later date is 23 Nov 2021 Nance Co.

Winter: Swamp Sparrows linger into early winter unless very cold weather pushes birds farther south; reports in Dec are cited under Fall. Reports into late Jan and early Feb are not unusual but reports of overwintering or birds attempting to overwinter are likely only in the extreme southeast and Republican River Valley. 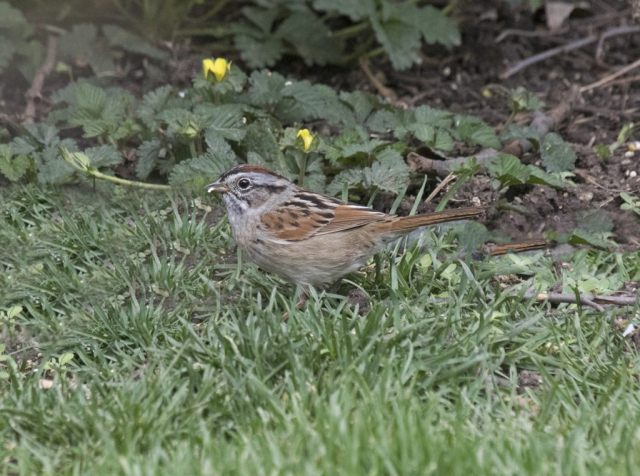 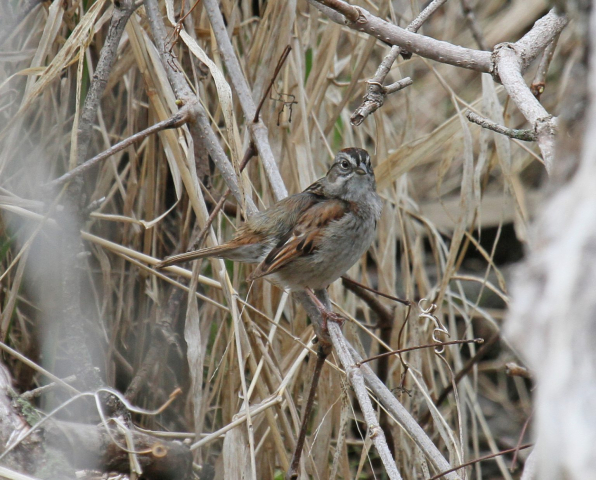