Taxonomy: Two subspecies are recognized (Pyle 1997), one in Mexico; the other, townsendi, breeds and winters throughout North America range.

Departure from wintering grounds occurs by late Mar in the east and in the Panhandle by mid-May.

Summer: At the end of the 19th century, this species occurred as a breeder in northern Sioux Co, occupying the various wooded riparian canyons that drain the Pine Ridge into the Hat Creek Basin (Bruner et al 1904). Two nests were found in Monroe Canyon in 1900, and a pair was seen the next summer (Crawford 1901, Mollhoff 2022). Although it is not clear that significant changes in habitat have occurred, the species now occurs there only casually during the breeding season. It breeds in the Black Hills of South Dakota (Tallman et al 2002) and the Laramie Mountains in southeast Wyoming (Faulkner 2010).

Recent evidence of possible breeding activity in Sioux and Dawes Cos has been inconclusive. In 1986 Rosche found a nest with eggs on 31 May (Williams 1986, Ducey 1988) in Hat Creek Canyon, Sioux Co; this nest was unsuccessful (Richard Rosche, personal communication; Sharpe et al 2001). Apart from this report, since 1900 there have been several sightings of adults and flying young, including an adult and a juvenile in Monroe Canyon, Sioux Co 18-20 Jul 1979 (Fickel 1979) and a juvenile seen flying strongly in Sowbelly Canyon, Sioux Co 22 Jul 1980 (Rosche 1982). Rosche (1982) suggested these juveniles were not necessarily fledged in Nebraska, but possibly nearby in the Black Hills of South Dakota. Since then, adults suspected of carrying food were seen at Chadron SP, Dawes Co and in East Monroe Canyon, Sioux Co on separate occasions in recent years; no nests were found despite extensive searches (Wayne Mollhoff, personal communication). A flying juvenile was seen along Pants Butte Road, Sioux Co on 31 Jul 2012, and a single was in Dawes Co 3 Aug 1988.

Further east, one at Metcalf WMA, Sheridan Co 12 Jun 2011 may have been breeding or merely a very late migrant; another was one heard on a Western Wood-Pewee recording at NNF Halsey 18 Jun 2016. Rosche (1994) cited a report (Benckeser 1948) of an adult and a young bird in cedars east of Ogallala, Keith Co 18 Jul 1948, and suggested that an occasional nesting attempt in the area “would not be too surprising.”

Solitaires arrive in the Panhandle in Sep, reaching the east in small numbers most years by late Nov-Dec.

Winter: CBC data show that highest densities of wintering solitaires occur in the Panhandle, with lower densities occurring throughout the rest of the state, declining sharply eastward. Wintering birds are mostly, if not all, altitudinal migrants, presumably from South Dakota and Wyoming, which accounts for the variability of wintering numbers resulting from varying severity of winter weather. Winter 2015-2016 was a low numbers year for this species; the Scottsbluff CBC 19 Dec found only one, and only 24 (14 of these at Lake McConaughy, Keith Co) were found on all 2015-2016 CBCs, none east of North Platte, Lincoln Co.

This species wintered “eastward over the entire state” around 1900 (Bruner et al 1904), a status which is unchanged to the present, although solitaires are rare in the east. Pooled statewide CBC data show an increase in birds per party-hour beginning in the early 1990s. 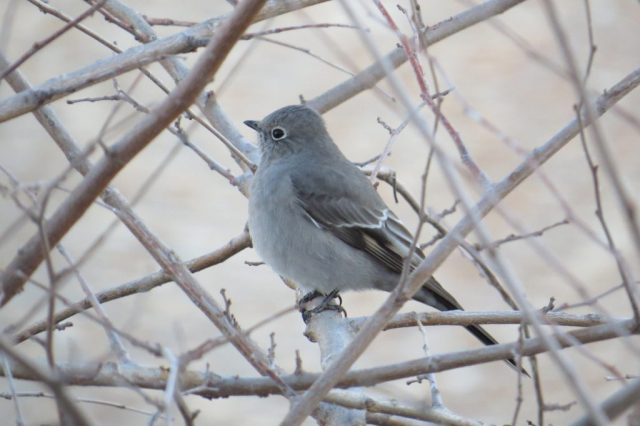