Peak numbers occur during Apr-May, but timing is variable, likely related to temperature (Winkler et al 2020) and breeding status. This species has a “large populations of both male and female floaters”, especially one-year-old females that do not breed (Stutchbury and Robertson 1985).

Summer: Tree Swallow currently nests statewide; the BBS Summer Distribution Map 2007-2013 shows somewhat higher numbers in the north. BBS trend analysis shows that Tree Swallow has increased statewide annually by 13.41% (95% C.I.; 10.17, 16.99) 1966-2013. Mollhoff (2016) also showed a notable increase of reports between the first and second BBAs. Lying near the southern edge of the species’ breeding range, much of the southern and western parts of the state have been occupied by breeding birds only in recent decades as a result of reservoir construction providing plentiful dead tree stubs (Grzybowski 1989) and by the provision of nest boxes intended for bluebirds but which are readily utilized by Tree Swallows (Winkler et al 2020). There is, however, only sparse information regarding specific dates of establishment for these parts of the state.

In the southwest, where Tree Swallows are least numerous, nest boxes at Medicine Creek Reservoir, Frontier Co were being defended 26 May 2001; the earliest Republican River drainage report is in 1992, also in Frontier Co. Up to 12 were at Harlan Co Reservoir, Harlan Co 6-21 Jun 1998, and breeding was documented at Alma, Harlan Co where adults were feeding young 25 Jun 1999 and 16 Jun 2000. Adults were using nest boxes near Harlan Co Reservoir dam 6 Jun 2003. There is a nesting record for Chase Co in 2005.

Tree Swallows have bred commonly for many years in the Missouri River Valley (Bruner et al 1904), but westward in the southeast, expansion is relatively recent into the drainages of the Big Blue and Little Blue Rivers. Earliest reports there are in the 1960s, with summer reports from Clay Co in 1975, Gage Co in 1957 and 1964, and Saline Co in 1956.

Nesting in the north may not be as widespread as in Bruner’s time (Bruner et al 1904), but it breeds in moderate numbers west at least to northern Cherry Co; Short (1961) had reported birds near Valentine in Jun 1955 and suggested that it “may breed there.” There are several records of breeding in the general area of Valentine in the 1980s; Mossman and Brogie (1983) found a few birds inspecting cavities at locations in Cherry Co in 1982. There are reports for Keya Paha Co in 1960, Brown Co in 1971, and Rock Co in 1985.

Reports in the Loup River drainage include early breeding season reports from Logan Co in 1943, a single bird at NNF Halsey in 1955 (Short 1961), and a nesting pair using a bluebird box in southern Holt Co (Blake and Ducey 1991). Bray (1994), however, listed this species only as a migrant at NNF Halsey.

In the west, by the early 1980s Rosche (1982) noted only one nesting site in the northern Panhandle, in cottonwood and willow stubs at Whitney Lake, Dawes Co, where one or two pairs nested each year. There are Jun and Jul reports from Sioux, Dawes and Sheridan Cos as early as 1973, from Garden Co since 1978, and Scotts Bluff Co since 1979. These dates compare with the dates for establishment of nesting birds in northeastern Colorado, where nesting was first confirmed in 1963, and was regular at nine sites along the South Platte River by 1990 (Andrews and Righter 1992). A first nesting record for Garden Co was of two nests with eggs at Crescent Lake NWR 7 Jun 1981 (Mollhoff 2022). Rosche (1994) indicated that breeding in the west and north has recently become more widespread. A presumed first county nesting occurred in Cheyenne Co where a pair had eggs in a nest box 25 Jun 2008. Mollhoff (2016) showed a marked increase in the spatial distribution in the Panhandle between the first BBA, when reports were restricted to blocks in Garden (1), Sheridan (4) and Dawes (1) Cos, and the second BBA, when numerous reports were from all Panhandle counties except Sioux and Box Butte.

Fall migrants are less common westward, although recent fall counts reflect increasing numbers of migrants at westerly locations where few if any were previously reported, such as 285 at Crescent Lake NWR 9 Aug 1995, 750 there 8 Sep 2013, and 1000 there 6 Sep 2020. This species roosts in large flocks during migration, mostly in “reed or cane beds” (Winkler et al 2020); perhaps these large counts at wetland locations in western Nebraska fit this pattern. As far back as 1939 a flock of 200 was reported in Lincoln Co 25 Aug (Tout 1947), where breeding was not known at the time. It was not recorded in fall in Keith Co (Rosche and Johnsgard 1984) or Hall Co (Lingle and Hay 1982), although later studies by these authors (Lingle 1994; Rosche 1994) indicated increased occurrence. 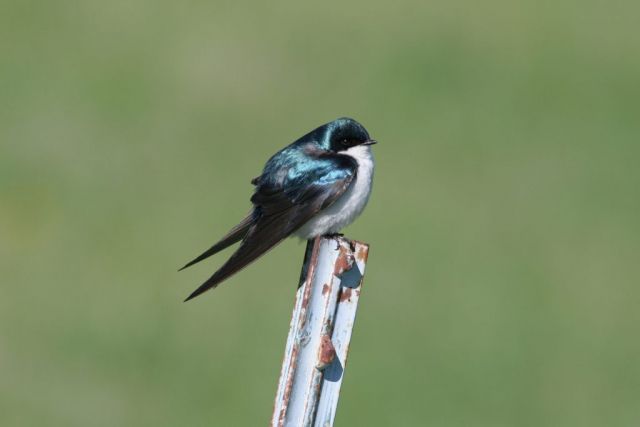 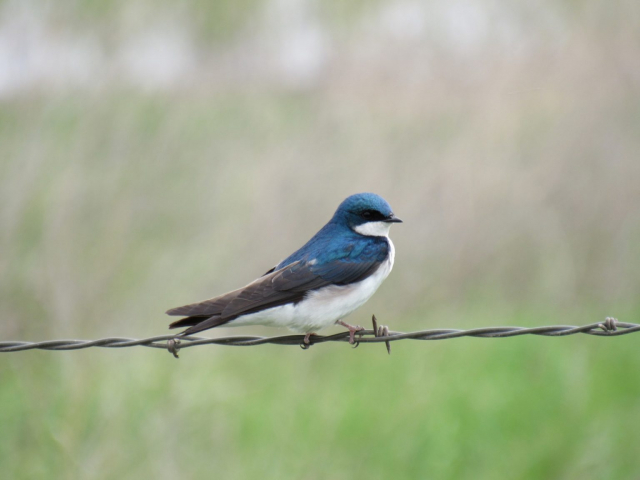