Changes since 2000: Numbers of this species in North America have increased exponentially in recent decades (Baldassarre 2014). The estimated number of resident Trumpeter Swans in Nebraska has increased from 200 individuals in 2000 to 311 individuals in 2015 (Groves 2017), with more recent surveys showing Nebraska may have more than 700 resident Trumpeter Swans (Mark P. Vrtiska, personal communication). Increases in Iowa and Minnesota have been more impressive, from an estimated 742 individuals in 2000 up to an estimated 17,224 individuals in 2015 (Groves 2017). As a result of local and regional increases, migrants, and more recently wintering birds, have become locally common in Nebraska, especially since the early 2000s. The number of Trumpeter Swans counted during mid-winter waterfowl surveys was less than 200 prior to 2000 but counts have exceeded 700 in recent years (Johnson et al 2017). The increasing numbers of wintering birds in eastern Nebraska corresponds with increases in Minnesota and Iowa and some of these Nebraska sightings are of birds with red neck collars from the Iowa re-introduction program and orange patagial tags from the Minnesota program. Since 2014, though, red neck collars with satellite transmitters have also been placed on 24 Trumpeter Swans in the Nebraska Sandhills (Mark P. Vrtiska, personal communication; see Comments below).

Summer:  Trumpeter Swans apparently bred historically on Sandhills lakes of Nebraska and South Dakota in small numbers (Ducey 1988, Ducey 1999a) but were extirpated before the end of the 19th century. In 1960-63, cygnets from Red Rock Lakes NWR, Montana, were introduced to Lacreek NWR in South Dakota, and by 2008 this population, surveyed on its Lacreek NWR wintering grounds, totaled 639; some 90% of this population now summers in the Nebraska Sandhills (Vrtiska and Comeau 2009).

Away from the Sandhills, breeding is rare, but appears to be slowly increasing; breeding was noted in 2009-2010 on a small pond near Ravenna in Buffalo Co. A pair of adults with two flightless young was photographed there 29 Jul 2009; the family group remained at the site through at least 20 Oct, and presumably the same pair bred there successfully again in 2010. Since then, breeding has been successful most years; two adults with two cygnets were present 26 Jun 2017 and two adults first reported 4 May 2018 had two very young cygnets 17 Jun. In 2019, however, only one adult was present, and in 2020 two were there 17 Mar -16 Jul, but no young were seen.  In 2021, two adults were present 13 Apr-26 Jun, but no evidence of nesting was found. In 2022 two adults were present 15 May.

Additional reports of breeding or likely breeding in areas peripheral to the Sandhills are recent. An un-banded pair on a small playa near Colon, Saunders Co 16 Apr 2011 was still present and seen mating through 11 May, and two adults were at a pond in western Douglas Co 25 Jun-15 Aug 2013, but no direct evidence of breeding was noted at either location. A pair on Overton Lake, Holt Co 15 Apr 2015 was “apparently nesting” and a pair along the Elkhorn River in Antelope Co 9 Apr 2015 apparently was there in 2014 also and may have been the same pair as that nesting on Beaver Creek in extreme northwest Boone Co. A family group of seven, possibly local breeders, was at Hackberry Creek WMA, Antelope Co 14 Sep 2020.

Migration is generally associated with weather conditions and usually does not begin until mid-Nov, although there are 12 earlier dates away from the breeding range 1 Sep-25 Oct. A large group for the early date was the 72 in Lincoln Co 27 Oct 2020.

Until the 1980s, most Nebraska Trumpeter Swans were summer residents in the Sandhills and wintered at Lacreek NWR, South Dakota (Baldassarre 2014). By the 1980s, however, Trumpeter Swans were observed wintering locally in Nebraska, likely in response to increasing numbers and limited open water at Lacreek NWR. Currently, migration includes short distance movements of resident birds of the High Plains flock and longer distance movements of birds of the Interior Population. A Trumpeter Swan outfitted with a satellite transmitter and its family group wintered 23 Dec 2020-3 Mar 2021 near the Kansas-Oklahoma border southeast of Dodge City, Kansas (Anna Buckardt Thomas [Iowa DNR], personal communication; Mark P. Vrtiska, personal communication). Earlier, an Iowa trumpeter swan wintered as far south as Oklahoma during the winter of 1998-99, and another wintered near Heber Springs, Arkansas in 1999-2000 (https://www.iowadnr.gov/Conservation/Iowas-Wildlife/Wildlife-Species-Restoration).

As of 2021-2022, numbers reported in winter continue to increase (see High Counts, below).

Traditional Nebraska wintering sites include Blue Creek in Garden Co, the Snake River in Cherry Co, portions of the Loup River system, and the North Platte River at Lake Ogallala, Keith Co (Rosche 1994; Ducey 1999b, Vrtiska and Comeau 2009). However, as numbers have increased rapidly in the 2000s, flocks are being reported in the east at locations where open water is reliably available. Regular wintering locations include Carter Lake, Omaha, sand and gravel mine lakes near Ashland, Saunders Co, and DeSoto NWR, Washington Co. During winter 2016-2017, first arrivals at Carter Lake were 11 on 22 Dec, peak count was 103 on 21 Jan, and numbers declined rapidly from mid-Feb, with 74 on 5 Feb but only 14, the last report, on 12 Feb.

Comments: Breeding populations that are currently geographically isolated, as a result or artifact of reintroduction efforts, have been given unique names. Resident birds that breed and winter in Nebraska are considered part of the High Plains population or flock (Groves 2017). Individuals from the Interior Population or flock, which breed as close as Iowa and Minnesota (Groves 2017), occur in Nebraska during winter, especially in the east.

Trumpeter Swans are occasionally kept in captivity; two have been kept at Cody Park, North Platte, Lincoln Co for several years and are sometimes erroneously reported as wild birds. 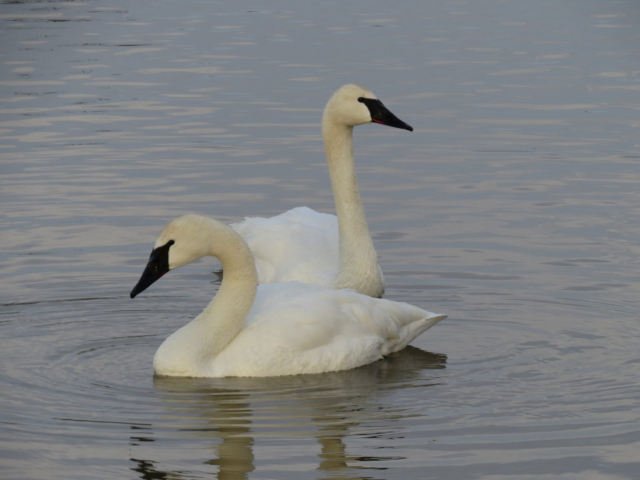 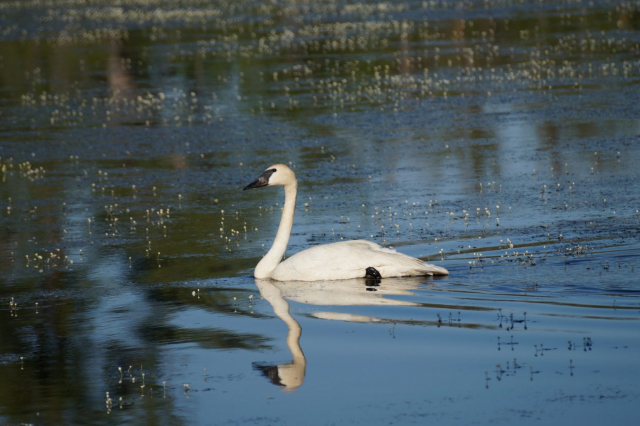 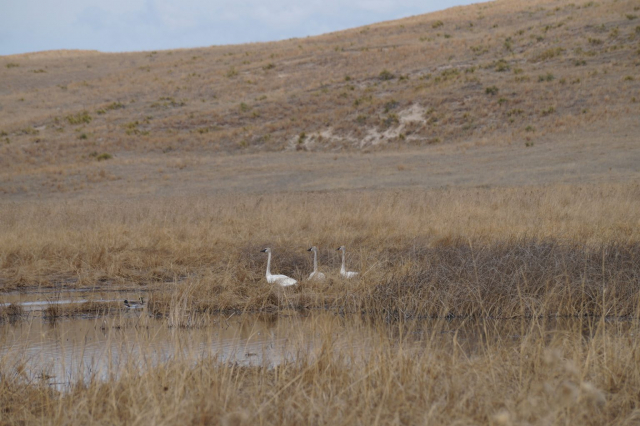 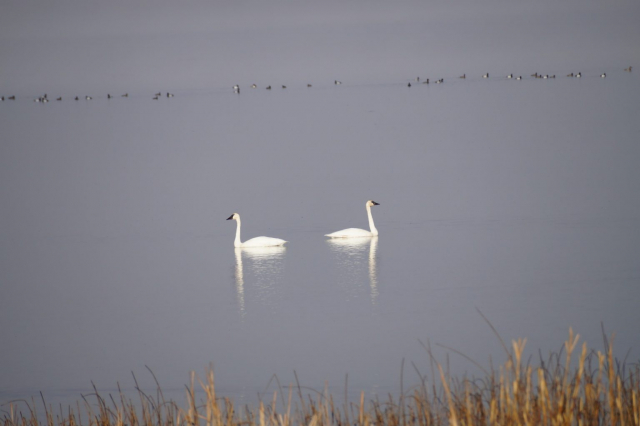