Migrants usually arrive during the latter half of Apr, with peak migration occurring in early and mid-May. Earlier dates are 31 Mar 2012 Grant Co, 2 Apr 2008 Lincoln Co, and 4 Apr 2008 McPherson Co.

Summer: Upland Sandpiper breeds statewide with the possible exception of the extreme southwest and the southern Panhandle, although it was reported in Scotts Bluff Co during summer 1970-72, 1975-76, 1978, and 1983, in Perkins Co 1974, and in Chase Co 13 Jun 1990. Breeding densities are greatest in the Sandhills and northern Panhandle, where the species is common. It is less common in the most intensely cultivated areas of the east and south-central.

Fall migration begins in late Jul, and most have moved out of Nebraska by the first week of Sep; there are no documented reports for Oct. Fall flocking may begin mid-Jul; 50 were near Sumner, Dawson Co 12 Jul 2015, and high counts occur in early Aug.

Comments: Numbers have declined since the 19th century, although serious declines may have occurred only in areas of the state where grasslands have been converted to cropland. Jorgensen (2004) notes early observations by Sandy Griswold of “countless thousands” being hunted in Fillmore Co in late Aug 1904. Moderate to high densities are present in relatively untouched grasslands in Nebraska. Even small grassland tracts may attract a breeding pair; a pair raised a brood on an isolated tract of lowland meadow of less than 15 acres (Roger Sharpe, pers. comm.). Upland Sandpipers also nest in agricultural fields, especially in the Rainwater Basin (Jorgensen 2012, Brown 2018). 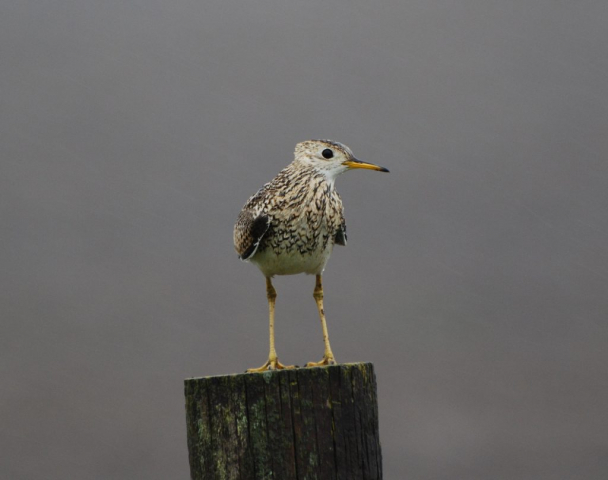