Taxonomy: Six subspecies have been recognized (Pyle 1997) based on a revision by Phillips (1991); some authors merge one or two of the subspecies named by Phillips (1991). Heckscher et al (2020) listed five: subpallidus, breeding from northern Washington east of the Cascades south to northeast Oregon and east to northern and central Idaho and western Montana, salicicolus, breeding from British Columbia south through the Rocky Mountains to Colorado and northeast Arizona, levyi, breeding from Alberta to northern Michigan and Wisconsin, fuliginosus, breeding in Newfoundland, and fuscescens, breeding south of fuliginosus in eastern North America from Ontario east to New Brunswick and Nova Scotia. Subspecies pulichorum (Phillips 1991) is merged with fuscescens (Heckscher et al 2020).

Field identification and even museum identification of Veery subspecies, and indeed the species, is tricky, largely due to foxing of older specimens (Phillips 1991). Nebraska Veeries are clinal in extent of brownish/reddish coloration, browner in the east (levyi) and grayer in the west (salicicolus).

Until Phillips (1991), two subspecies had been recorded in Nebraska (Rapp et al 1958), eastern fuscescens and western salicicolus. The occurrence of fuscescens in Nebraska is not well-documented. Rapp et al (1958) stated that fuscescens was a “rare migrant in the Missouri River Valley,” while salicicolus “is more common in the western half of the state than in the east.” Based on currently understood breeding ranges (Phillips 1991, Herkscher et al 2020), fuscescens occurs from Ontario eastward and in the Appalachian Mountains, and, while Rapp et al (1958) were probably correct in calling fuscescens a “rare migrant in the Missouri River Valley”, its occurrence is likely only casual in Nebraska. Phillips (1991) stated that fuscescens was a migrant west “casually” to western Oklahoma and east-central Colorado and indeed “not common” even in Arkansas.The westernmost documented Nebraska record of fuscescens is a specimen, #2043 in the Brooking Collection, taken at Inland, Clay Co 3 May 1915 and identical to specimens at UNSM identified as this subspecies by Oberholser (Swenk, Notes Before 1925); it is uncertain whether this specimen would be assigned to levyi or not under current taxonomy.

Subspecies salicicolus breeds in the Rocky Mountains and has a disjunct population in the South Dakota Black Hills (Drilling et al 2018). It is the expected migrant in western Nebraska, although at least some subpallidus might occur as well. Phillips (1991) noted that “most published reports of “salicicola” probably apply” to levyi.

Phillips (1991) separated former salicicolus Veeries breeding from Alberta to Wisconsin as levyi; this subspecies is not as reddish as fuscescens, but more so than salicicolus. Since Phillips (1991) considered migrant levyi to occur in a corridor between eastern New Mexico and Mississippi, most migrant Veeries in at least eastern Nebraska are likely levyi.

Almost all Veeries migrate across the Gulf of Mexico spring and fall, and those breeding in the western and northwestern USA, subpallidus, salicicolus and levyi, migrate north and then west in spring and the reverse in fall (Heckscher et al (2020). Maps in eBird (eBird.org, accessed April 2017) show all Veeries still in the eastern half of the USA in April, but by late May western breeders have occupied the Rocky Mountains (salicicolus) and points further north and west (subpallidus). Because Veeries occur statewide in spring in Kansas (Thompson et al 2011) but primarily only in eastern and western Nebraska, separation of migrating western breeders from central Canadian levyi probably is centered on Kansas; Veeries are expected only in spring in eastern Oklahoma (Oklahoma Bird Records Committee 2014).

Regular reports of presumed fuscescens/levyi extend west to Hall Co and the Rainwater Basin; Jorgensen (2012) noted 13 overall reports in the eastern Rainwater Basin 3-22 May, and there are reports 8 Jul 1988 Howard/Hall Cos and 22 May 2020 Harlan Co.

There are far fewer reports in fall than in spring; Heckscher et al (2020) state that Veeries breeding in the northwestern parts of the range migrate east before heading south and crossing the Gulf of Mexico along with eastern Veeries. Veeries in fall in Oklahoma have been identified as salicicolus (Joseph Grzybowski, personal communication), presumably as a result of this eastward shift in fall.

A very rusty bird at Lake Ogallala, Keith Co 5 Sep 2013 may have been a westerly fuscescens; a probable fuscescens was at Rock Creek SRA, Dundy Co 31 Aug 2017.

There are no summer reports from western Nebraska in suitable breeding habitat, although Veeries breed uncommonly in the Black Hills (Tallman et al 2002, Drilling et al 2018) and in southeast Wyoming (Faulkner 2010). 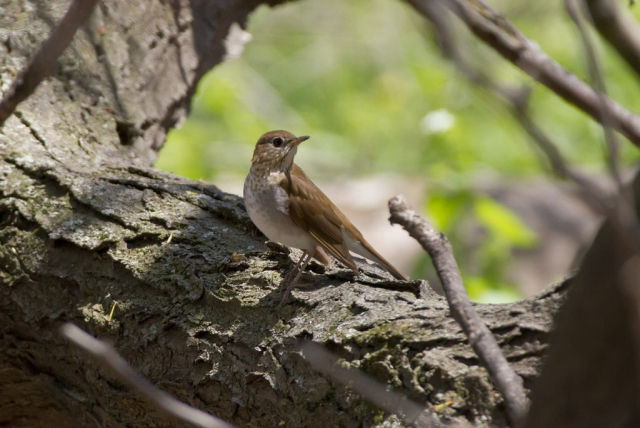 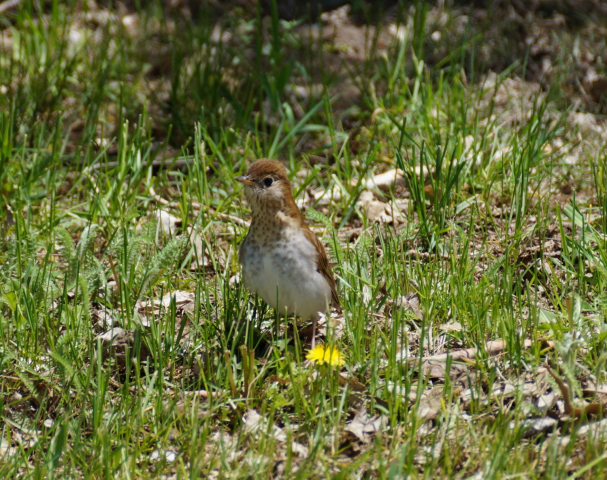