Taxonomy: Thirteen subspecies are recognized, 11 from Mexico to South America, the others flammeus of southern California and southern Nevada to southwest Texas, and mexicanus of southwest Texas and northern Mexico (Pyle 1997).

Pyle (1997) stated that both flammeus and mexicanus are vagrants northeastwards; Ellison et al (2009) noted that mexicanus has occurred as far north and east as Ontario.

Spring: There are seven reports, five documented and the others likely correct; all are listed here.

Fall: There are five reports, including one accepted by NOURC; most are in late fall, 25 Oct-11 Dec, and all probably correct.

4 Nov 1960, headless remains found at North Platte and identified as this species (Viehmeyer 1961)

11 Dec 1954, an immature male that had been present on the grounds of the University of Nebraska Agricultural Experiment Station near North Platte since Oct was collected (Rapp et al 1958, Bray et al 1986). The specimen was mounted and deposited at the Hastings Municipal Museum, where it was observed by Burton Nelson, but the specimen cannot now be located (Bray et al 1986).

Comments: Vermilion Flycatcher has a tendency for wandering northward on the western Great Plains, usually early in spring and late in fall, but there are several mid-summer records. There are 45 records for Colorado (CBRC 2018) and 17 for Kansas, where it nested in 2006 in Morton Co (Thompson et al 2011). There are four records for Wyoming, three of which may have been the same individual (Faulkner 2010), three for South Dakota (Tallman et al 2002), and seven for Iowa (IOU 2018). 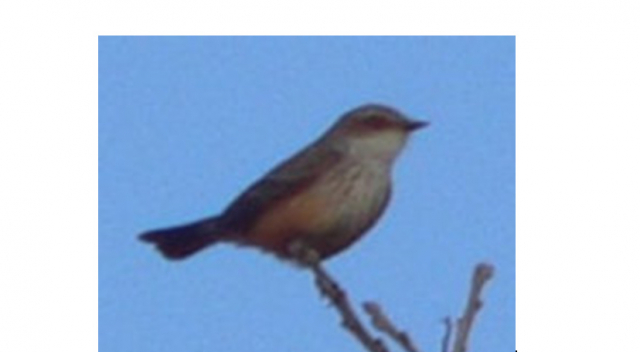